Work for their boss.

Corrupt Businessmen
The Business Men are a group of men who serve as the main antagonists of the Adventure Time episode "Business Time".

They were voiced by Brian Posehn, Jeremy Shada, John DiMaggio, and Pendleton Ward.

Suddenly, Finn started hearing screams for help and looked out side to see the Business Men sucking up some Fuzzy Friends into a giant robot they built. When Finn goes outside and demanded what the Business Men were doing. They said that they were protecting the Fuzzy Friends stating that it was "the most sufficient way to help people." However, Finn was furious over their actions and fires all four of them, which causes the Business Men to fly into a psychopathic rage. Finn tries to defeat their robot but he's to fat to do anything. So, he calls Jake for help which he defeats the robot by eating a whole tub of ice cream and growing from within the robot's tube which causes it to explode and send everyone up into the sky. The Business Men decide to kill Finn for firing them but Finn re-hires them and says that he has one last job for them: freeze themselves back into the iceberg where they were found in and drift away by the sea. The Business Men do so, and once frozen again, they drift away into the sea to never be seen again.

The Business Men Frozen in ice 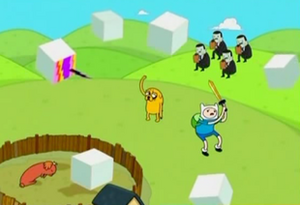 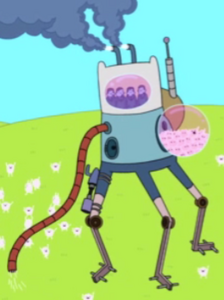 Retrieved from "https://villains.fandom.com/wiki/Business_Men?oldid=3880258"
Community content is available under CC-BY-SA unless otherwise noted.