Buster Dockins (in You Scream, I Scream, We All Scream for Ice Cream)

Buster Dawkins (in Masters of Horror)

You Scream, I Scream, We All Scream for Ice Cream

Kill all those responsible for his death.

He was portrayed by William Forsyth, who also played Pigiron in the 1985 action film Savage Dawn, Flattop Jones in the 1990 film Dick Tracy, Richie Madano in the 1991 action film Out for Justice, and Ronnie White in the 2007 remake of Halloween.

Buster Dawnkins (named "Buster Dockins" in the original short story) was an ice cream vendor who dressed as a clown and entertained children who came to his truck. He was also a bit of a tragic figure in himself, as he was mentally-challenged and had a creepy hole where his nose should have been (covered by the clown nose). This made him a target for the local bullies led by Virgil "Virg" Constance.

On one day, Virgil bullied Layne Bannixter into releasing the parking brake as well as his 4 friends called the "West End Bunch" whom he was the unofficial bully of, to create a distraction, so that Buster would have to chase his truck down a hill. Distracted by counting change, Virgil knocks the coins out of his hands, leading Buster to chase the money downhill. Layne releases the brake but realizes too late that Buster is in the way. The vendor is run over and killed by his truck. The boys retreated, keeping this a ghastly secret.

We All Scream for Ice Cream

The segment begins with a man, one of the boys grown-up, pleading with his son to not eat an ice cream shaped like a human being. The son, encouraged by Buster to get "sweet revenge" and angry at his father for grounding him, eats the ice cream. This causes his father to melt into a thick puddle of ice cream and blood while the child watches on.

Layne, now a father and husband, returns to his hometown following the death of the aforementioned man. He becomes concerned as more of his former boyhood associates turn up dead and reduced to ice cream/blood puddles. He seeks out Virgil, now living in a junkyard and found in a makeshift hot tub, for answers. Virgil Constance taunts Layne and mockingly remarks about how he will be spared due to never having procreated. However, Buster nevertheless gets his revenge on Virgil when he finds Virgil's illegitimate daughter and has her eat the ice cream voodoo doll meant for Constance. As a result, this causes him to graphically melt (with his skin dripping off his arms and body) and leave a horrific mess of ice cream and blood in the hot tub.

Determined to prevent himself from becoming a victim, Layne prepares his own voodoo doll using a strawberry ice cream bar in Buster's likeness (complete with a red dot for the nose). Buster comes and tries to get revenge on Layne, almost killing him with an axe while trying to get Layne's son to eat the voodoo ice cream bar meant to kill Layne. However, Layne's son finds the Buster ice cream bar and eats it, causing Buster to melt like his victims. Layne reunites with his family.

However, Buster's voice is then heard on the wind chanting "You scream, I scream, we all scream..." The final shot of the episode cuts to a jump scare closeup of Buster's frozen face as he snarls to the camera, "FOR ICE CREAM!".

To gain his revenge, Buster has the ability of creating voodoo dolls out of ice cream bars that, when bitten into by the children, causes his targets to fatally melt. He also shows some manipulation skills by playing upon the children's love of sweet treats and their negative emotions towards their fathers, as seen with the opening example. Buster is also completely relentless in his quest to get revenge, often spouting more sinister-sounding renditions of the things he'd say back when he was only a cheery and good ice cream vendor.

Buster also demonstrates some cryomantic abilities with his ice cream truck which is accompanied by a bitter cold mist that causes everything in its proximity to frost, if not completely freeze over. He briefly uses this to trap Layne's wife in her car so she could not help her husband and son. However, he too is susceptible to this despite moving in the frigid temperatures of his truck. During the final confrontation, Layne throws a bucket of water onto Buster, causing him to briefly freeze solid. 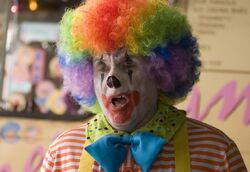 Buster Dawkins aka Buster the Clown. 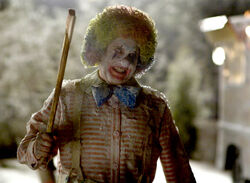 Add a photo to this gallery
Retrieved from "https://villains.fandom.com/wiki/Buster_Dawkins?oldid=3984451"
Community content is available under CC-BY-SA unless otherwise noted.