Protect Fish Mooney (formerly).
Set up his own gang (formerly).
Help Riddler become smart again (formerly).
Find out what happened to him (succeeded).
Return back to normal (temporarily succeeded).

Initially, Butch was the second-in-command to Fish Mooney in the Falcone crime family, before being brainwashed to serve her former umbrella boy Oswald Cobblepot/Penguin. However he is reconditioned by Theo and Tabitha Galavan to betray Penguin and later becomes a crime boss and goes into partnership with Tabitha following her brother's death.

Eventually, he once more forms an alliance with Penguin after they kill a resurrected Theo Galavan for stabbing Tabitha and putting her into a coma. Butch eventually joins up with Edward Nygma, Barbara Kean and Tabitha and becomes one of the major antagonists in both the Mad City arc and the Heroes Rise arc. The third season finale gives the revelation that Butch Gilzean is actually Cyrus Gold, the alter-ego of zombie supervillain Solomon Grundy from the DC Comics Universe, and after being dumped into Slaughter Swamp by Penguin's thugs posing as orderlies, he reemerges as the monstrous Grundy - teaming up with Edward Nygma. Later, Tabitha sabotages Butch and knocks him on the head, thus turning him back to his normal self.

His current goal is to kill Edward Nygma, and therefore, he serves as one of the major antagonists of the fourth season.

He is portrayed by Drew Powell.

Although somewhat destructive and brutish, Butch Gilzean's tough exterior hides a sentimental and emotional side. This side is revealed when he breaks down in tears over Fish Mooney's death and Tabitha Galavan's sustained injuries and hospitalization. Gilzean was deeply steadfast and loyal to Fish, demonstrating more loyalty than usual for a mobster. Even after being kidnapped and tortured into the servitude of Oswald Cobblepot, his sense of loyalty is hard to suppress as he was seen apologizing to Fish after previously shooting her and crying after she was (seemingly) killed by Penguin. Despite being extremely devoted to Penguin, this was only due to the traumatic mental torture he suffered from Zsasz and when Tabitha reversed this process, he betrayed Cobblepot.

With Fish dead and no longer under the control of Penguin, Gilzean became his own man as he was no longer anyone's stooge and opportunistically took full control of Cobblepot's assets when the latter was incarcerated within Arkham Asylum, becoming the new "King of Gotham." Filling the power vacuum that Penguin left in the criminal underworld. Even with this new and slightly ruthless personality, he showed genuine care regarding Tabitha and allowed her to share his power and was even willing to work with Cobblepot to avenge her when she was injured by her resurrected brother. Gilzean is commonly underestimated by many people who see him as a thoughtless toady due to his large and violent frame. Though sometimes appearing thuggish and dimwitted, he also has a good deal of street smarts and knows Gotham better than most. Part of this may stem from always being a henchman and not needing to use his brains or the mental torture he suffered at the hands of Zsasz. In any case, he was intelligent enough to fool Penguin and betray him when he went to save his mother from Theo Galavan.

Unlike many mobsters, Gilzean is a forgiving individual who seemed consent enough that Penguin lost a mother and was broken down enough by Strange's doctors at Arkham Asylum when he entered his house, chose not to kill him but instead tar and feather for cutting off Gilzean's hand, claiming he believed in "an eye for an eye". Furthermore, he was also willing to do anything for Penguin after the latter had Hugo cure him. However, his newfound trust in Penguin ended up getting him killed after Oswald decided to shoot him as part of his payback against Tabitha for killing his mother.

Other than Mooney who he ended up cutting ties with, the one person who Butch truly cares for is Tabitha. Even when she attempted to push him away, he still insists that he loves her and is even willing to put his life on the line to protect her. She eventually reciprocates his feelings and ended up dying herself after trying to avenge his second and final death at the hands of Oswald. 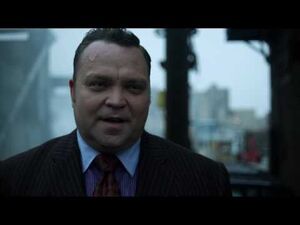 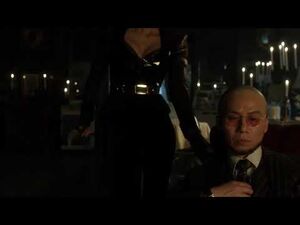 Gotham 4x22-Butch is cured-Penguin kills Butch to get back at Tabitha
Butch's second and final death.