Villains Wiki
Register
Don't have an account?
Sign In
Advertisement
in: Mature, The Boondocks Villains, TV Show Villains,
and 13 more

Beating up people first and asking them afterwards.

Stealing things.
Disrespecting religious and secular authority figures.
Disregarding his parents.
Disliking being told what to do.
Playing kickball.

Do whatever he wants without consequence (mostly succeeded).

Butch Magnus is an over-developed 11-year-old boy who is a bully at Riley's school. He has a severe anger problem, bad manners, a complete disregard for authority, and has a tendency to rob others and ask them for their things afterwards. He appears in the animated tv show The Boondocks.

He was voiced by Daryl Sabara who has also portrayed Wesley Rhoades in the 2007 remake of Halloween.

Butch has a long history of violent tempers and some mischievous actions, a blatant disregard for the law, and a tendency to rob others and ask them for their things afterwards, which made everyone grew evidently sick and tired of him. They even called him new names "Crazy Butch Magnus" and "One Punch Butch".

He was originally sent to a Catholic school called Jesus, Mary and Joseph Academy for Boys which he was later expelled from for assaulting a nun there, and military camp via one of the episodes of the Maury Povich show which did not work either. All these attempts to control him has met with dismal failure and someone injured.

In the episode Shinin, Butch steals Riley's chain, and Riley has to recover it at great difficulty. He first tried to fight him but failed miserably due to being much smaller than Butch. He then hired Ed Wuncler III to capture him but Ed accidentally kidnapped the wrong kid. Later, he hires Flonominal (Flo), a member of Thugnificent's Interjection Crew to attack him but he turns the tables by breaking his leg with a baseball bat. Butch gives the chain back afterward because his father said it was fake and therefore worthless.

He appears in two other episodes first in The Red Ball in which he is hired by Huey to play against the Chinese kickball team, he is injured like everyone else at one point taking a bombardment of shoes thrown by Chinese fans knocking him unconscious.

He also appears in A Date With the Booty Warrior in which he is among the trouble making students taken to the state prison on a field trip. 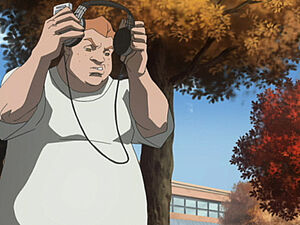 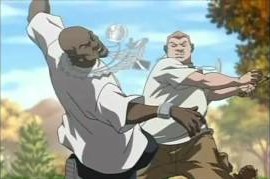 Butch knocks down Flonominal despite being less than half his age. 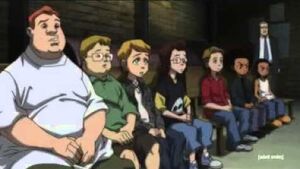 Butch during his cameo in "A Date with the Booty Warrior".