Aggressive Animal
Butch the Bulldog is a supporting villain of the Mickey Mouse franchise. He is mostly Pluto's arch-nemesis where he is the main antagonist of the Pluto cartoons. He is also Peg Leg Pete's pet, as revealed in Mickey Mouse Clubhouse.

His vocal effects were provided by the late Clarence Nash, and currently by Frank Welker. He was also voiced by Jim Cummings in Chip 'n Dale Rescue Rangers.

Butch is aggressive, mean, moody, vicious, gluttonous, greedy and angry. He maybe an ordinary bulldog, but he has done stuff that normal dogs would never do as he has engaged in committing evil deeds such as theft, kidnapping, etc., indicating that he is a villain and actually goes beyond a simply aggressive animal. In fact, he even tricked Pluto's little brother into stealing wieners.

Although Butch is bigger and stronger than Pluto, he often fails possibly because Pluto is more clever or Butch has a lack of intelligence.

Despite being a villain, he is sometimes neutral, and nowadays he became less antagonistic then he was before, and seems to be more neutral, but it is unknown if he is redeemed or not. In addition, he was depicted as a hero in Chip 'n Dale Rescue Rangers, which was the only time Butch was a hero. Other than that, Butch is not a hero in the rest of his appearances.

Butch is a slender gray bulldog with a dark gray muzzle and a red collar with gold spikes.

He resembles other cartoons bulldogs such as Spike from Tom and Jerry and Hector from the Looney Tunes Sylvester and Tweety cartoons. 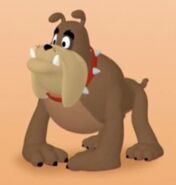