Bring his wife back to life.

Butcher B is the main protagonist of the Google Play/Apple store video game Scary Butcher 3D.

Butcher B lives in a small city of Eyrie, with his wife Elena. The two were an extremely happy together, until one stormy night, Elena got very sick, inside of their house. She was laying in the bed dying, while Butcher B couldn't do anything except to watch her suffer.

Once she passed away, Butcher B became totally different and aggressive. Out of all frustrations, he chopped their cat to pieces and ate it. Since then various pets started disappearing all over the town. Some believe that the Butcher B is the one who is stealing and eating the pets. 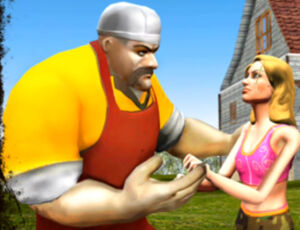 Butcher B with his wife Elena.
Add a photo to this gallery
Retrieved from "https://villains.fandom.com/wiki/Butcher_B?oldid=3314121"
Community content is available under CC-BY-SA unless otherwise noted.