Sending Zuno Beasts to cause havoc

Chibuchian Butchy is a member of Armed Brain Army Volt and a supporting antagonist in Choujuu Sentai Liveman.

He is an alien from the planet Chibuchi, who joined the Volt to study under Bias, having heard of his genius from across space. It is later revealed that he is actually a robot created by Great Professor Bias to motivate his students to work harder.

Like Guildos, Butchy was constructed by Great Professor Bias as a way to motivate his students to study harder and programmed with fake memories to make him believe he was an alien from the planet Chibuchi.

After Butchy arrived claiming to be an alien from the planet Chibuchi, he created Guitar Brain to use to broadcast a song that would put humans to sleep. While the other Volt members were annoyed by Butchy singing and roller-skating around the Brain Base, Bias found it amusing and allowed it to go on since Butchy was making progress in his scheme. However, Megumi and Kumiko managed to thwart his scheme by playing "Spark! To the Ocean", which woke the humans up from the slumber Butchy had put them in, before the Livemen destroyed Guitar Brain.

Afterwards, Butchy frequently collaborated with Guildos, another supposed alien serving Bias, in his schemes. After Bias unveiled the Volt scoreboard and showed that Butchy was in dead last, Guildos assured Butchy that that was only because he didn't have as many opportunities to create Brain Beasts and that they would increase it soon.

After Guildos was revealed as a robot and destroyed, Butchy began to wonder if he too was a robot and performed a test on him to make sure, only to find out he was, to his shock. Despite this, Butchy refused to believe he could be a robot because of all his happy memories on Chibuchi and went to ask Bias about it. Bias however, nonchalantly admitted that his happy memories were programmed into him and that he had only created him and Guildos to motivate his other students to try harder. Despite this, Bias told Butchy he had to keep serving in Volt and demonstrated his remote control, which he used to forcibly levitate Butchy, in order to cow him into submission.

Bias then had Butchy create another Brain Beast, the Reckless Brain, and sent them both out to rampage across a city. The Livemen quickly responded and tripped Butchy and the Reckless Brain as they were skating around, but soon noticed that Butchy was crying. Butchy attempted to use his eye beams on them, but could not as his tears were in the way. While the Livemen fought off Reckless Brain, Butchy suddenly heard "Spark! To the Ocean", the song he had first heard after he came to Earth, and dropped his mission to begin dancing to it. Bias then ordered 300 points be deducted from Butchy's score, scaring Butchy into continuing his mission. However, Megumi took notice of Butchy's dancing and approached him while playing the song on her keytar, leading Butchy to drop his mission again to listen to it. Bias then ordered Butchy's score be dropped down to 0, but Megumi persuaded Butchy to give up on his mission and live on Earth in peace, asking him if he wanted to dance with her. Butchy accepted, but before he could, Bias activated his self-destruct, causing him to begin to explode before Megumi's eyes. With his last breath, Butchy expressed his happiness at having met Megumi before dying.

His death was sad for Megumi, who later dreamed of dancing with him after his demise. The Liveman vows avenge him saving the Earth. 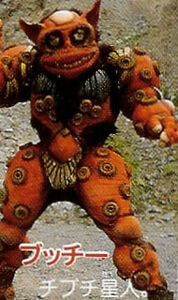 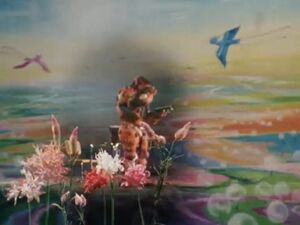 One of the fake memories Bias programmed into Butchy.