Butt-ler is an on-and-off antagonist in Pac-Man and the Ghostly Adventures. The long suffering personal servant of Betrayus, Butt-ler is usually loyal to him, even when Betrayus constantly forces him to do much of everything. Despite this loyalty, he sometimes team up with Pac-Man on some occasions. Butt-ler is also the twin brother of Dr. Buttocks, and the two have a sibling rivalry, as they both despise each other.

He was voiced by Brian Drummond.

Butt-ler is a purple ghost with white hair and mustache, a butt-shaped forehead, and wears a short black bowler hat. When alive, he had a round purple body, sky blue eyes, and wears black short gloves, brown soldier boots, and a bronze helmet during the two Pac-World Wars.

Prior to the events of the series, Butt-ler, under the alias "Corporal Hineyhead", served Commander Betrayus during the time he lead a massive revolt against Pac-World (which resulted in the Pac-World Wars I and II).

He worked as a spy for him, presumbably spying on the Resistance's (an organization who is on Pac-World's side) plans so Betrayus could be able to march ahead before those plans can proceed.

However, following Betrayus' defeat, Butt-ler was also stripped out of his corporeal body and was imprisoned alongside the others.

Butt-ler is loyal to Betrayus, and he is mostly annoyed and despises his twin brother Dr. Buttocks. However, he is only loyal because Betrayus forces him, and sometimes, when given the opportunity, Butt-ler can take advantage of him 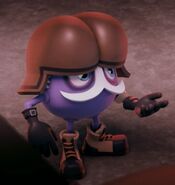 Retrieved from "https://villains.fandom.com/wiki/Butt-ler?oldid=4309100"
Community content is available under CC-BY-SA unless otherwise noted.