Member of the Cult of Nix

Serving Nix and his cult.

Avenge the death of his master Nix (failed).

Resurrect Nix and fulfill his diabolical vision of cleansing the world (failed).
Seek revenge on Phillip Swan and his wife Dorothea (failed).

Butterfield is a follower of Nix whose black magic cult that he is a member of, and he is a villain in the 1995 horror/fantasy film Lord of Illusions (Clive Barker's Lord of Illusions) loosely based on the short story The Last Illusion (from Books of Blood Vol. 6) by Cliver Barker.

He was portrayed by both J. Trevor Edmond as a teenager and Barry Del Sherman as an adult.

It all begin in the Mojave Desert of California in 1982, inside a house that has become the headquarters for a cult led by a man named Nix. Nix has the ability to use real magic and not just mere illusions. While preaching, he tells his followers that he has been named "The Puritan". because a strange fire that he shown he once chosen by, and tells everyone that it is their destiny to cleanse the world. A young follower named Butterfield comes to Nix and informs him that a man named Swann is there.

Swann and the others were previously part of the cult, but left, and are now returning to stop Nix, who has kidnapped a young girl and is planning to kill her. Outside in the desert, Swann and his friends Pimm, Quaid and Jennifer start walking to the house as they load and cock their guns, preparing themselves. After some relatively non-violent confrontations with other cultists, Butterfield escapes and Swann is attacked by Nix, who uses his powers, digging his fingers into Swann's head and showing him the vision of “Flesh with a God's eyes", which alters his perception, making him see his friends as monstrous and frightful figures. Swann throws away his gun and attacks his friends. Suddenly, Nix is shot from behind by the kidnapped girl, and then Quaid and Jennifer bring him to the ground by shooting him. Swann snaps out of his vision and takes out an ironwork mask he made for “binding” Nix. Once the mask has been assembled onto Nix's head, he thrashes violently for a few moments and appears to die. Swann declares that they will bury him so deep that no one will ever find him.

While the Cult of Nix comtemplate Nix's death, Butterfield ran outside the cult compound and then stopped, looking back at what happened there. He swore to avenge his mentor's murder.

Return of the Puritan

Jumping ahead 13 years later in New York, we are introduced to Harry D'Amour, a private detective who is currently in the newspapers for being tied to an exorcism that took place in Brooklyn. D'Amour has an interest in the occult, which is reflected in his home, where he keeps all types of occult trinkets and baubles. D'Amour's boss gets him a job going to Los Angeles to investigate an insurance fraud case. While following the target of his investigation D'Amour ends up at a fortune tellers shop. D'Amour learns that the shop is owned by an older Quaid. No sooner does D'Amour sees Quaid, he is attacked by a bald man. D'Amour knocks him out with a sculpture and enters the room where Quaid is. He finds him sitting at a table with tarot cards on it, and with several scalpels sticking out of him. The bald man attacks again, but D'Amour shuts the door, knocking him down again. Inside the room D'Amour discovers Butterfield, who has changed considerably over the last 13 years. As Butterfield walks off, the bald man starts tearing through the door. When he enters, D'Amour tosses him out the window. Quaid warns D'Amour that “The Puritan” is coming, and dies from his wounds. Later, while Harry tells the police what happened, they go out to look at the bald man's body, but he is nowhere to be found.

Meanwhile, in Swann's mansion (who has made a rather comfortable living as a big name illusionist), his wife Dorothea Swann (Janssen) talks with him. Swann tells her that Quaid has been murdered by Nix's followers. Dorothea asks Swann's assistant, Valentin (Swetow), to hire D'Amour. While riding with Valentin, D'Amour calls Swann a magician, and Valentin quickly corrects him saying Swann is strictly an illusionist. When D'Amour asks what the difference is, Valentin tells him that "an Illusion is trickery but a Magician does it for real". Valentin takes D'Amour to Quaid's funeral, where he meets Dorothea Swann, who asks him to investigate Quaid's murder. D'Amour agrees to work for her and she invites him to Swann's show in Los Angeles. During the show, Butterfield and the bald man are among the public. Swann starts his new illusion involving swords falling while he picks the manacles holding him down, but something goes wrong and several swords fall in the wrong way, killing him. After the accident, D'Amour investigates under the stage, where he is attacked by Butterfield and the bald man. This time D'Amour manages to kill the bald man by impaling him on a prop. Harry decides to stay and look into what actually happened to Swann. He goes to a club for magicians and illusionists called "Magic Castle". There he meets an older magician named Walter Wilder. Wilder tells D'Amour about another magician named Vinovich, and he takes D'Amour to a room called The Repository, which contains the secret to every magic known to man. There are only three keys to the room and Vinovich has one of them, but he refuses to use it for anybody. Later Harry meets another Illusionist called Billy Inferno, who mentions he has heard the name Nix mentioned as a legend, but he believes he is the one that taught Swann to use real magic.

D'Amour asks Dorothea if she has ever heard the name Nix before, which she denies. He returns to Quaid's Fortune Teller shop, where he finds an address book with the whereabouts of Jennifer Desiderio, who was missing and now lives in a mental asylum. D'Amour goes there and sees she has lost all grip on reality. After asking her about Swann, she loses control and screams that she's afraid of Nix and that he is the one called The Puritan. She runs off into the street where she is hit and killed by a car. D'Amour enlists Billy Inferno's help to get into The Repository, where they finds old books hidden inside a wall. Harry looks through them and learns some things about Nix and how Swann was not doing illusions at all, but using real magic he had learned from Nix. D'Amour returns to the Swann residence and talks to Dorothea, who explains that she was the young girl that Nix kidnapped, and that she had married Swann because she felt she owed her life to him. Dorothea and D'Amour make love, and soon after that, he is attacked by a man made from fire. Harry suspects that it was Swann's doing, so he opens his coffin, and sees that the body inside is a fake one. Valentin explains that he helped Swann fake his death and the fatal illusion was purposely made to fail. D'Amour accepts Valentin and Dorothea's decision to allow everyone believe that Swann is truly dead. At the funeral Harry spots a man in a hat and follows him. He turns out to be Swann, who knows about Dorothea's affair, and attacks Harry again with his magic. Nevertheless, D'Amour convinces Swann to help him put an end to Nix's cult. Later that night, Butterfield goes to Swann's house, where he attacks Valentin and kidnapps Dorothea. Swann and D'Amour make it back to the house and quickly understand what has happened. Swann reveals that Dorothea doesn't know where Nix is buried, but Valentin does.

Butterfield holds Dorothea hostage while Valentin digs, trying to find Nix's body. When he does, Butterfield takes it back to the old house in the Mojave Desert, where the other cultists have already arrived, and are preparing themselves by shaving their heads and chanting for Nix's return. Shortly, Swann and D'Amour arrive at Nix's grave and find a badly injured and dying Valentin, who explains to them what happened and dies from his wounds. Back at the old house, Butterfield starts the process of resurrecting Nix, using tools made by himself to remove the iron mask. Nix regains consciousness quickly. After addressing the cultists, he sees Dorothea and recognizes her as the little girl that had shot him. Swann and D'Amour arrive at the house. Butterfield attacks D'Amour. Swann then takes on Butterfield and asks D'Amour to save Dorothea. Swann blows fire from his mouth, badly burning Butterfield. Meanwhile, Nix tells his followers to prepare to receive his wisdom. He makes a hole open below him and Dorothea, and while the two of them are levitating over it, he causes to rain in the room and make the ground turn to quick sand, swallowing up the cultists. He expresses that only Swann is worthy of receiving his knowledge.

D'Amour finds the room where Nix and Dorothea are just when Nix is dropping her into the hole. Harry grabs her hand just in time. While D'Amour is struggling to get Dorothea pulled back up to the ground Swann enters the room. D'Amour and Dorothea try to leave and are once again attacked by Butterfield, who after a short fight with Harry punches through the wall and into electrical wires, electrocuting himself to death before moments later the ultimate of his lord and master. 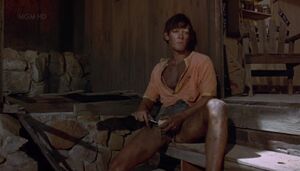 Young Butterfield, a member of the Cult of Nix and Nix's most faithful disciple.
Add a photo to this gallery
Retrieved from "https://villains.fandom.com/wiki/Butterfield?oldid=3341122"
Community content is available under CC-BY-SA unless otherwise noted.