Royal gardener for the Sorceress (formerly)

Jumping
Able to turn his body into a rolling buss saw.

Gardening at the Sorceress's Castle (formerly).

Eliminate Spyro and his friends (failed).

Buzz is one of the Sorceress' monsters and a minor villain in Spyro: Year of the Dragon.

Buzz's past is unknown though he was a mere Rhynoc, following his transformation. At the Sorceress' castle in Midnight Mountain, he was seen wearing a gardener's hat and holding a flower pot showing that he might be the Sorceress' royal Gardner. He was later transformed by Bianca under their queen's command.

He was sent to a dungeon arena near the Sunrise Spring realm within the Forgotten Worlds and was encountered by Spyro and his kangaroo friend Sheila, who was traveling by balloon to Midday Gardens. Buzz attacked but was easily defeated by the duo. Spyro, who knocked him into the lava by charging him, which he was forcefully head-smashed into the lava by Sheila, releasing a Dragon Egg upon his defeat and they moved on to the next homeworld.

Toads that resemble Buzz's toad form also come out of eggs in the battle against Scorch.

Buzz has three phases. The first one is just where he jumps to an area next to him. The second is a fire ring erupting, and the third is where he spits fire out.

A simple strategy to shorten the battle is to run just ahead of Sheila around the outer ring of the arena after Buzz jumps out of the lava. He will bump into Sheila and stop spinning, allowing Spyro to turn around and knock him straight back into the lava again. 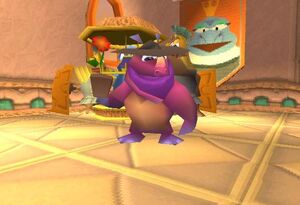 Buzz as a Rhynoc before his transformation. 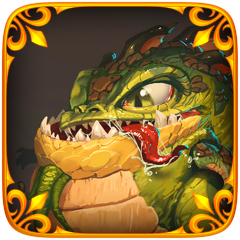 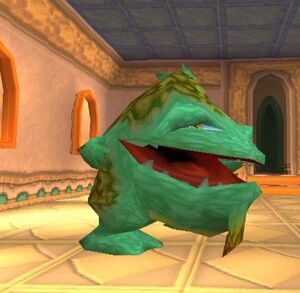 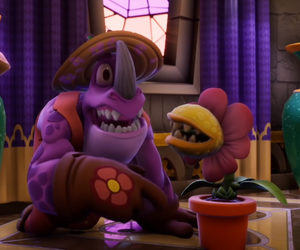 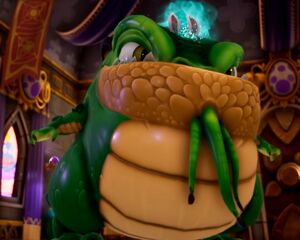 Retrieved from "https://villains.fandom.com/wiki/Buzz_(Spyro)?oldid=3960842"
Community content is available under CC-BY-SA unless otherwise noted.