The Bridge to Body Island

Tormenting its victims before killing them.

Spreading chaos.
Spreading the very thought and mere mentioning of his haunting name onto more living victims like a plague.

Drive Elliot and his friends to madness before beginning anew (succeeded).

The Bye Bye Man, sometimes spelled "Bye-Bye Man", is the main antagonist of the 2017 supernatural horror film of the same name. He is a demonic boogeyman-like figure of unknown origin, who will stalk and kill anyone that thinks and/or says his name.

He was portrayed by Doug Jones, who also played the Pale Man and the Faun in Pan's Labyrinth.

Sometime in 1969, a teenaged boy massacres his family members. When he was apprehended by the police, he claims that the Bye Bye Man made him do it. A reporter for a local newspaper by the name Larry Redman falls victim to the Bye Bye Man's influence upon hearing his name, which causes him to kill his friends and family out of fear that the name would spread. Before committing suicide, he sees the Bye Bye Man standing among the carnage. Only his widowed wife was spared due to the fact that he never uttered the name to her nor had it written down for her.

Nearly five decades later, three Wisconsin college students - Elliot, Sasha, and John - rent a house. While settling into the house, Elliot finds a nightstand and discovers writing underneath it. Carved into the wood was the repeated words "Don't think it, don't say it," and "the Bye Bye Man." Elliot says the name aloud, and unwilling to believe that such a creature existed, asks for Sasha's friend, Kim, to conduct a seance.

Sasha begins to feel sick for unknown reasons. Not only this, but the trio of friends begin having vivid visions of which nearly causes them to turn against each other. Scratching is also heard at night among other oddities. Wanting answers, Elliot heads to the library, but when he attempts to search for "Bye Bye Man," no results appear. However, once he types in the phrase "Don't say it, don't think it," he finds one result. It was revealed to have been written by the reporter who was introduced earlier in the film, but he hid it away by making it into a dead file, meaning that it was never published. Elliot unintentionally spreads the curse of the Bye Bye Man to the librarian who began to suffer from nightmarish visions before slaughtering her own children.

Elliot discovers that the nightstand belonged to the reporter only to further learn that the widow of the reporter was still alive. Elliot goes to her house demanding answers, realizing that she was never told the name of the Bye Bye Man. Elliot comes to the conclusion that as long as he did not think about the Bye Bye Man's name, he had power over it. It seems as though his hypothesis was proven correctly, at least until he accidentally hits the librarian from earlier. Elliot arrives back to the house, and thinks he sees John attempting to stab Sasha with a pair of scissors. He tackles John, and he shoots him. However, it turns out to be another illusion; Elliot actually shot Sasha, killing her. To make matters worse, Elliot is horrified to discover that his older brother and his niece are outside, knocking on the door. The Bye Bye Man attempts to force Elliot into saying his name so that he could terrorize more victims, but Elliot shoots himself in the head in an effort of saving his loved ones from the same fate. 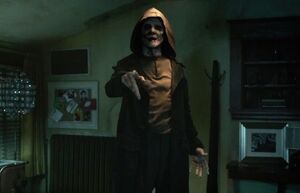 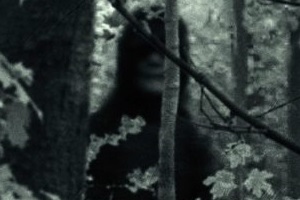 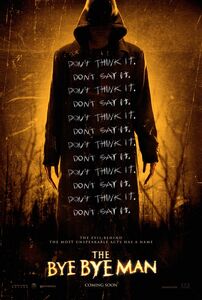