Coerce Andy Dufrense into submitting to his rule (failed).

He was portrayed by Clancy Brown, who also played Viking Lofgren in the 1983 film Bad Boys, the Kurgan in the 1986 film Highlander, Mr. Krabs in Spongebob Squarepants, Undertow in The Little Mermaid II: Return to the Sea, Dr. Neo Cortex and Uka Uka in Crash Bandicoot, Savage Opress in Star Wars: The Clone Wars, Hades in God of War, Lex Luthor in the DC Animated Universe, Grune in Thundercats, Mr. Sinister in Wolverine and the X-Men, the Evil Entity in Scooby-Doo! Mystery Incorporated, Rahzar in Teenage Mutant Ninja Turtles, Surtur in Thor: Ragnarok, Edgar Volgud in Atlantis: Milo's Return, General McGuffin in Wander Over Yonder, and Kojak in Recess: School's Out.

Captain Hadley is a very cruel, loutish and sadistic man who frequently abuses his authority by brutally beating inmates and sometimes killing them, often for petty reasons. This also includes beating up a new inmate that is addressed by the other inmates as "Fat-ass." The next day, Fat-ass dies from the blows that Hadley gave him for not keeping his mouth shut, showing he absolutely does not care about the prisoners. This make him feared by the inmates. He is also a complainer, by inheriting a lot of money of his dead's brother and complaining about the payments on it. Unsympathetic and corrupt, he gets angry pretty easily with the inmates, whatever the minor things they do and shows many signs of enjoying making them suffer.

Despite Hadley's cruelty, he seemingly softens up to Andy Dufresne after the latter helped him with his money he inherited from his estranged brother (by giving the $35,000 in full, tax free, to his wife). He helps Andy rid of Bogs although it was purely for selfish reasons. He has a wife and children, however, it is unknown if he genuinely loves them or if he is abusive toward them. However, despite briefly becoming softer towards Andy, he starts abusing him again once he starts stirring up trouble.

He brutally beats up Bogs Diamond (the head of "The Sisters" prison gang) after finding out that the latter had been raping and beating up Andy since Andy is too useful for him and Norton in dealing with financial matters.

Later on, Warden Norton orders him to murder Tommy in order to keep him from proving Andy innocent. He is then arrested for this after Andy escapes with the ledger containing all the info about the corruption and the murder(s) that Hadley committed, avenging the deaths of all prisoners he killed, such as Fat Ass and Tommy. According to Red, it was rumored that Hadley had cried like a little girl once he was arrested, likely because he will be incarcerated in the same prison he guarded and will have to endure retaliation (and possibly murder) from all the prisoners he bullied and abused for years. 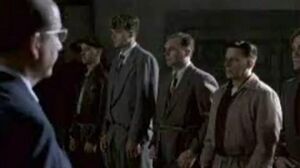 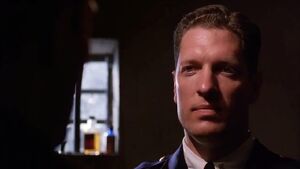 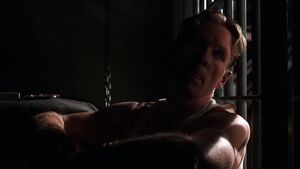 Retrieved from "https://villains.fandom.com/wiki/Byron_Hadley?oldid=4018089"
Community content is available under CC-BY-SA unless otherwise noted.