Byte is a major antagonist in the Mega Man X series, appearing in Mega Man X3. He is part of the Nightmare Police, and the partner of Bit.

Byte was a police reploid in the utopian Doppler City. When all reploids on the city became mavericks, Byte became one as well. Dr. Doppler, sensing the threat of the Maverick Hunter X, hires him and his partner Bit to take care of X. X is intercepted by Byte during one of his missions, who engage him on a fight. Byte is defeated and forced to retreat, so Dr. Doppler makes an enhancement on him, enabling him to fuse with Bit to become more powerful. When X invades Doppler's lab, both him and Bit hold him, fusing together to form the Godkarmachine O Inary. With their combined powers, they fight X once again, but X prevails, destroying both of them. 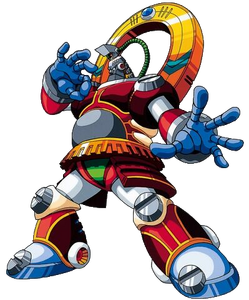