Investigative anybody in cases connected to ghouls.

Protect the civilians of Japan from any potential harm caused by ghouls.
Destroy Aogiri Tree (all formerly).
Take down the both One-Eyed Owls.
Destroy V and bring peace. (both succeeed).

It is the (former) front of the evil V. It is an organization based in Japan. The CCG is seen attempting to kill all of the Ghouls within Japan and is at odds with the Aogiri Tree.

In chapter 83 of Tokyo Ghoul Re it revealed that the Washuu clan, the top members of CCG, were actually ghouls themselves, vowing to control the world.

Founded in 1890, the Commission of Counter Ghoul was created in order to suppress the presence of Ghouls within Japan and to quell Ghoul terror against civilians. Under the Ghoul Countermeasures Law, C.C.G. is allowed to persecute and prosecute all Ghouls and even torture them to the extent of the law. The law also makes all Ghouls illegal and has given the CCG all the authority it needs to kill the Ghouls.

During the events of Tokyo Ghoul, C.C.G. is seen forcing Ghouls into hiding and now Ken Kaneki, a former human turned Ghoul must hide from. The first Ghoul Investigators to appear are Kureo Mado and his partner Koutarou Amon as they are hunting down every ghoul they see and manage to acquire the vlades from a building after Rize Kamishiro and Yakumo Oomori had a short fight with each other. Later on in episode 3, a Ghoul family is forced into the 20th Ward and more Ghoul investigators begin to show up. Eventually, towards the end of season 1 of the anime, the CCG is placed on high alert after the Aogiri Tree led by the One Eyed King, had killed every Ghoul investigator in the 11th Ward and have taken over the entire ward. This forces the CCG into a state of emergency and begins to rally in forces from all over Tokyo in hopes of preventing Aogiri from taking more territory and possibly attack Tokyo itself.

This eventually leads to Aogiri attacking the Ghoul Detention Center in the 23rd Ward where thousands of powerful and deadly ghouls are being held at. The Prison Security Forces are quickly overwhelmed and whipped out as the Aogiri Tree's forces and commanders are seen killing the guards and letting all of the prisoners out of jail and have then join Aogiri in exchange. Reinforcements are eventually deployed and are sent in but only when all of the prisoners have been released. The CCG continues to remain active and continues to confront Aogiri. At one point in time, the CCG had gained information about Anteiku in the 20th Ward and was a secret ghoul organization. Dozens of CCG soldiers are sent in and engage Anteiku employes and the gangs they once led in the past. Ghoul Investigators eventually come in and manage to defeat them until entire armies of Aogiri Soldiers come in and ambushes them. The remaining CCG forces appear to be cut off when reinforcements come in from behind and they begin to repeal the Aogiri Forces and push them back. Anteiku gets destroyed and the restaurant burned down and all remaining forces pull out and regroup afterwards.

After the time-skip, the CCG has organized a new division known as the Quinx Squad, a small squad of CCG soldiers who are Quinx, humans with quinque inside their bodies and sends them after high-level targets. During this time, Kaneki has now gone under the alias as Haise Sasaki and is completely naive to his original self. During this time, the CCG begins investigating a ghoul known as Nutcracker who is connected to the Ghoul Restaurant and Big Madam. Eventually, the CCG discovers an auction going on and launches an all-out assault during the event. During this time, former Rank 2 Investigator Seidou Takizawa makes a return as a monstrous Artificial One-Eyed Ghoul and begins to slaughter the CCG Forces. At the end of the raid, countless ghouls have been killed and Arima and his squad arrive. Arima gives Sasaki rights over Hinami Fueguchi and she is captured but is kept under Sasaki's authority but Arima gets suspicious of Sasaki. Later on, the CCG discover the location of the Tsukiyama Family and an extermination operation is launched in an effort to kill them.

The Leadership of the CCG is head by the Chairman of the organization. The current acting chairman is Tsuneyoshi Washuu and is leading the mission to exterminate the ghouls. The second in command of the organization is the Bureau Director and is currently held by Yoshitoki Washuu. Other high-ranking officials include senior investigators and other high-ranking Ghoul investigators.

IIn the past, the CCG had sent out its members to various countries all across the world. In Germany, Investigator Washuu was sent in to assist the German Authorities of killing the Rosewald Family and in China, Investigator Houji was deployed to assist Chinese Authorities in taking out the Che She Lian organization in the country. In Germany, there is also a Ghoul Research Organization where multiple CCG members have worked at in the past and assist in studying and analyzing ghouls.

The main goal of the CCG is for the immediate extermination of every single Ghoul in Japan. Ghouls have been a major problem in the wards and the CCG has been forced to send in investigators to these wards. The CCG has vast quantities of soldiers and other military forces and is well equipped with the ghoul of exterminating the ghoul race. Naturally, this has led to the rise of Aogiri as the Aogiri Tree themselves plans to fight back and make Ghouls the only dominant species over humans and they are the biggest threat to the CCG. 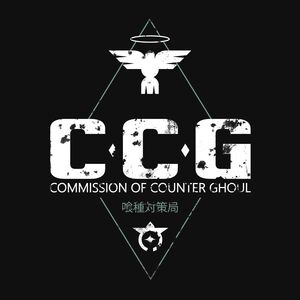