Villains Wiki
Register
Don't have an account?
Sign In
in: Pages with broken file links, Game Bosses, Misanthropes,
and 25 more

He is voiced by Milton James. 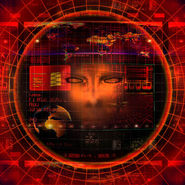