He was voiced by Abraham Benrubi, who has also voiced other characters in the show, including the show's version of the Great Pumpkin and Fidel Castro.

CD debuts in the sketch Zune Man from season 5 episode "Malcolm X: Fully Loaded". Here he gets into an argument with the eponymous Zune Man when both of them attempt to kill Steve Jobs. When Jobs notices them and calls CD out as outdated, CD resumes his murder attempt only for the businessman to shoot and kill him in self-defense.

Despite his death in the previous sketch, CD returns alive and well among those answering phones in the end of the sketch B.A.G. Pipes from the episode "The Core, The Thief, His Wife and Her Lover".

CD makes his so far last appearance in the show's 100th episode titled "Fight Club Paradise". Here he is featured in the episode's final sketch called The Rescue where he is among Fritz Hühnermörder's defenses tasked with preventing the show's titular cyborg chicken from rescuing his wife. He is seen when he attempts to attack the bionic bird from behind approaching from behind the stairs while saying his catchphrase "Have at thee!" when the Bloopers Host is talking only to be made fall down the stairs he walked up head first with a single punch, presumably killing him.

CD appears to be a homicidal and violent person, given the fact that he attempted to attack both Steve Jobs and the show's titular cyborg chicken in two separate appearances of his. Nevertheless, he is very incompetent in what he does, as he was easily defeated and seemingly killed when he tried to attack them. Additionally, he has a habit of saying "Have at thee!" when he proceeds to carry out his attack attempt. 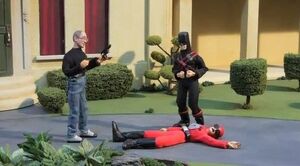 CD's lifeless body after being killed by Steve Jobs.