Iron Butt (does not like to be called that)

Having the sense to know when he is down.

To have OCP gain partnership and business contracts with the Kanemitsu Corporation and to stay rich (all failed).

The "CEO" is a wealthy businessman who was the successor to the former Chief Executive Officer of Omni Consumer Products, better known as the "Old Man" and a minor character and anti-hero in the critically despised sequel RoboCop 3.

He was portrayed by the late Rip Torn.

The CEO presumably came into this position when OCP was acquired by the Kanemitsu Corporation, he was later fired by the corporation's namesake owner Kanemitsu himself after the death of Paul McDaggett.

While he seemed a competent businessman, he was a blowhard at best. However, he did seem to have the sense to know when he was beat. 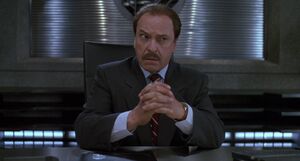 The CEO, the new chairman of OCP.
Add a photo to this gallery

Retrieved from "https://villains.fandom.com/wiki/CEO?oldid=3911298"
Community content is available under CC-BY-SA unless otherwise noted.