Depending on which version

Defeat the G.I. Joes (both failed)

Cobra Command, also better known as COBRA, are the main antagonistic faction in G.I. Joe. They are an evil terrorist organization bent on ruling the world, founded by Cobra Commander, and kept in control by the members of the high staff of Cobra.

Cobra Commander is the leader and founder of the Cobra Organization. He is the commander and chief of the Cobra Armed forces and all operations his organization is involved with, and takes an avid part in planning and strategy.

The Baroness (born Baroness Anastasia DeCobray) is Cobra's head of intelligence and espionage missions (second only to the COBRA Commander).

Dr. Mindbender is a mad scientist and former dentist. He is responsible for many breakthroughs for the Cobra Organization, including the Cobra BAT, several mind-control devices, and many different genetics experiments.

Leader of the Crimson Guard and Head of Cobra Economic Affairs

Tomax and Xamot are identical twins with an empathic link that allows them to feel each other's pain and gain the strength of each other. Because of this, they train the elite Cobra Crimson guard, but are more respected for their skills in the board room than that of combat.

Storm Shadow is a ninja of the Arashikage clan that specializes in assassinations, and is the personal bodyguard of Cobra Commander.

Aids to the Cobra Organization

Destro, or James McCullen Destro XXIV, is a weapons dealer for MARS (Military Armaments Research Syndicate) Industries, whose number one client happens to be Cobra. Because of this, he is considered a member of the Cobra Organization, as he is often allied with Cobra. Similarly, Zartan, a master of disguise hired gun and his group (the Dreadnoks) often do missions for the Cobra Organization and it would appear that they have no real other clients.

Major Sebastian Bludd is a mercenary who works for Cobra with extensive military combat and serves as Cobra's Head of Infantry Deployment and field command.

The man only known as Firefly has little to no known background, other than being the world's greatest saboteur. He destroys not only quickly and effectively, but untraceably. He is completely loyal to the Cobra Organization.

Blackout was aspiring to become a part of GI Joe, but was denied access when he failed his psychology exam and was later determined a suspect in the disappearance of his sister. Because of this, he subsequently surrendered to and joined Cobra and now heads their sharpshooter corps.

Scrap-Iron is a Cobra specialist who leads a core of troopers who specializes in anti-armor take downs.

These are the blueshirted grunts with standard military equipment. They are led by Cobra Officers that report to the office of Infantry Deployment.

The Cobra Viper is the slightly more upgraded version of the Cobra Troops. They are equipped with superior armor and weaponry, as well as more extensive combat training.

An elite core of soldiers that serve as the end-all-unit for the Cobra Organization. They perform all kinds of high importance missions, often posing as civilians or serving as the honor guard to the Cobra High Staff. In addition to extensive military training, they are also required to have degrees in accounting or law, as they also maintain the legal and financial side of Cobra.

The Python Patrol is a group that's members are hand-picked by Cobra Commander. They are known for their revolutionary stealth coating technology, masking their suits and vehicles from most to all forms of military detection.

Castle Destro is Destro's Castle (aptly named) in Scotland, and serves as a military headquarters for both Cobra and MARS Industries.

The Cobra Citadel, also known as the Silent Castle is Cobra's Base of operations in Eastern Europe, and is located in Trans-Carpathia. Created and primarily owned by Destro, the base is outfitted with many secret passageways, and perhaps most of all, through a massive series of gears, pulleys and levers, it can shift its appearance into an exact replica of Castle Destro.

Cobra Island is the base of all Cobra Operations. Cobra caused a massive earthquake to create this island. Cobra lawyers quickly seized it and declared it a sovereign nation. It was equipped with all things needed to run the entire organization. It was eventually taken by the UN when Cobra disappeared, but was quickly seized back from them when Cobra made its return.

The Cobra Consulate is a large building in New York City that serves as the embassy to the US after Cobra Island became its own nation. Many floors were destroyed in a fight against GI Joe.

Springfield, USA was where Cobra began and served as a base for covert missions. It was a poor place, but was made substantially wealthy by the foundation of Cobra.

Broca Beach is a US town that Cobra eventually commandeered after the loss of Springfield.

Helicarrier, also known as the Cobra Airship is a massive flying palace in the shape of the iconic Cobra emblem. When it was first brought into battle, it collided with GI Joe's aircarrier and both sank into the sea. Another one was commissioned, but was brought down over Liberty Island in New York City.

Millville was a poor steel producing town that swayed to Cobra Commander when he promised them an economic future. They were then brainwashed. However, after a battle between Autobots and Decepticons, much of it was destroyed, forcing Cobra to pull out of the town.

In order to keep the cash flowing and to hide certain aspects of its operations, Cobra manages to infiltrate the free market with a number of legitimate business fronts. Most of them are anagrams of the word 'Cobra'.

Naja Trading Corp has offices in both San Francisco and Rio Lindo in the Republic of Sierra Gordo. Cobra used it to smuggle MX missile guidance chips out of the country inside of video game fronts. Naja is Hindi for Cobra.

Arbco is the largest and most prominent Cobra front. It started in Springfield, but grew to have offices in at least ten major cities. It encompasses the Arbco Furniture Company, which held a secret testing lab within for a deadly plague toxin in Springfield, Vermont. Arbco Moving and Storage used trucks to transport HISS tanks covertly into Washington DC for an attack on the US Treasury. They were also used to transport sensitive spy equipment for reassigned undercover Crimson Guardsmen. Cobra Commander maintains a mobile office in an Arbco Moving truck. And there's Arbco Bros. Circus, which was also a cover to transport HISS tanks and FANG copters around the country.

Carbo Plumbing is a team of surveillance tele-vipers that eavesdrop on a military inquest from a plumbing van outside the Pentagon.

Robca Realty is an actual business that feeds Cobra's economy.

Orbac was a moving company that smuggled Cobra troops that moved into the Safeco Field Stadium in Seattle using trucks with this name on their side, and Zartan used an Orbac truck as a mobile HQ once.

Extensive Enterprises is a global company based out of the twin Enterprise Towers in Enterprise City existing primarily to serve Cobra's administrative needs with Tomax, Xamot, and an army of Crimson Guardsmen as the corporation's upkeep. It is a massive, but legitimate company that is the main building force of Cobra's economy.

MARS or the Military Armaments Research Systems/Syndicate is a legitimate weapons manufacturing firm headquartered in Callender, Scotland, which is run by James McCullen Destro XXIV.

The Sunbow cartoon did not explore how Cobra began. It was only in G.I. Joe: The Movie that it is revealed that the organization was a front runner for a 40,000 year-old underground civilization called Cobra-La, whose snake-like inhabitants were driven underground by the advent of humankind. Cobra Commander was, in actuality, a member of this underground race. He was tasked with creating an organization that would overrun the world at large. This revelation, though, contradicts what was established in the first season of the series. Also revealed is that the creation of Serpentor was an initiative by Cobra-La; through the use of a biological mind-controlling device, they implanted the idea into Dr. Mindbender's mind as an act of discipline against Cobra Commander.

The creation of Cobra-La was an unintentional side effect of Hasbro's demand that the heretofore unintroduced Cobra Emperor Serpentor be inserted into the series, despite the fact that Cobra Commander had long been established as the one-and-only head of Cobra. Series story editor and writer Buzz Dixon offered two possible storylines to make it work: One had the senior Cobra leadership, fed up with Cobra Commander's constant failures, deciding to literally build a better leader. The other presented Cobra as being a front for a vast, secretive, and far more sinister organization whose leadership finds Cobra Commander lacking and sends Serpentor as a replacement. Hasbro, liking both ideas, had the series writers combine both concepts.

The writers despised the name "Cobra-La" and had only originally intended to use it as a working name to be replaced by a "real" name in the finished product, but were overruled by Hasbro. Buzz Dixon originally had a much different idea for the origin of Cobra. In a story entitled "The Most Dangerous Man in the World", it was to be revealed that Cobra was originally organized around the political theories of a Karl Marx/Friedrich Nietzsche-type figure, whom Cobra Commander locked away when the Commander began corrupting the Cobra philosophies away from its original principles. A first-season two-part episode "Worlds Without End", portrays an alternate-reality in which Cobra has established control over the United States (and apparently all of the world). Although Cobra's reign is totalitarian, it does not use its power to promote any ideology beyond glorifying its leadership, and there is no sign of Cobra-La or other inhuman backing.

None of the senior Cobra leaders, except Destro and the Baroness, likes the others. During the encounter with the Gamesmaster, for example, Zartan accuses Destro of kidnapping Cobra Commander; Destro refuses to bargain for Zartan's release by G. I. Joe, and regards Cobra Commander with contempt; the Baroness disbelieves Cobra Commander's promise that he will send help after escaping via helicopter, and prefers G. I. Joe member Lady Jaye to use the vehicle; and Cobra Commander only trusts himself. Even after Cobra's complete victory in "Worlds Without End" distrustful rivalry between Cobra Commander and Destro persists, bringing the regime to the brink of civil war.

In the pilot episode of Sgt. Savage and his Screaming Eagles, General Blitz states that he helped create Cobra, during a teleconference between Blitz and Cobra Commander.

In the animated show G.I. Joe: Sigma 6 several of the prominent members, such as Cobra Commander, Destro, the Baroness and Zartan are featured prominently in the series. Many of these members are given some form of cybernetic enhancements. The Sigma 6 version of Cobra maintains B.A.Ts as the primary bulk of their army with human personnel acting mostly as technicians.

In the animated series G.I. Joe: Renegades, Cobra is presented as Cobra Industries, a company involved in communications, pharmaceuticals, and military technologies. The government has long suspected them of criminal activity, but has no evidence. The Joes, here framed as criminals for their attempt to discover the truth, attempt to find evidence of Cobra's plans of world domination. Cobra Commander, Baroness, Destro, Doctor Mindbender, Major Bludd, Storm Shadow, Zartan, and Firefly all appeared in the show.

In Rise of Cobra, Cobra was led by Rex Leiws and James McCullen who brainwashed people including Rex's sister Ana who become Baroness, but she fought back after she realized her love for Duke overcome her darker side by joining the Joes as defector. In Retaliation, Storm Shadow defected to the Joes after learning his former master Zartan framed him for avunculicide. 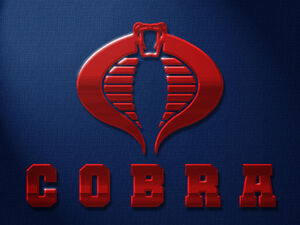 Unused concept art of the COBRA-Decepticon Allegiance symbol in the G.I. Joe/Transformers crossovers