Commission for the Preservation of the New Order

Ensure the preservation of Imperial ideals.

Totalitarian Propagandists
The Commission for the Preservation of the New Order (aka COMPNOR) was a government agency of the Galactic Empire that was dedicated to spreading Imperial propaganda throughout the galaxy.

It starting out originally as the Commission for the Protection of the Republic (aka COMPOR) during the last years of the Galactic Republic. Following Emperor Palpatine's declaration of a new Empire, the organization became known as COMPNOR.

During the next two decades, COMPNOR used propaganda techniques to ensure broad patriotic support for the Empire and its leaders. COMPNOR supported the xenophobic and human supremacist attitudes of the Empire, using its propaganda against aliens - denigrating them as "foreign" and "strange" animals.

Within COMPNOR there were a number of sub groups designed to ensure that Imperial ideals were reinforced throughout the galaxy. The Sub-Adult Group in COMPNOR was a youth group dedicated to ensuring that children learned and espoused Imperial ideals.

By 14 BBY, Armand Isard was the director of COMPNOR. The agency's headquarters was at the COMPNOR arcology on Coruscant.

After the Battle of Endor, the remnants of COMPNOR were reformed in to the Office of Imperial Promotion, Galactic Truth, and Fact Correction (aka OIP). They focused on propaganda to counter news of the Rebellion's victory at Endor.

In the Legends continuity, COMPNOR was founded as COMPOR with assistance from Ishin-Il-Raz. After the Empire was formed, Grand Admiral Il-Raz assumed a leadership role in COMPNOR.

After the Battle of Endor, COMPNOR supported Trioculus's claim to the Imperial Throne after Trioculus received an endorsement from the Supreme Prophet Kadann. The group later became one of the factions fighting other Imperial leaders, and by 12 ABY had ceased to exist. 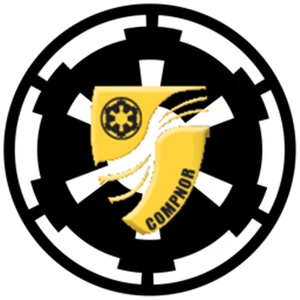