Try to prevent the world from becoming a horrible place like it was in the future.

Kill Russell in order to stop him from killing his own family in the future.
Kill Deadpool and Domino to prevent them from interfering with his goal (both abandoned).
Help Deadpool and Domino redeem Russell in order to prevent him from killing the Headmaster (succeeded).
Protect his wife and daughter (succeeded; but at a great cost).
Stay in Deadpool's timeline to make the future better (ongoing).

Nathan Summers, better known as Cable, is the deuteragonist of the 2018 superhero film Deadpool 2, the eleventh installment of the X-Men film series.

He is a cybernetic mutant who seeks to kill Russell Collins before he grows up to kill his family. He is considered as the complete opposite of Deadpool in every way.

He was portrayed by Josh Brolin, who also played Derek Bates in Into the Blue, Dr. William Block in Planet Terror, Tom Chaney in True Grit and Thanos in the Marvel Cinematic Universe.

Cable is a ruthless and merciless person, who will stop at nothing to achieve his goals. However, he has shown a more sympathetic side; he deeply loves and cares for his family, and the trauma he suffers after their deaths pushes him to his extremist and unrelenting desire for the greater good to assassinate a young Russell to prevent him from killing them and creating a post-apocalyptic future as an adult. His determination in this pursuit is so great that he more or less does not care about anything in his way, murdering and assaulting dozens of people (innocent or not) if they get in his way, such as the Icebox guards and prisoners, and the Essex House staff. He can even be needlessly sadistic in his work, taking pleasure in hurting Deadpool and stealing his skee-ball token as a trophy, or even mocking him of having any heroic capability. Even with how skilled he is, he acknowledges when he is out matched, and is willing to team up with his enemies if he can't overcome particular obstacles, like Juggernaut.

For the most part, Cable is a soldier: steady, disciplined, and focused on his mission. However, despite his very serious demeanor, he does possess a sense of humor as shown with his back and forth with Deadpool. After watching his enemy-turned-ally sacrifice himself to save Cable's timeline, Cable was deeply motivated by Wade's action and rather than return to his timeline (which is now fixed thanks to Deadpool due to Russell seeing a mutant die to save him), Cable instead opts to use the final charge on his time travel device to save Wade instead, saving both Wade and his timeline, including redeeming Russell.

In his time, Cable was a soldier who spent his life fighting in an apocalyptic war and hunting mutant criminals. One of these criminals was Russell Collins, aka Firefist, whom Cable had tried to stop numerous times. After these encounters, Firefist decided to get revenge on Cable by killing his wife and daughter, which he succeeded in. Devastated by the loss of his family, Cable decided to go back in time and assassinate Collins before he could grow up.

Transporting himself back to 2018, Cable asks two yokels what year it is, before knocking them out and stealing their truck. Breaking into a gun shop to construct a new gun, Cable then drives to the "Icebox", a heavily secure prison for mutants, where he tracks the imprisoned Russell Collins. After blowing a hole in the prison, Cable breaks in and tries to kill Russell, all while murdering his way through the corrupt guards. Cable's attempts to kill Russell are repeatedly intercepted by Wade Wilson, who ends up stealing his gun after their fright breaks the collar restricting his powers. Holding Cable at gunpoint, Wade asks who he is and why he is trying to kill Russell, and he explains that he is from the future. Cable then regains his weapon and continues fighting with Wade, and steals the skee-ball token he had been carrying as a memoir of his deceased fiancee, Vanessa, as a trophy. During another clash, Cable asks Wade why he is protecting Russell, and Wade claims that he "doesn't give a f*ck about him", which distresses Russell. After this, Wade attempts to blow up Cable with his own grenade not before the latter uses his own, which sends the both of them out of the Icebox and off of a cliff.

Cable survives this and retreats to his apartment, where he experiences a painful flashback to how things were before Firefist killed his family. Because of his defeat and Vanessa's vague guidance, Deadpool decides to form a team of mutants to protect Russell and extract him while the mutant prisoners are being transported. He assembles a team called X-Force, composed of Domino, Bedlam, Shatterstar, Zeitgeist, Vanisher, and a man named Peter, and prepares them to rescue Russell while he and the other prisoners are being transported, although this takes a turn for the worst when all except Domino and Deadpool are ultimately killed (save for Bedlam, who is critically injured) before they even reach the transport. Meanwhile, Cable kidnaps Deadpool's friend Weasel, who reveals everything he wants to know upon being threatened with torture.

Scouting the convoy from a building, Cable then leaps down to attack Domino as she is hijacking the transport, who manages to hold her own using her luck manipulation. As Deadpool approaches the transport, Cable starts throwing inmates out of the truck to slow him down. Deadpool still manages to enter the truck regardless and gets in another fight with Cable; during the fight, Cable ends up shooting Black Tom Cassidy in the head and killing him, which enrages Deadpool. However, the fight is ultimately brought to an end when Juggernaut smashes through the convoy and into the bridge, destroying it, before escaping with Russell to kill his abusive Headmaster. Cable is seen awakening from the wreckage afterwards.

Not long after this, Cable arrives Blind Al's apartment, where he is confronted by Deadpool (who is still recovering from being ripped in half by Juggernaut), Domino, Weasel, Al, and Dopinder. However, Cable doesn't put up a fight and instead announces that he's come to make a deal. He explains that he needs X-Force's help in order to get past Juggernaut so he can get to Russell, revealing that, if the latter ends up killing the Headmaster, he will develop a fondness for killing people and eventually kill his wife and daughter Hope in the future. Cable further states (in response to Deadpool asking why he didn't just travel further back in time to kill Collins when he was a baby) that he can only travel so far with his time travel device, which only has enough charge to get him to the present and back. Deadpool suggests that, instead of killing Russell, they prevent him from murdering the Headmaster instead, and Cable reluctantly agrees to give Wade thirty seconds to talk Russell down. With the deal made, Cable, Domino, and Deadpool are driven to the X-Mansion, where the latter tries and fails to recruit Colossus, and then to the Essex House for Mutant Rehabilitation.

Along the way, Cable taunts Deadpool about how he ends up dying and amounting to nothing in the future, which Deadpool dismisses. He, Deadpool, and Domino then arrive at the Essex House and face Juggernaut, who proves to be more than a match for them. Just as X-Force's effort was dwindling, Colossus, and later Negasonic Teenage Warhead and her girlfriend Yukio, soon arrive and battles Juggernaut so that the other three can stop Russell. Cable and Deadpool soon murder their way through a group of the Essex House's corrupt staff while Domino saves the mutant children from another. Upon encountering Russell, Deadpool is given his chance to talk him down, but he begins to fail, and Cable becomes more convinced that killing Russell is the only way to stop him.

Deadpool soon dons one of the Icebox's power-inhibiting collars in a final attempt to talk Russell down, offering himself in the Headmaster's place, and when Russell continues to act hostile, Cable decides to grab the gun across from them and use its last bullet to kill Russell. However, Deadpool jumps in the way and takes the bullet instead, and, with the virtually irremovable collar restricting his healing factor, he begins to die. Remorseful and grateful of Deadpool's sacrifice to save him, Russell loses his desire for revenge, which causes the burns on Hope Summers' teddy bear to fade away, showing Cable and everyone else that Russell will not become evil in the future, and history has therefore been altered. Deadpool tells Cable to return to and take care of his family, and, after a long winded death scene, he finally passes on and meets with Vanessa again in the afterlife.

Unknown to everyone, Cable, feeling remorseful for his actions and now knowing Deadpool is truly a hero, uses the last charge on his time travel device to go back in time and alter the future once more. This time around, Cable sticks Vanessa's skee-ball token onto Deadpool when they arrive at the Reeducation Center, which ends up blocking the bullet intended for Russell, saving him. Deadpool (through either his fourth wall breaking powers or simple deduction) realizes that Cable had gone back in time to save him, but sacrificed his one way home in the process. Cable doesn't truly mind, however, claiming that he's going to stick around to make the future even better for his family. The group begins to walk away when the Headmaster comes out of hiding and begins yelling fanatical anti-mutant remarks. Enraged by the Headmaster's words and indirect responsibility for his family's death, Cable pulls out his knife and attempts to kill him, but Deadpool stops him, claiming that karma will take care of things, which comes in the form of the Headmaster being run over by Dopinder's taxi.

Later, in the mid-credits scene, Deadpool gets Negasonic Teenage Warhead and Yukio to fix Cable's time travel device so he can use it, an action they both immediately regret doing. Deadpool then uses time travel to save Vanessa and Peter, kill X-Men Origins: Wolverine's inaccurate version of Deadpool, and assassinate a young Ryan Reynolds after he approves the script of the 2011 Green Lantern film. Finally, according to a deleted scene, Deadpool travels back further to kill Adolf Hitler as a newborn infant, but cannot bring himself to do so. Instead, Deadpool tells the future dictator that he will come back with Cable, claiming that the latter "loves killing kids." While it was never shown on-screen, it can be assumed that Deadpool and Cable killed Hitler. 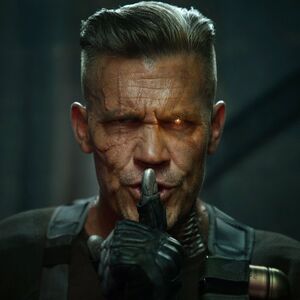 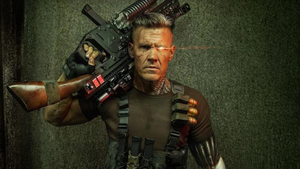 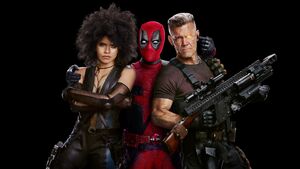 Cable with Deadpool and Domino. 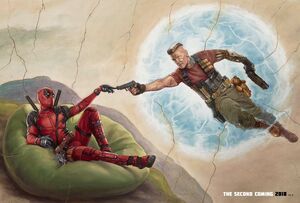 A promotional image of Deadpool and Cable.