Have Steven Kovacs as his own best friend forever.

Torment, antagonize, and manipulate Steven for rejecting their friendship (all failed).
Kidnap Robin in order to manipulate Steven.
Break and defeat Robin's date so Steven will replace him.
Have Steven been accused for stealing electric products which he himself stole (all succeeded).

He was portrayed by Jim Carrey, who also played the title character in The Mask, The Riddler in Batman Forever, The Grinch in Dr. Seuss' How The Grinch Stole Christmas, Count Olaf in Lemony Snicket's A Series of Unfortunate Events, Ebenezer Scrooge in Disney's A Christmas Carol, Steve Gray in The Incredible Burt Wonderstone and Dr. Robotnik in Sonic the Hedgehog. He was also portrayed by Cameron Starman as a child.

Chip Douglas (or rather the Cable Guy) was nothing more or less than just an obsessed and delusional individual.

Despite Steven wrongly calling him a "sociopath", the Cable Guy actually has Borderline Personality Disorder. This is a mental disorder characterized by unstable moods, self-image and relationships. He has such a severe case of the behavioral illness that he exhibits behaviors that meet virtually all nine of the major diagnostic criteria symptoms for BPD, when you only need five for a diagnosis. These symptoms include: fear of abandonment, intense and unstable relationships with alternation between love and hate, unstable self-image or sense of self, impulsive behaviors, self-harm or suicidal behaviors, mood swings, chronic feelings of emptiness, inappropriate, intense anger and transient, stress-related paranoid thoughts or severe dissociative symptoms. Because of him meeting virtually every criteria for the disorder, The Cable Guy could be considered a poster child for the illness. This is a very common disorder (with over 3 million U.S. cases alone annually, affecting 1-2% of the adult population) and is often caused by an unstable childhood. This is actually foreshadowed by a scene where, as a child, he watches "Play Misty For Me" on television, a film about an obsessed stalker, herself suffering with Borderline Personality Disorder. He also developed a sociopathic nature, and a severe obsession to gain friends and to torment them.

He is much like Alex Forrest from Fatal Attraction; he was a really obsessive, psychotic and stupidly delusional individual who just always sought to have Steven as his best friend forever much like that Alex wanted Dan to be her boyfriend forever.

Yet, he wasn't pure evil because of the reason for which he'd always sought a friend, even if he wishes to torment this specific friend forever.

His real name is never actually revealed, not even in the credits. He was known under various aliases from tv sitcoms, his most used one was Ernie 'Chip' Douglas which were the children's names from My Three Sons, other names included Larry Tate (Bewitched), The Big Ragoo also known as Carmine (Laverne and Shirley) and Murray Slaughter (the Mary Tyler Moore show), George Jetson (The Jetsons) and Jean-Luc Picard (Star Trek). The Cable Guy claimed that his real name was "Ricky Ricardo" but this is undoubtedly another television reference because he does the Ricky Ricardo laugh and says "Babalú" from I Love Lucy after this.

The Cable Guy was raised in a neglectful home by his mother who worked nights and told him to stay near "Mr. Babysitter" which was what she called the television, which is effectively what raised him. He never met his father. Later in his life he became a cable installer for an unknown cable company. The company fired him for stalking customers, but he remained undeterred and still used his profession and his knowledge as a cable guy to make friends. Also at some point of his life he developed a lisp speech impediment.

Meeting Steven and Tormenting Him

Chip first met Steven Kovacs (the movie's protagonist) when he first installed his cable in his new apartment. Steven tried to bribe him with 50 dollars to get all the channels for free and he refuses the money, but accepted with the condition that they should be hang out as friends. He started off as a seemingly nice and enthusiastic guy, he first took Steven to the large Satellite dish where the company sends shows to peoples' televisions and then took him to his favorite restaurant where they had a realistic medieval duel.

However he soon became a bit of a stalker by spoiling a basketball game that Steven was having with his friends and leaving him one phone message too many on his answering machine.

Chip tried to make up for it by giving Steven a large home system of a deluxe karaoke machine, CD player and a big screen television set. They then had a karaoke jam in Steven's apartment with Steven giving Chip a gift of a book to help lose his lisp, but Chip crossed the line when he allowed Steven to be with a prostitute named Heather making Steven angry because he already had a girlfriend named Robin and ended their friendship.

Chip decides to make it up to him again by beating up Robin's new boyfriend and installing free cable for her. Steven appreciates what he has done, but tells him gently that he doesn't want to be his friend.

Hurt by these words, Chip then sets out to ruin Steven's life with vengeful acts, firstly by phoning the police saying that Steven was in possession of stolen goods which was the large home system which places Steven in jail, then he is invited by Robin to a visit at Steven's parents' house where he drives him mad and uses blackmail by showing Steven a photo that he took of him and Heather that he would show to Robin if anything happened. Eventually, he pushes Steven too far when he plays a sexualized game of "Password" with the family and then whispers disturbing things to him about Robin resulting in him being punched in the face. He then leaves.

He later sent a video recording of Steven insulting his boss to every computer in the place where Steven worked resulting in Steven almost being fired and haunting him by setting off all the car alarms at once. He also appears in Steven's nightmare as a menacing figure with green eyes who is a psychopathic stalker.

He finally performs his final act of cruelty by kidnapping Robin and taking her to the same place he showed Steven many days before. When the film reaches its climax he admits that he didn't really have a plan as such and he was just going from moment to moment. He apologizes to Steven, he claims that he only wanted to be his friend but he screwed it up and that he never intended to go to such great lengths. When the police arrive Chip gets entranced by the police helicopter searchlight, he makes a speech about how his mother was never there for him and how he was practically raised by the TV, he even goes as far as to claim that he learned the facts of life from watching The Facts of Life.

Chip tries commiting suicide by throwing himself off the platform that he, Steven and Robin are on by reasoning with Steven despite Steven's promises that he would be his pal if he climbed back up that somebody has to kill the babysitter (a reference to what his mum called the TV when she worked nights). He survives the fall but destroys the dish receiver, which gives everyone a blackout screen and freedom from the TV. He makes up with Steven and Robin, before the paramedics take him away. Just before he is placed into the helicopter and flown away, Steven asks what his real name was, to which he jokingly replied "Ricardo, Ricky Ricardo" (I Love Lucy reference). A paramedic tells him he'll be alright as they fly to the hospital and he addresses him as 'buddy'. Chip asks him if he's really his buddy. He says "Yeah, sure you are". Chip gives him a happy but dark smile, implying that the paramedic is going to be the next victim. 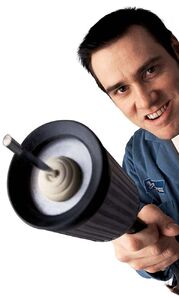 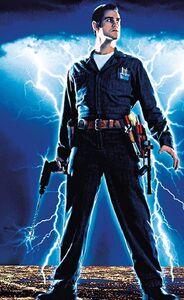 Chip as a child.

Chip having a joke with Steven. 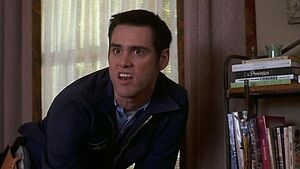 Chip playing Basketball with Steven and his friends.

Chip and Steven having a Medieval duel

Chip having a Karaoke Jam.

Chip mocking Steven in prison after getting him arrested. 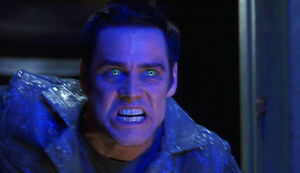 "I just wanna hang out. No big deal!"

Chip apologizing to Steven
"I just wanted to be your friend, but I screwed it up!"

Chip trying to commit suicide by falling onto the satellite dish.

Chip surviving, but injuring his back.

Chip taken to hospital.
Add a photo to this gallery

Retrieved from "https://villains.fandom.com/wiki/Cable_Guy?oldid=4285773"
Community content is available under CC-BY-SA unless otherwise noted.