Speed and agility
Knowledge in spells and potions

Helping Merolick in his plans and collect missing ingredients

Prevent the Alebrijes and Teodora thwarting their master's plans (failed).

Have an accomplice Teodora and use the Calaveritas as a recipe for pocima (failed).

Cacomixtle is a supporting antagonist in the Mexican cartoon movie La Leyenda del Chupacabras from 2016, coming to be a magical talking animal that assists Merolick, his master and owner to complete their rituals.

Teodora arrives at a ghost town looking for a store, in that she enters a warehouse where she is trapped in a prison of light by a strange evil cacomixtle with bright eyes. Next to her, there is also a girl named Juanita who was also caught.

Evaristo together with Finado and Moribunda meet Teodora, who, controlled by the lenses, catches them and takes them with the cacomixtle. After taking them to the animal, Teodora leaves in search of Alebrije, finds it and catches it in a nopalera, although this manages to break the spell of the lenses with a song and rescues Teodora.

Teodora and Alebrije make a plan to rescue Evaristo and Juanita, pretending that the glasses still have an effect and taking Alebrije as their prisoner. Juanita pointing to a sign tells Teodora that the man who is in it, called Merolick, is the one who has the chupacabras trapped, and Teodora realizes that this man is the one with Leo, the gypsy.

When he is about to tell him, he is turned into a doll by the cacomixtle, who works for Merolick and is willing to turn everyone into trophies as well, although he is stopped by Finado and Moribunda who manage to catch him. The group manages to free itself and Teodora returns to its normal form. 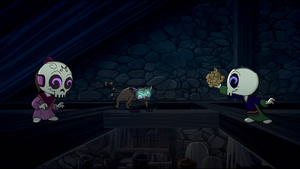 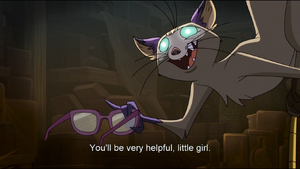 Cacomixtle about to put enchanted glasses to Teodora. 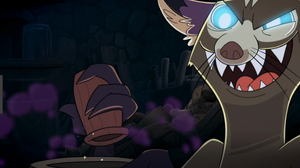 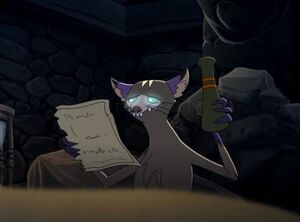 Retrieved from "https://villains.fandom.com/wiki/Cacomixtle?oldid=2740357"
Community content is available under CC-BY-SA unless otherwise noted.