Accurate shooting
Resistance to the Force

Getting paid for completing his tasks that he is hired to do.

Help the Separatists against the Republic in order to get paid. (occasionally)

Steal a Jedi holocron from the Jedi Temple for his employer.
Break Moralo Eval out of the prison on Coruscant and help Dooku with kidnapping Chancellor Palpatine. (succeeded; failed later on)

Cad Bane is a major antagonist in Star Wars: The Clone Wars. He was a male Duros, born on the planet of Duro, who rose to be a bounty hunter during the Clone Wars. Ruthless and deadly, Bane worked for the highest bidder, and earned the reputation as the galaxy's best and most fearsome mercenary — a title that he was able to claim after fellow bounty hunter Jango Fett perished in the opening battle of the war.

Bane was hired to break the Republic captive Ziro Desilijic Tiure out of prison on the galactic capital of Coruscant. The Duros assembled a team of hunters and captured members of the Galactic Senate in their headquarters on Coruscant, forcing Supreme Chancellor Palpatine to free Ziro the Hutt.

Cad Bane is a textbook example of a psychopath: He is ruthless, greedy, brutal, evil, cold and cruel he kills without remorse and takes sadistic pleasure in his victims' suffering. He will happily dispose of innocent bystanders and even his own allies to finish off his quarry. Bane is also very wrathful and manipulative willing to do use any means necessary to get someone to do whatever he wants such as shocking Jedi Master Bolla Repal at full power to get him to open the holocron.

There is no task too harsh or sickening for Cad Bane to sink to doing, even abducting Force-sensitive children and giving them to Darth Sidious, who would have both physically and psychologically tortured them into being as heartless as himself as apprentices.

While he controls his own emotions, he can sometimes break out into evil laughter, and have a few hammy moments, but generally, Cad Bane is as funny as a heart attack. He also exhibits vanity, killing just to get a replacement hat.

During the Clone Wars, Bane was hired by Jabba the Hutt to break Ziro the Hutt out of prison as he contained dangerous information to the Hutt council. After tracing Ziro's location, Bane took fellow bounty hunters Shahan Alama and Robonino to raid the Galactic Senate on Coruscant, planning to take senators hostage in order to force Supreme Chancellor Palpatine to release Ziro the Hutt. After Bane, Alama, a sentinel droid, and two droid commandos landed at the Senate Building in an airspeeder, a squad of Senate Commandos—a branch of the guards of the Senate—confronted the approaching Bane. The Duros commented on their hastiness, and before the guards could arrest Bane, one bounty hunter used a sniper rifle to kill most of the guards from a long-range post. Bane personally eliminated the captain of the guards by tackling him and snapping his neck.

The Duros signaled to Robonino, and the other hunters that the coast was clear, and the bounty hunters arrived at the building with several more sentinel droids. Leaving the droid commandos outside to clear the platform and stand guard, the team entered the headquarters of the Senate. After eliminating the Senate Commando posted at the building's power control room, as well as several droids inside, Bane left Robonino to shut off the power before heading for the atrium with the rest of his team. Along the way, the Duros eliminated two patrols of guards by tossing a primed thermal detonator into their barracks when both shifts were assembled there.

Entering the Republic Executive Building, Bane caught the attention of the senators discussing a piece of Senate legislation by firing several blaster shots. The bounty hunters surrounded the senators, and when Senator Philo objected to being taken hostage—walking away while refusing to "listen to insolence"—Bane shot him in the back. The Duros ordered the senators to turn over their communication devices, and contacted Chancellor Palpatine in his office via a holotransmission. Bane stated that the hostages were to be freed if Ziro the Hutt were to be released from prison.

After Palpatine objected, Robonino shut off the power, trapping Palpatine and Senator Orn Free Taa in the office and sealing all external communications. As the bounty hunters collected the senators' transmission devices, Bane came across Senator Padmé Amidala. While speaking with her, Bane noticed Amidala glance at something behind him, and the bounty hunter turned around and recognized Jedi Knight Anakin Skywalker surveying them from an upper level window. Bane fired at the man, and Skywalker fled, prompting the bounty hunter to order Alama and an IG-86 sentinel droid after the Jedi.

Alama returned without the droid, and reported that while it had been destroyed by Skywalker, an examination of the droid's remains showed that the Jedi Knight did not have his lightsaber. Bane dispatched Aurra Sing with Alama to find and bring the Jedi back to him. The Duros contacted Palpatine once more and told the Chancellor to make a pardon disc and give it to Senator Taa, who would be picked up by Bane's airspeeder and taken to deliver the disc to the prison. Taa reluctantly obeyed, and the sentinel droid 3D took the senator to the Detention Center.

Sing and Alama returned with Robonino and an unconscious, handcuffed Skywalker, and the Duros taunted the knocked-out Jedi Knight before ordering him to be tossed in with the rest of the hostages. Meanwhile, 3D collected the Hutt and returned to the Senate Building, while Taa stayed at the prison in the safety of the Coruscant Guard's clone troopers. Preparing to leave, Bane ordered the rest of his team to set up their "parting gifts" around the senators—a laser web that would activate explosives upon the slightest touch. Wishing the senators and Jedi a "most respectful farewell," Bane left the building with his comrades.

Upon the team's arrival outside on the landing platform, two LAAT/i gunships landed, and clone troopers of the Coruscant Guard piled out and cornered the group of bounty hunters. Palpatine contacted Bane and ordered him to surrender, but the Duros informed the Chancellor of the trapped senators, and Palpatine reluctantly relinquished his attempts to apprehend the bounty hunter. Bane's airspeeder arrived, driven by 3D and hauling Ziro in a rear transport, and with the lives of the senators still at risk, the Coruscant Guard allowed the team of mercenaries to escape. After they were a safe distance away, Bane remotely activated the explosives as payback for the indignities Ziro had suffered in prison. Skywalker, in the meantime, had recovered, and began to cut a hole in the floor around himself and the senators. Just as the explosives went off, the Jedi and the senators dropped into the room below. As Ziro congratulated Bane on a "job well done," Bane demanded his pay from the Hutt, as he did not work for free.

After freeing Ziro, Bane ordered his comrades to go into hiding, but all were captured except Shahan Alama, who was killed during a crash on Florrum and Cad Bane himself. Later, Bane and his droid Todo 360 hunted for Ziro, who had escaped from the Hutts with help from his girlfriend Sy Snootles, unaware that two jedi, Obi-Wan Kenobi and Quinlan Vos had also been hunting for Ziro. But by the time both groups reached Teth, where Ziro's father was buried, Ziro had already been murdered by Snootles, who was used by Jabba to collect a holodiary exposing the Hutt crime families' crimes. Cad Bane stole Vos's lightsaber and fought Kenobi. Bane defeated Kenobi, but was rescued by Vos while Bane escaped with Todo 360.

Later, Bane was hired by Darth Sidious to steal a Jedi holocron which contained all the names of future Jedi children. As part of his plan, Bane murdered the Jedi Ord Enisence and enlisted the help of fellow bounty hunter Cato Parasitti, who would use her shape-shifting abilities to pose as Enisence to infiltrate the Jedi Temple on Coruscant and his droid Todo 360.

After that, Parasitti, in the form of Enisence, infiltrated the Jedi Temple and hacked into the computer systems to aid Bane and Todo as they traversed through the ventilation shaft. Parasitti also used a comlink to keep in touch with Bane and taught him how to bypass the laser tripwire security systems. After Bane and Todo reached the holocron chamber, Bane easily stole the holocron while Todo deactivated the remaining security lasers.

Bane ordered Todo to make his way to the Jedi communication center to divert the Jedi's attention, but he hid the reason for the order, which, unknown to Todo, had an explosive attached to him. Meanwhile, Bane lost contact with Parasitti, who was defeated and captured by Anakin's Padawan, Ahsoka Tano. Bane quickly took the holocron and escaped, leaving Parasitti to be imprisoned and Todo being destroyed by the explosive attached to him. 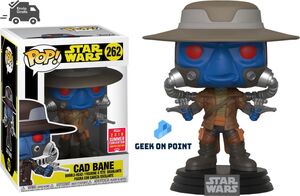 Cad Bane's Funko Pop!
Add a photo to this gallery 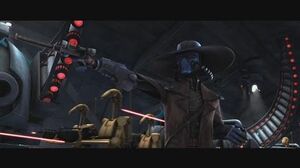 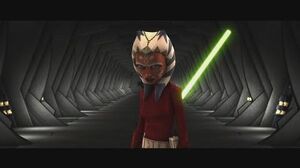 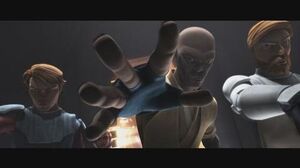 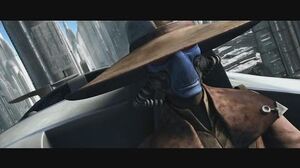 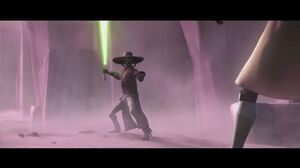 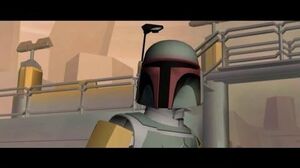 Retrieved from "https://villains.fandom.com/wiki/Cad_Bane?oldid=3506972"
Community content is available under CC-BY-SA unless otherwise noted.