Keep Dusty and his friends inside the hotel without letting them get out.

Get more and more money and keep everyone happy to boost his ego (both failed).

Caddie "Cad" Spinner is the main antagonist of the 2014 Disney animated film Planes: Fire & Rescue, the sequel to the 2013 film Planes and a spinoff to the Cars franchise. He is a malicious and self-absorbed hotel owner.

He was voiced by John Michael Higgins, who also played Drex in Super Buddies and Varrick in The Legend of Korra.

In Planes: Fire & Rescue, Cad first appears checking on the people going into the Grand Fusel Lodge while Dusty Crophopper flies over it.

Later, he comes to the firefighters' base to tell Blade Ranger that one of his staff members had soaked fire retardant on two campers and their campfire, which Dusty, who was responsible for it as he didn't know, apologizes, but Blade tells Cad that the team needs to train. However, Cad gets excited as soon as he sees Dusty, mistaking him for Ripslinger at first, and tells him that he is invited to the grand reopening party at his lodge the next day, along with that the Secretary of the Interior would come. He explains to Blade that a big party at his lodge would make for happy campers rather than spilling mud on people, but Blade tells him that he packs too many happy campers in the park and lodge. Cad tells him that he has Pulaski, a structural fire engine, to protect the lodge, to which Blade responds that it is not just all about protecting the lodge. As Blade continues talking, Lil' Dipper whispers to Dusty that Cad got the park service to save 80% of their budget for his lodge restoration project. As he leaves, he insults Blade by telling him that "Dusty Cropslinger's even more famous than you, Blazin' Blade!"

At the party, he greets the Secretary, who later asks how the park's wildlife population is. Cad replies that there will be plenty of party animals if people come to the party, and later states Ol' Jammer as a "bumper kisser." Later, he tells Dusty that he might get a promotion, but in the middle of the talk, he goes to talk to another famous guy named Boat Reynolds (a spoof of Burt Reynolds).

The next day, while the firefighters are fighting a large forest fire which was caused when Cad's visiting VIPs flew too low and made air eddies that blew embers about, Blade tells Maru, the firefighters' mechanic, to report to Cad that the fire is about four hours away from the lodge and that the tourists will need to evacuate. However, Cad refuses to get everyone out of the lodge, saying that he won't evacuate at that moment since being the superintendent for five years.

Outside, when Cad gives a speech to the tourists and the Secretary about the grand reopening of the lodge, the lodge's concierge, André, is talking to Pulaski about the fire coming towards the lodge. Cad overhears them, pauses his speech, and argues with Pulaski on giving the speech, and even says that they're both saying the same thing when Pulaski keeps correcting him upon mispronouncing his name. Pulaski explains to Cad that the fire is getting closer to the lodge. André suggests to Cad that they should turn on the roof sprinklers, and Pulaski and Jammer tell Cad that they need to evacuate. After the Secretary tells Cad to let them see the plaque, Pulaski and Jammer argue that the fire will get worse before Cad angrily insults them by saying that André is a glorified bellboy, Pulaski is an overpriced sprinkler, and Jammer is old and has a dumb hat, and says that he is the park superintendent and getting the moment of reopening his lodge, before coming back to the crowd, and revealing the lodge's sign before one of the tourists screams. Cad, at first, thinks that they are being rude until they mention the fire, which Cad then notices, and the tourists all drive away. As the guests sleeping inside the lodge exit, Cad tells them to calm down, saying that it is only a small fire and that they should come back the following year.

As the fire gets close to the lodge, Cad tries to get some water to the lodge's roof sprinklers to keep it from burning but finds that he is not getting enough water. He orders André to switch the main water supply to them, but André explains that the firefighters need it to make their fire retardant. However, Cad refuses to listen, stating that he doesn't care, and switches the water supply himself, while André leaves with his luggage.

Eventually, Cad gets fired by the Secretary for caring just about the lodge, putting Jammer in charge. In the end credits, it is shown that he now works as a park ranger in Death Valley, giving out a welcome to the audience before complaining about how hot it is. Just then, a background car's engine stalls and Cad gives off a nervous look before the screen cuts to black. 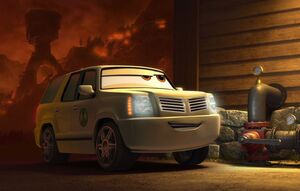 Cad redirecting all of the water pressure to save the Fusel Lodge, even though the firefighters need it to fight the fires.