Caellach (ケセルダ Cethelreda), also known as the Tiger Eye, is a secondary antagonist in Fire Emblem: The Sacred Stones. Originally a mercenary, Caellach quickly rose in status as a soldier of Grado's army. Such was his skill that Emperor Vigarde promoted Caellach to the rank of Imperial General alongside Valter and Riev. Caellach is voiced by Takaki Ōtomari in Japanese and Mike McFarland in English.

Caellach is a middle aged man with a lean, athletic physique and short, slicked-back red hair. He wears a form-fitting purple shirt and spiked paudrons on his shoulders. Caellach also wears gray pants and brown boots.

Caellach is a ruthless individual with a strong drive to become king. This ambition drives him to kill anyone who he believes is holding him back, including former allies. Caellach's desire for power is such that he destroyed two of Magvel's Sacred Stones without a second thought, despite such an action potentially dooming the world. However, Caellach is disgusted by fellow Imperial Generals Riev and Valter, as his crimes are rooted in pragmatic opportunism, while the latter two are much more depraved in their deeds.

Born in an unnamed village in Jehanna, Caellach grew up loathing his hometown and joined a mercenary band to escape it. Eventually this troop would also accept Joshua, Jehenna's crown prince who secretly abandoned his title to travel the world and learn how to best serve his people. Though the two often came to blows over Caellach's dreams of kinghood, they respected each other's martial prowess. While Joshua remained a mercenary, Caellach left the troop to enlist in Grado's army, where he rose through the ranks thanks to his skill and ruthlessness.

During the beginning of the War of the Stones, Caellach summoned to Grado Keep by Emperor Vigarde, along with his fellow soldiers Valter and Riev. Vigard introduced them to Glen, Selena, and Deussel, Grado's three highest ranking generals, before promoting them to a similar status. Now granted the title of Tiger Eye, Caellach was tasked with invading Frelia alongside Selena and destroying its Sacred Stone. Despite the Frelian army's best efforts, the two Imperial Generals stormed the Tower of Valni, Caellach shattering the Stone.

Much later during the war, Caellach led a squad of Grado soldiers to Taizel, where Ephraim of Renais recently docked. Caellach prepared to engage with Ephraim's forces, but Riev interrupted him with Vigarde's newest orders: He was to enter Jehanna, where Ephraim's sister Eirika was interfering with Grado's plans, and destroy it's Sacred Stone. Resentful of returning to his despised homeland, Caellach nevertheless complied. In Jehenna, Caellach met with Aias, a fellow member of his old mercenary band who followed him into Grado's army. Unnerved by Eirika's alleged killing of Cormag the Sunstone, Aias questioned his fighting ability. Caellach assured him that he was more than capable of defeating Eirika, and stated that their current life is much better than their mercenary days, before leaving to fight reinforcements from Rausten. However, Eirika's army decimated Aias', potentially slaying him in the process. If not, then Rausten's knights arrived to bring a decisive end to the battle. Forced to flee, Aias confronted Caellach in Jehenna Hall. As the Rausten forces arrived too early to have been delayed by a formidible warrior like Caellach, Aias concluded that he deliberately set him up to fall. Caellach simply stated that he needed to sever all ties to his past to realize his ambition of kinghood, and struck down his former comrade with no remorse.

Vigarde's son, Prince Lyon, later joined Caellach in his search for the Jehanna stone. With the help of Carlyle, who was both the right-hand man of madly in love with Jehenna's Queen Ismaire, the two successfully captured the monarch. Congratulating Carlyle for his betrayal, Caellach and Lyon double-crossed him in turn by denying him Ismaire's hand in marriage. Instead, the two demanded Ismaire hand over Jehenna's Sacred Stone. Annoyed with Ismaire's defiance, Caellach grievously attacked her and took the Stone by force, despite Lyon's protests. As Caellach shattered the Stone, he advised Lyon to deliver the finishing blow, but the prince refused. As a disappointed Caellach prepared to join forces with Valter, Lyon asked him if he ever had a friend. Caellach admitted that he considered Joshua one once, but while he somewhat missed those days, he reaffirmed his desire to make a name for himself in the Grado Empire. However, Caellach's ambitions came crashing down as his and Valter's armies clashed with Ephraim and Eirika's combined might. As a fatally wounded Caellach lay dying, he lamented his failure to achieve kingship.

Caellach was first made available to players on December 9, 2020 as the fiftieth Grand Hero Battle. His outfit is based on his design from The Sacred Stones. 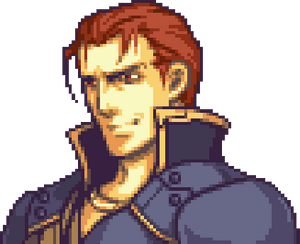 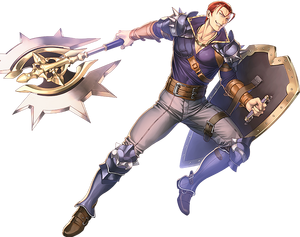 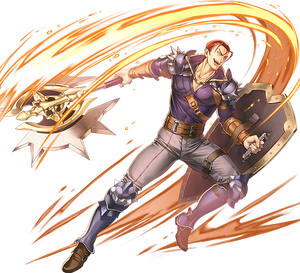 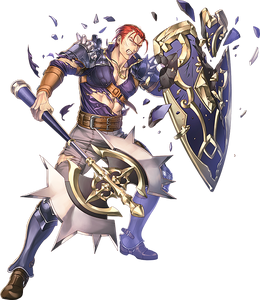 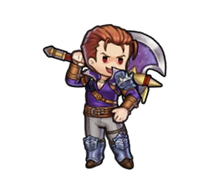 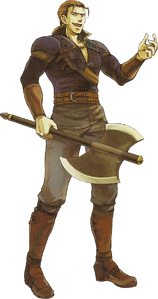 Official artwork of Caellach from Fire Emblem: The Sacred Stones.
Add a photo to this gallery

Retrieved from "https://villains.fandom.com/wiki/Caellach?oldid=4274126"
Community content is available under CC-BY-SA unless otherwise noted.