Conquer everything and bring it under their rule.

Caesar's Legion is a large imperialistic society built upon mass slavery. It serves as one of the main factions of Fallout: New Vegas, and is the main antagonistic faction unless the player decides to side with them.

The Legion is led by Edward Sallow, who crowned himself Caesar after reading about the real Julius Caesar of ancient Rome, and decided to recreate his dictatorship in post-apocalyptic America. Originally a member of the Followers of the Apocalypse, Sallow and several companions were taken captive by the Blackfoot tribe, but after managing to impress them with his extensive knowledge of warfare tactics and weapons maintenance, they quickly made him their leader. It was at this point that he adopted his new name.

He soon began teaching the Roman warfare tactics he had learned to the tribes he conquered, introducing them to the concept of total war and cultural annihilation. As part of this doctrine, the newly formed Legion to aimed to ruthlessly erase enemy tribes by forcefully absorbing them into their monolithic culture through warfare. When a new tribe was encountered, the Legion would always attack their weakest enemies first, before enslaving any able-bodied survivors. Caesar had the rest of them put to the sword if he could find no purpose for them, those who could not be used or subjugated had no place in his legion.

After bringing a new tribe into submission, it was standard practice to wipe out any remaining traces of the tribes' previous cultural identity, with it's members being forced to breed with members of other subjugated tribes. This was done in order to break any remaining bonds of old loyalties between the new recruits and fully assimilate them into the Legion once and for all. One by one, each tribe encountered was forcefully integrated under Caesar's banner whether they liked it or not, with anyone who resisted being mercilessly crushed.

Eventually after years of conquest, Caesar had created an empire of 86 tribes spanning throughout parts of Arizona, Utah, Colorado and New Mexico.

The Legion is a brutal and merciless organization, who enslave everyone they come across and kill anyone who resists. They frequently crucify their victims. They are unapologetically sexist, believing that women are inferior to men both physically and intellectually and treat them as little more than slaves. Although Men considered superior in the legion, they are still widely used as expendable pawns, fit only for military service primarily, with Caesar viewing them as mere tools with which to expand his legion.

The individual life holds little value in the legion, with a single persons life only having as much value as it can contribute to the collective as a whole, this brutal form of utilitarianism is drilled into every new recruit from early childhood, with entire units of men ready to slit their own throats without hesitation if ordered to by a superior officer. Recruit training begins at a young age with each new generation of boys being raised to kill without mercy in the name of the legion while they are at their most impressionable.

The legion disciplines its people through intense physical labor and torture, and forbid the use of medicine and painkillers, considering them a sign of weakness. Most advanced technology is also outlawed, though practical weapons such as firearms are still widely used by legionaries, it is worth noting that legion recruits are taught to rely on melee weapons, or even their own hands more than anything else however, due to the legions belief that many ranged weapons can fail when needed most. Although the legion is dismissive of many advanced technologies, they are still reasonably adept when it comes to craftsmanship, with them being able to construct formidable defenses such as the fortification hill as well as being able to smith impressive equipment such as Lanius's amour/mask.

In relations to outsiders, the legion views anyone outside their society as little more than animals, considering them to be dissolute barbarians who live in squalor. Part of their disgust towards these individuals stems from the legions deep routed utilitarian principles, from a legionary's point of view, an outsider is only concerned with their own survival and pleasure, which makes them selfish individuals who live only to satisfy their own base desires, rather than contribute to something higher than themselves. To the legion the concept of what it means to be a true human being is linked to qualities such as self sacrifice in the name of a greater civilization, the individualistic outsider is considered the ultimate corruption of the legions collectivist ideals and thus earns their hostility. Although the Legion has a low opinion of any outsider, none are more loathed than the 'profligates,' those who openly oppose the legion and it's expansion, such as the New California Republic. The legion considers these people to be the lowest of the low and is utterly merciless in their attitude towards them, seeking to wipe them out whenever possible.

When it comes to crime and punishment, the legion tends to favor brutal example killings and shock tactics, which serve as a warning to anyone else who might invoke their wrath. Common execution methods include:

Their more backhanded atrocities are carried out by a special group called the "Frumentarii", who act as Caesar's "Secret service" of sorts and are led by the diabolical Vulpes Inculta.

When the growing Legion encountered the New California Republic in the 2270's, it found a truly worthy opponent for the first time ever. At the first battle of Hoover Dam, Caesar's Legion suffered its first ever military defeat to the NCR, due to the poor leadership of Legate Joshua Graham, who as punishment was burned alive and thrown into the Grand Canyon. It is confirmed in the DLC Honest Hearts that he survived, after rumors of him living on as "The Burned Man" mentioned in the original game, and it is revealed that he became a Mormon and is currently fighting the White Legs with the peaceful tribals in Zion Valley.

During the events of the game, the Legion is currently preparing for a second assault on the NCR-controlled Hoover Dam, this time taking no prisoners and led by their new general Legate Lanius. You can choose to side with Caesar's Legion if you want, but in all other ending paths the Legion will be the main enemies in the climactic final battle at Hoover Dam, and Lanius is the final boss.

Praetorian Guard
Add a photo to this gallery

Joshua Graham- Co-founder of the legion and Caesars first legate, Once known as the 'Malpais legate,' now commonly refered to as the "burned man" 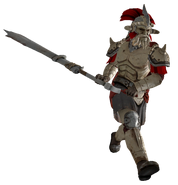 Legate lanius- "Monster of the east," second in command of the legion under Caesar
Add a photo to this gallery

Retrieved from "https://villains.fandom.com/wiki/Caesar%27s_Legion?oldid=3833523"
Community content is available under CC-BY-SA unless otherwise noted.