Kaiser
Son of Mars
The Lord
Baldy (by Benny)

Leader and founder of Caesar's Legion

Overthrow the NCR and rule the Mojave Wasteland (determinant).
Achieve conquest of all tribes across post-war America

Caesar (real name: Edward Sallow) is the charismatic, yet ruthless and cruel leader (and founder) of Caesar's Legion. A former citizen of the New California Republic, he is the main antagonist of Fallout: New Vegas unless the player sides with the Legion. His ultimate goal is to conquer the post-war United States and reform it into a military dictatorship akin to Ancient Rome.

He was voiced by John Doman, who also voiced Don Morello in Mafia: The City of Lost Heaven, portrayed Carmine Falcone in Gotham and Jonah Vogelbaum in The Boys.

The man who would become Caesar, the cruel and ruthless leader of Caesar's Legion, was born Edward Sallow in the year 2226 as a citizen of the NCR (The New California Republic). He and his family lived in the Boneyard, a collective of settlements built in remains of Los Angeles and named for its devastated skyscrapers, reduced to their metal "skeleton", and the numerous skeletons of the dead that littered the city after the Great War which ravaged most of the Fallout world.

At age two, raiders came and attacked Sallow's settlement. Sallow and his mother managed to escape, but his father was murdered by the savage raiders. They eventually found sanctuary with the Followers of the Apocalypse (a faction of humanitarians who tend to the inhabitants of the wasteland, as well as to ensure that the horrors of the Great War are never to be repeated). The Followers gave Edward a free education and he eventually became a scribe, specializing in anthropology and linguistics.

Despite his high intelligence and charisma, Sallow was narcissistic and petulant towards his peers and felt that he didn't belong with the Followers and, in hindsight, considered them and their goals to be weak and naive. He would later describe this position, as he quoted, as a f**king waste of time!

In the year 2246, at the age of twenty, Sallow was recruited for an expedition east to study tribal dialects. The group included Bill Calhoun, a fellow Follower and several others. They were to meet up with Joshua Graham, a Mormon missionary and tribal specialist from New Canaan, and nine others who would join them on their expedition. After days of travel, they finally arrived at their destination in the region formerly known as Arizona.

When they arrived, Caesar was disgusted by the primitive conditions of the tribesmen and viewed them as savage & inferior. While there, he discovered a cache of books about The Roman Empire. While he already knew some basic facts about ancient history, the books gave him a more complete view on the subject. Reading first The History of the Decline and Fall of the Roman Empire and then Julius Caesar's own Commentarii, and personal accounts of his military conquests; he became fascinated with the glory of the Romans, Caesar especially and so sought to become just like him, a powerful warlord who would become the head of a mighty empire.

Sometime in the year 2247, Sallow, Graham, Calhoun and the others were captured by the Blackfoot Tribe. While Sallow believed the tribe did this for ransom, Graham would later attribute the change in the tribe's relationship with the party to a mistranslation. At the time, the Blackfoots were engaged in a brutal war with several other tribes which had hit them hard and reduced their numbers. Knowing that they were on the verge of defeat (and not wanting to go down with them), Sallow decided to utilize his knowledge of warfare to teach the Blackfoots how to win their war (much to the chagrin of his companions). He taught them how to clean and maintain guns, operate with small unit tactics, manufacture explosives and to strike at their weakest enemies first; divide et impera (divide and conquer). The tribe was so impressed with him and his tactical knowledge that they made him their leader and so Sallow took on the name of his idol; Caesar.

Using his new position as leader of the Blackfoots, Caesar began to lay the foundations for his empire. He introduced the concept of total warfare to the tribe and began to lead them against the other tribes. They defeated their weakest enemies first and enslaved those survivors who were able-bodied enough for slave labor. All the others, including the women & children were slaughtered without mercy and their bodies piled high on each other.

When Caesar surrounded the next of the Blackfoot tribe's foes, they refused surrender, so Caesar brought  an emissary of the tribe back to show him what happened to the first tribe. Not wanting to suffer the fate, the tribe immediately agreed to surrender. 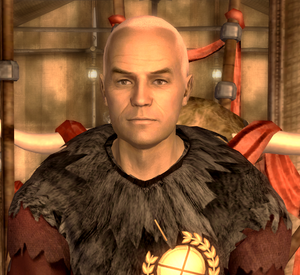 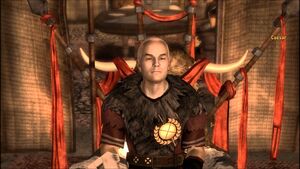 Caesar sitting upon his throne. 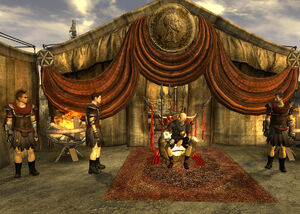 Caesar with his most trusted guards. 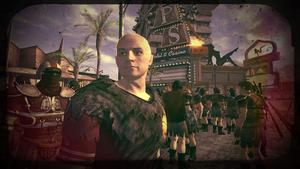