Henchman of the Governor and Citizen of Woodbury (formerly)

Leader of his own survivalist group

Serve the Governor and kill the prison survivors (formerly).

Survive with his new group of survivalists (failed).

In the series he is portrayed by Jose Pablo Cantillo, who also portrayed Amerika from Chappie.

Martinez in the comic book series is a fence guard who first appears when he allowed Rick Grimes, Michonne and Glenn into Woodbury to meet the Governor. After they are tortured by the Governor, Martinez realized how evil the Governor truly was and helped the three escape. When they arrive at the prison, Martinez sneaks away in an attempt to inform the citizens of Woodbury of the location of the prison. On his way back to Woodbury though, Martinez was stopped by Rick, who ran him over with the RV. Martinez admits that he was sent by the Governor, but also says that he intended to bring the good citizens, not the Governor and his men. Rick, however, strangled Martinez to death, saying that he doesn't know what people are capable of. Martinez' head was then found by a Woodbury scouting party, who brought back his reanimated head as a form of propaganda for the Governor to use to rally the townspeople and attack the prison.

Martinez in the AMC TV series is one of the Governor's allies. After Merle Dixon was betrayed by the Governor, Martinez became his second-in-command. In the episode "Arrow On The Doorpost", Martinez reveals to Daryl that his family was killed by walkers, thus creating his hatred for them. In "Welcome To The Tombs", Martinez joined the assault on the prison. After it failed, he joined the Governor in wanting to go back, but then watched in horror along with Shumpert as the Governor massacred all the citizens that resisted. Although he is horrified, Martinez still joins the Governor as he, Martinez and Shumpert drive off to an unknown location.

In Season 4 episode 6 "Live Bait", Martinez and Shumpert abandoned the Governor because of what he did and because he is "dead weight" to them. They continued travelling together but Shumpert was bitten by a walker and Martinez had to kill him. In the episode "Dead Weight", Martinez is shown to lead another group of survivors. They meet the Governor, who is accompanied by a family, and Martinez accepts them into his group but demands that each of them helps in the group. One day, a drunken Martinez takes the Governor on top of an RV where they play golf. There, he says that maybe he and the Governor could form a partner-based leadership, to which the Governor becomes enraged and hits him over the head with a golf club. He then kicks him off the RV and drags him over to a walker pit, yelling "I don't want it" as he lowers a screaming Martinez into the pit where the walkers devour the perished Martinez. In the aftermath, others assume that he got drunk at night and fell onto the walker pit where he perished.

Volume 8: Made To Suffer 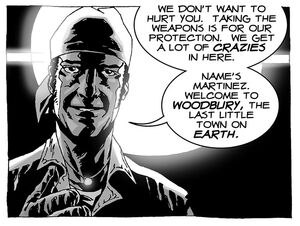 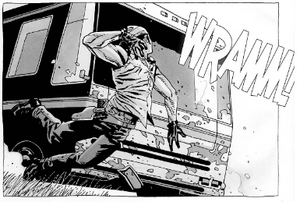 Caesar hit with the RV by Rick 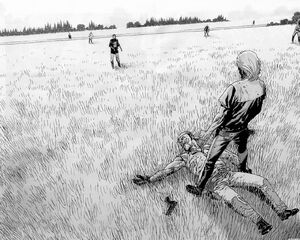 Rick Grimes standing over a dead Martinez in an open field. 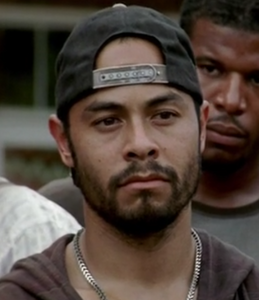 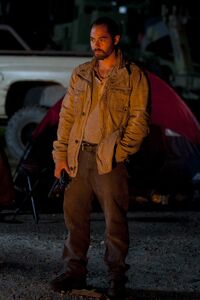 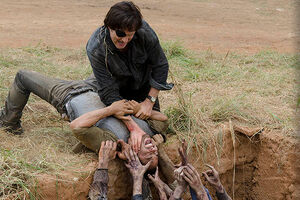 The Governor feeding Martinez to the Walkers