Leader of the Nuke Cult

Ruling over the Nuke Cult.

Embracing and preaching the "holiness" of the Nuke drug.
Worshipping Elvis Presley.

Produce and sell large quantities of the drug Nuke.

Cain is the main antagonist of the 1990 sci-fi film RoboCop 2.

He is a notorious drug lord and the leader of his gang of drug-addicted criminals known as the Nuke Cult. Soon enough he comes into conflict with RoboCop, in which Cain proves to be a unpredictable and dangerous foe who is hopelessly addicted to Nuke - further coming out as an all-violent godlike figure in his delusions and insanity.

He was portrayed by Tom Noonan, who also portrayed Francis Dolarhyde in Manhunter and The Ripper in Last Action Hero.

Not much is known about Cain's past. Yet according to his police record, he served in the Amazon War and was court-martialed, then sent to Danmemora Correctional Facility. He was held at Danmemora for three years, until there was a power outage that caused problems with security, allowing him to escape. He then relocated to Detroit and developed the highly addictive narcotic he calls "Nuke". He creates Nuke without problem due to the police strike happening in Detroit, which was triggered by former Detroit police SWAT leader Lt. Hedgecock, who was obeying Richard Jones's orders to destroy RoboCop (who was fired by The Old Man for murdering Bob Morton and ordering the former to destroy the latter); and the deaths of crime lord Clarence Boddicker and his gang.

Cain and the Cult of Nuke

Cain first appears in the movie talking on the television, preaching as if to a congregation about the divine and pure power of Nuke.

He is seen in person at a Nuke drug lab when RoboCop steps in and halts the procedures. Out of all the targets in the lab that night, RoboCop was unsuccessful in arresting Cain and his remaining thugs - among whom include Cain's henchwoman Angie and his preteen minion Hob - who all slip out of a rear entrance and get to their waiting limo. Inside the limo, they find an illegal immigrant worker from the drug lab; she pleads not to be turned over the police. Cain demonstrates his cold and sociopathic nature by simply shooting her and pushing her out of the limo.

Later on RoboCop tracks down Cain and his thugs at the Sludge Plant near River Rouge, where he captures RoboCop and has him disassembled to continue his criminal activities without interference. RoboCop had obtained the information from a corrupt policeman called Duffy, the latter of whom is also addicted to Nuke. When Cain learns that Duffy is the reason why RoboCop tracked him down at the Sludge Plant, he plans to dispose of him in retritubtion. He has Duffy ambushed and taken captive to a dingy backroom surgery. Thereupon Cain has Duffy eviscerated whilst still alive, during which he forces Hob to watch as well as Angie.

Eventually, RoboCop recuperates and resolves to bring down Cain at all costs. He leads his fellow officers down to the Sludge Plant for an assault on the Nuke Cult. The police officers cleave a path through the guards, but Cain flees with Hob and Angie in two armored bomb disposal trucks, laden with Nuke and tens of millions of dollars of drug money. RoboCop manages to hitch a lift on Cain's truck, but is thrown off due to his wild and furious driving.

Unfortunately for Cain, his sense of power clouds his judgement and he cannot resist but play a game of chicken with RoboCop, who by this time has commandered a motorcycle. RoboCop had no intention of playing by the rules though, and threw himself through the windscreen of the truck, critically injuring the drug lord and crippling the vehicle.

In a similar, but more nefarious, situation to Alex Murphy's death, Dr. Juliette Faxx, an unethical psychologist working for OCP, visits Cain in the hospital. Here, after an unnerving talk with the patient, she pulls the plug on his life support, intending to kill him and use his brain for her RoboCop 2 project.

Remnants of Cain's personality and motivations would later emerge in OCP's RoboCop 2. The cyborg was controlled by feeding the Nuke addiction of its organic interior. RoboCop uses this to his advantage, distracting Cain long enough for him to rip out his brain and destroy it, killing him.

Cain resembles everything a person would expect from a cult leader; he is incredibly charismatic and promises all of his cult followers a path to the promised land if they too became addicts on his drugs. However, he is also unpredictably violent and intolerant of betrayal, having one of his own followers dissected alive when he sold him out to the police.

Furthermore, Cain appears to be obsessed to a degree of fanaticism towards religion - even using a figure from the Bible as his crime name (Cain). However one of his major weaknesses would be his addiction, and to a degree a somewhat reliance on his own drug Nuke to the point where he considers the "power" of the narcotic to be divine and pure. This addiction even carries out when he was transformed into RoboCop 2.

After being killed and having his brain transplanted into the shell of RoboCop 2, the executives of OCP expected him to act and behave exactly like the first RoboCop. However, he retained Cain's old personality. He was unpredictably destructive, killing the rest of his cult in a way to sever all loose ends and going on a warpath across Detroit, leaving destruction in his wake. 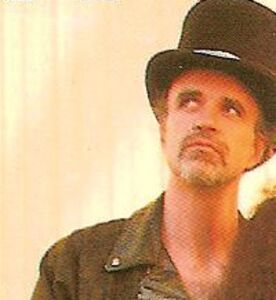 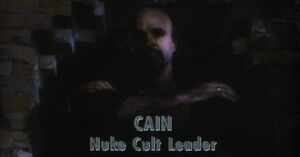 Cain being shown on the news stating "People want paradise. They will have it." 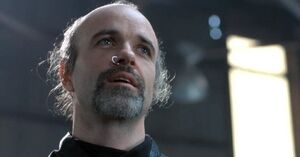 Cain captures Robocop after the cyborg attempts to kill him. 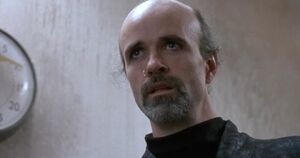 Cain watching one of his traitorous associates being dissected alive with a scalpel. 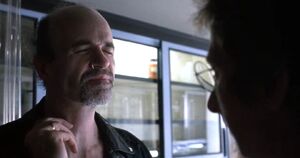 Cain injecting himself with Nuke. 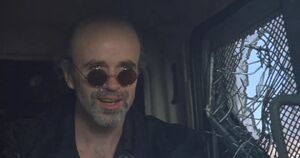 Cain escaping from Robocop in a van. 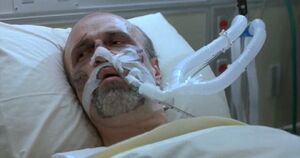 Cain is hospitalized after accidentally crashing his van. 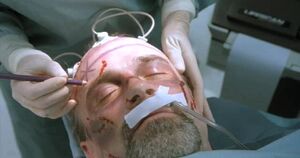 Cain's brain is removed to be used for Robocop 2. 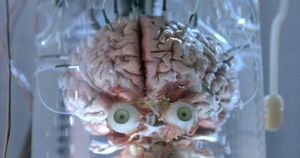 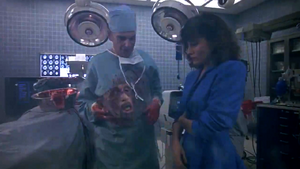