Leader of the Order of Rosenkreutz

Cain Nightlord/Knightlord/Nightroad, also referred to as "Contra Mundi" is a Cruznik who is the leader of the vampire terrorist organization The Order of Rosenkreutz and is the main antagonist of the entire Trinity Blood franchise, as well as the brother of the series's main protagonist Abel Nightroad.

Beginning life as a child in the Mars colonization project, Cain was initially a kind and compassionate individual, but after his fusion with the Cruznik Nanomachine, Cain's personality was drastically altered, and he began to display a childlike demeanor and completely lost any ability to empathize with anyone. His exposure to the nanomachine also drove Cain completely insane, causing him to choose to become a god and wipe humanity off the face of the Earth, utilizing anti-human xenophobia among vampires (Methuselah) to amass an army (the Order of Rozenkreutz) for this purpose. Cain has also shown to be extremely prone to temper tantrums throughout the manga series, as well as to be utterly intolerant of failure, as seen in the anime when he murders Dietrich von Lohengrin, one of his closest lieutenants, for failing him three times. 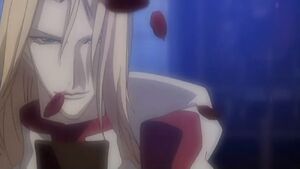 Add a photo to this gallery
Retrieved from "https://villains.fandom.com/wiki/Cain_Knightlord?oldid=3817164"
Community content is available under CC-BY-SA unless otherwise noted.