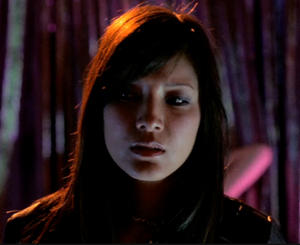 Caitlin is the protagonist villainess from the 2006 film, Devil's Den. She is a hired gun sent after the film's main protagonist, Quinn, and she tracks him to a gentlemen's club, which is revealed to be a den for ghoulish female demons. Caitlin helps Quinn fight off Jezebel, after she morphs into her demonic form, but after that, she reveals her true mission:  that she has been sent to kill Quinn. After learning that her mission is solely based on personal reasons (Quinn sleeping with the wife of a Senator), Caitlin begins to question herself and her past missions, wondering if they were all personal vendettas.

During an encounter with Candy, the queen of the demons, Caitlin's morality is mocked and she suddenly transforms into a demon herself. She later attacks Quinn and intended to make him her first victim, but Quinn reminds Caitlin that she is one of the good guys, and she turns back to normal. Caitlin fights Candy and kills her by decapitating her with a sword.

Caitlin was played by Kelly Hu, who has also appeared on Arrow as China White. 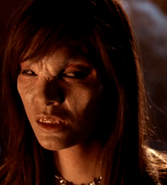 Add a photo to this gallery
Retrieved from "https://villains.fandom.com/wiki/Caitlin?oldid=4215273"
Community content is available under CC-BY-SA unless otherwise noted.