Kidnap Muriel and turn her into stew to win a cooking contest (failed).

Cajun Fox is a nasty and crafty, smooth-talking fox with a very fine Cajun accent who is a villain in Courage the Cowardly Dog.

He appeared in the episode "Cajun Granny Stew" where he kidnapped Muriel, and tried to turn her into stew. He basically appears as a talking fox, and has shades to cover his comical, unrealistically large eyes.

He also considers himself rather lucky.

He is defeated by Courage and next appears in "Ball of Revenge" where he tried to kill Courage with the help of the other antagonists in a game of dodge ball. He then tries to kill the injured dog with a meat cleaver. Courage later uses his "special talent" (that is, screaming) and he creates a hole in the ground, in which, the Fox, and the other antagonists fall through to their presumed deaths. Except for Eustace, who is the lone survivor. 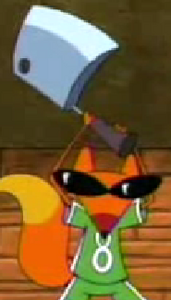 The Cajun Fox is back, this time with a cleaver 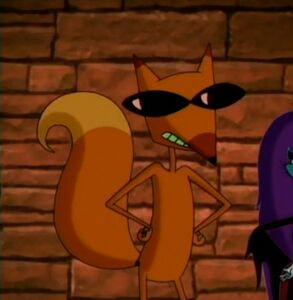 Cajun Fox without his glasses
Add a photo to this gallery

Retrieved from "https://villains.fandom.com/wiki/Cajun_Fox?oldid=4232077"
Community content is available under CC-BY-SA unless otherwise noted.