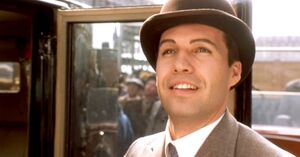 Cal arriving to the Southampton harbor.

Cal about to board the Titanic with Lovejoy, Ruth, and Rose.

Cal takes a stroll on the promenade deck of his cabin.

Cal threatens Rose, stating she is his wife in practice.

Cal learns from Lovejoy that none of the ship's stewards have seen Rose.

Cal showing the riches he has inside his safe.

Cal with his safe wide open.

"Yes there is, I have been robbed!" (Lovejoy: "Fetch the Master-at-Arms.")

"Two things dear to me have disappeared this evening..."

"...and now that one is back, I have a pretty good idea where to find the other."

(to the steward and the Master-at-Arms, referring to Jack) "Search him!"

(Rose: "He couldn't have.") "Of course he could! It's easy enough for a professional."

(Rose: "But I was with him the whole time. This is absurd!") "Perhaps he did it while you were putting you clothes back on, dear."

"Shut up!"- When Jack guesses he has been framed, Cal rudely orders him to be quiet.

Cal being told by Lovejoy that the jacket which Jack is wearing belongs to another passnger.

Cal reminds Rose that he left Jack to die on the sinking Titanic.

Cal tries to stop Rose, when she leaves to save Jack.

Cal and Jack convincing Rose to board a lifeboat.

"I always win, Jack. One way or another."

Cal's villainous breakdown as he takes Lovejoy's pistol to kill Jack, much to the horror of Lovejoy and the other passengers.

Cal running down the Grand Staircase.

Cal making it down the staircase.

Cal forced to give up his pursuit of Jack & Rose, when he runs out of ammunition.

"I hope you enjoy your time together!"

Cal walks back up the Grand Staircase.

Cal ranting of putting the necklace in his coat before giving the coat to Rose.

Cal leaving Lovejoy on his own by telling him to fetch the diamond for himself, much to Lovejoy's anger. 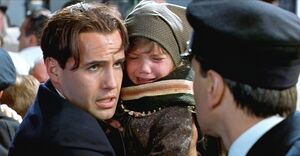 Cal with a child in his arms tries to convince Chief Officer Wilde let him board a lifeboat.

Cal finally giving up his pursuit of Rose, unaware that she has hidden herself in the steerage aboard the Carpathia.
Add a photo to this gallery
Retrieved from "https://villains.fandom.com/wiki/Cal_Hockley/Gallery?oldid=3448560"
Community content is available under CC-BY-SA unless otherwise noted.