Carnival Worker (Until his death).

Rob everyone he wants to (succeeded until his death).

Murderous Thief
Cal Rooney is a minor antagonist in season three of Dexter.

He was portrayed by Joel Weiss, who has also played Cropsey in The Warriors.

While Dexter Morgan is at his dentist, the two have a conversation and he asks Dexter what he did over the summer break. Dexter ambiguously says he "Went to the carnival and won a prize".

In reality he went to an amusement park after hours where Cal Rooney worked and sedated him and made a kill room somewhere in the park. After showing Cal his crimes and collecting his blood slide, Dexter kills him by decapitating him with a meat cleaver. 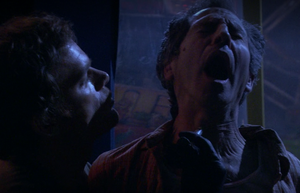 Cal Rooney being sedated by Dexter. 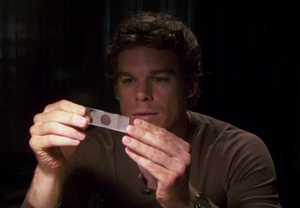 Cal Rooney's blood slide.
Add a photo to this gallery

Retrieved from "https://villains.fandom.com/wiki/Cal_Rooney?oldid=4292472"
Community content is available under CC-BY-SA unless otherwise noted.