Take control over the Divine Beasts and the Guardians (succeeded; but then failed).
Overcome Zelda's power and leave Hyrule Castle (succeeded)
Kill Link and Zelda.
Destroy Hyrule and the world (all failed, presumably ongoing).

Calamity Ganon, also known as just Ganon, is the main antagonist of the 2017 action-adventure video game The Legend of Zelda: Breath of the Wild and likely its upcoming sequel, as well as its prequel Hyrule Warriors: Age of Calamity.

He is a monstrous dark entity, who is a reincarnation of Ganondorf. He is a primal evil that has ravaged Hyrule throughout history, going as far back as ten thousand years. Due to a prophecy stating his return, the people of Hyrule prepared to stop him by creating the Guardians as well as the Divine Beasts, while Princess Zelda tried to awaken her sealing powers as Link protected her.

Calamity Ganon took over Hyrule Castle and brought terror to the land for 100 years, trapping Princess Zelda inside the castle and taking control over the Divine Beasts and the Guardians. During these years, Ganon remained in the castle and try reincarnate back to his former Gerudo self. Link would eventually reawaken after 100 years with little memory of his past and defeat Ganon.

He is the arch enemy of Link and Zelda, as well as the creator of the Blight Ganons and is served by Moblins, Lizalfos and the Yiga Clan.

While Ganon was always was depicted as demonic and frightening, while he is the Calamity Ganon, he is portrayed as a titanic mass of black and purple dark Malice, constantly swirling and distorting, shaping itself as a boar's head with glowing yellow eyes, gigantic tusks and an expansible mouth. This seems to be a premature form of his Dark Beast appearance, which is that of a gigantic purple boar with glowing eyes and a flaming mane.

When he tried to manifest into a physical body, the Calamity Ganon looks like a deformed spider-like abomination. His flesh is made out of malice, but he's also partially made of Sheikah gear and has their weapons attached to his limbs. He has a humanoid skull with glowing orange eyes and a long beard and mane of wild, red hair, remnants of the monster's existence as Ganondorf.

In an alternate timeline where the events of the Great Calamity were altered, Ganon created himself a different body by absorbing its Harbinger and Astor's body. This form, was a lot more humanoid than his spider-like form and relied less on Sheikah technology. It also had boar-like feet, hinting at Ganon's regular form in the series.

In his Dark Beast form, he appears as a giant boar-like monsters composed entirely of malice.

As Ganondorf, his body is that of a Gerudo man with long red hair. It is simply a corpse which has almost completely rotted away. He still wears some Gerudo armor and accessories.

Calamity Ganon differs from his other incarnations quite a lot. He appears as a seemingly mindless monster who only wants to cause destruction and suffering. Ganon is actually referred to as an "it", for, without a proper incarnation, he is but a manifestation of absolute evil and hatred, a barely sentient entity. There is nothing left of his intelligent and cunning side, Ganondorf, which implies this Ganon became completely insane. Despite this the Calamity is still immensely powerful, as his Blights, mere shards of his being, were strong enough to kill the Champions.

He also seems to have maintained some degree of cunning, as he managed to possess the very tools used to defeat him ages ago, suggesting that he was aware of the fact that the people of Hyrule would try to repeat history.

The Calamity first appeared ten thousand years ago, where it attempted to destroy the land of Hyrule. But together with all the Sheikah technology, the princess and her knight were able to defeat it and seal it away under Hyrule Castle. There it was trapped for a very long time. Presumably that what they trapped there, was Ganondorf's corpse.

However, one hundred years ago it started leaking Malice, a viral life form that is basically Evil in physical form, which started to spread in the land. The royal family noticed and prepared for the new reincarnation and trained special Champions of each race to pilot the huge Divine Beasts, four gigantic, animal-shaped, magic-powered warships. Together with an army of powerful, mechanical Guardians, built by the Sheikah for his inevitable return, they should have been able to defeat the Calamity once again. But Zelda wasn't sufficiently prepared and hadn't awakened her sacred powers. So when Ganon emerged, they weren't fully prepared yet. His essence resurfaced and he caught the Champions off guard.

He used his Malice to take control of all the Guardians and used them to destroy the entirety of Castle Town and taking over the castle, slaughtering everyone present, including the king. The Champions were also subsequently killed and he took over their Divine Beasts and implanted a Blight Ganon in each of them. These machines were used to unleash even more destruction and also caused terror for the near settlements. His arrival also surfaced the Yiga Clan. They were Sheikah who betrayed their tribe and started to worship Ganon. Link and Zelda were running away and fighting their way through Guardians who were destroying everything in their path. But Link got fatally injured and Zelda was in tears. She blamed herself for everything, since she didn't get a hold of her divine powers. But through all the suffering around her, she finally found the strength to awaken her power.

She sent Link to the Resurrection Shrine and went to face Ganon alone. He, after destroying many towns and killing countless people by spreading his army of Guardians and monsters, planned to materialize fully.  But Zelda stopped him and managed to bind Ganon to Hyrule Castle. She keeps him confined, but has to use all her strength to do so. Zelda endured fighting with Ganon for 100 years, giving it her all to seal him, while he tried relentlessly to break free of her binds.

The whole thing was a cataclysmic event, so that even 100 years later, most of the kingdom is still reduced to ruins overcome by wilderness, and civilization has heavily regressed, safe for a few settlements. Calamity Ganon is sealed but the Blights are still controlling the Divine Beasts to lay waste on the land, weakening the seal that is about to break anytime soon. Despite being sealed, he still spread his Malice over the entire country, corrupting the land and spawning many monsters. He covered numerous structures, where it festered and destroyed them along with the nature around it. Hyrule Castle is covered in the most Malice, as this is where it stemmed from. Every now and then, a Blood moon appears. At this time, Ganon's powers momentarily increase and he is able to revive all the monsters who were previously killed (excluding Blight Ganon and Master Kohga).

Breath of the Wild

Link awakens again having lost all his memories. Zelda calls out to him and tells him of Calamity Ganon. He is hovering around Hyrule Castle, where he is still confined, clouding it in a dark mist of Malice. He stays there, while Link journeys around the land. He doesn't interfere directly, but always reminds Link of what he must do. In general, he causes a dark presence, that lurks in every corner of the land. Link frees the Divine Beasts and the spirits of the Champions by defeating Ganon's Blights. He then makes his way to the castle and after battling many more monsters, the Hero of Hyrule finally reaches the throne room.

There Ganon lurks within a giant cocoon, that resembles a human heart, attempting to regain his physical form. But Link interrupted him and since Zelda was at the end of her strength, he broke free and regenerated prematurely, leading to him looking monstrous and messy as he was still not complete. The Divine Beasts, whose pilots were rescued, then fired their cannons in his direction, severely weakening him already. Ganon was full of hatred and anger and attacked Link with all weapons he had in his possession. He crawled on the walls and uses many elemental attacks, that the Blights have used. When he is weakened even further, he created a force field around his body that would protect him, but Link bypasses it by reflecting Ganon's laser back at him.

So Calamity Ganon was ultimately defeated. He let out a monstrous roar as his body violently disintegrates and his spirit summoned all the Malice in the kingdom to him and manifested into his true Dark Beast form. Zelda said that the Calamity Ganon had given up on reincarnation and assumed his pure enraged form. He stood in the middle of Hyrule Field and shot giant beams of dark light at Link. Zelda aided the famous Hero of Time and opened up weak points where Link could shoot arrows of light. As Link did so, the Calamity Ganon lost more of his power. Eventually, his core was revealed and Link shot one final arrow into the giant pulsating eyeball. Zelda emerged from within him and she used all her power to seal him again, bringing the land back to peace.

After the second Great Calamity, a small Guardian called Terrako was sent through a time warp 100 years in the past to change the outcome of the disaster. Calamity Ganon sent some of his Malice after it to stop it. The Malice infected the Terrako of the past, becoming the Harbinger Ganon. It was found by Astor who used it to prevent the future from changing. The Harbinger Ganon attempts multiple efforts to stop Link and Zelda, such as possessing other Guardians and leading an army of monsters to Rito Village, causing them to attack Link when they mistook Terrako for the Harbinger.

Ultimately, the Harbinger Ganon infected Hyrule Castle and issued a second Great Calamity, with the help of Astor harvesting the souls of the Yiga Clan. However, the future Guardians arrived to protect the Guardians from the Blight Ganons, preventing the Divine Beasts from falling into Ganon's hands. With support from the races of Hyrule, Zelda and allies raided the Malice infected Hyrule Castle to confront Astor and the Harbinger Ganon. After both are overwhelmed, Astor commands the Calamity to destroy them. The Harbinger instead absorbs Astor into it to create a new physical form for Calamity Ganon, that of a giant humanoid. Despite the heroes' efforts to defeat the beast, Ganon still had enough power to resist Zelda's sealing effort. Its body was so resistant it was also able to shrug off anything the Heroes threw at it. But right before it was able to end Link and Zelda, Terrako jumped in the way and exploded, weakening Ganon enough for Zelda to complete the ritual and seal him away.

Breath of the Wild 2

In the trailer, Zelda and Link find the corpse of Ganondorf deep underground, with Malice still leaking out of his body. The power of Malice seems to grow and manifest once again as Ganondorf's eyes glow up, indicating he might come to life again.

In Super Smash Bros. Ultimate, Calamity Ganon appears as a legendary-rank primary attack spirit with only one support slot and no effect. His spirit battle is against a giant Ganondorf on the Great Plateau Tower with Zelda as an ally. The player takes sudden damage after a while and loses automatically if Zelda is KO'd.

Legend of Zelda: Breath of the Wild 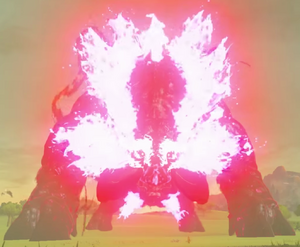 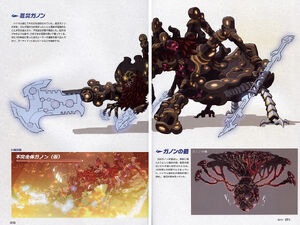 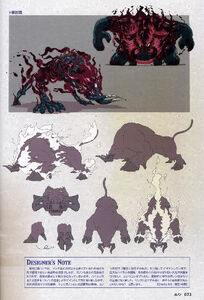 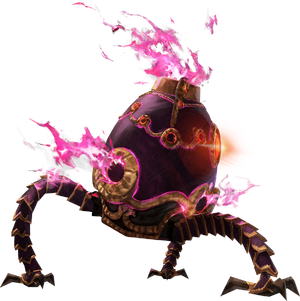 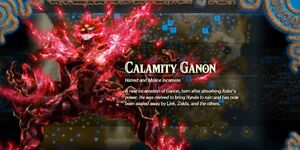 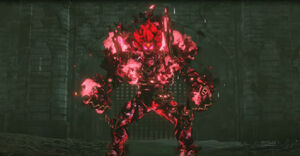 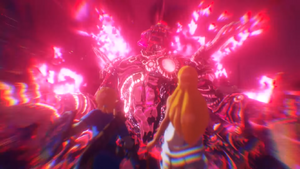 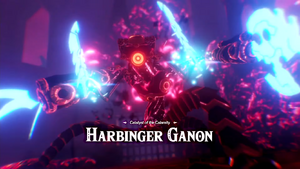 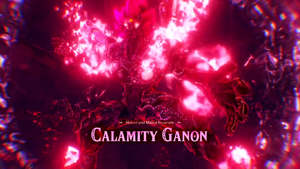 Retrieved from "https://villains.fandom.com/wiki/Calamity_Ganon?oldid=4155150"
Community content is available under CC-BY-SA unless otherwise noted.