Villains Wiki
Register
Don't have an account?
Sign In
Advertisement
in: Male, Elderly, Related to Hero,
and 18 more
English

NOTE: This article is about the incarnation of Calculator from the Arrowverse. The mainstream version can be found here: Calculator (DC).

The Calculator is an antagonist in the fourth season of Arrow. In addition to being a skilled hacker and cyber-terrorist, he is the father of Felicity Smoak.

He was portrayed by Tom Amandes.

After finding out Roy Harper's secret, he blackmails him into stealing parts for building a web nuke. To ensure Roy's loyalty, he watches him through a lens in his right eye, allowing him to see everything Roy sees. While Roy is stealing the last part, a battery from Palmer Tech, he is stopped by Oliver and his team. Oliver shoots him with a special arrow, making it seem like Roy has been killed. They then remove the lens, now dysfunctional, and bring Roy to the Arrowcave. There, Roy briefs them about his employer, the Calculator.

While hacking into the Calculator's network, Felicity is called by the man himself. He acknowledges his opponent's talent, not knowing that Felicity is a woman because she modifies her voice. When by Felicity, he tells her that he has no interest in taking down the internet. Additionally, he tells her that if one wants to make a statement he doesn't shut down the system but a city. He then locks Felicity out of his network, blocking her from attacking him further.

By help of technology from Palmer Tech, Felicity is able to hack the Calculator again and finds out that the Calculator is planting his bomb at a data farm at Flint Hill and informs Oliver, who immediately heads there. Meanwhile, a group of mercenaries the Calculator hired on the dark web install the device, informing the Calculator after having done so. He is happy with their progress, but tells them to hang on a moment when his firewall finds a worm in his network, as Felicity has once again hacked him. While the Calculator virtually fights Felicity, Oliver and Team Arrow attack and defeat his men.

During their hacking race, the Calculator and Felicity converse via loudspeaker and the Calculator tells her that after the web nuke has gone online it will kill three thousand people by blowing the gas mains alone, not counting the thousands more who will be killed in the subway carts. He arrogantly tells her that the only way to stop him would be manually disarming the device, but as she is behind her computer she will never reach it in time. When the nuke is ready to execute, he tells Felicity that he acknowledges her talent and almost feels bad for beating her.

However, when he presses the button to activate his web nuke, he is shocked to see that Felicity managed to overpower him. As he is now trying to break into her system to be able to control his own, Felicity advises her Team to quickly blow up the web nuke to prevent it from being activated. As the Calculator is blocking the frequency, Roy stays behind to manually lit the C4. Outrunning the blast, Roy is able to save himself in time but the building and the web nuke are destroyed. After the team returns, Felicity tells them that she has installed a virus in the Calculator's computer, deleting every information he had on Roy.

Sins of the Father

Felicity has dinner with her father at a restaurant. When he tells her that it is strange for him watching his baby girl drinking coffee. Felicity replies that it wouldn't be if he hadn't left the family eighteen years ago. He tells that it was to keep her and her mother safe, but Felicity retorts by saying that it was to save himself, as he was wanted by the police. Felicity's father asks her whether her mother told her for what the police wanted him. Felicity answers that her mother never bothered to tell her, but that she assumes that it was petty stuff because anything else would require commitment. He claims that he is now willing to answer her any question, tell her anything, but Felicity only wants to know why he came now. He tells Felicity that while he did a job for someone, he was almost defeated. He then tells her that out of curiosity he investigated further, calling Felicity "Overwatch", her alias as a member of Team Arrow.

Felicity realizes that her father is the Calculator and responds by leaving, but her father tries to talk to her, claiming that his work is hardly diabolical. Felicity tells him that she will make sure to tell her friend, whom he blackmailed. Her father compares Felicity's work as vigilante to his own, but Felicity tells him that she is pretty sure that she never tried to kill eight thousand people. Her father assures her that it was an empty threat and that he is not a bad guy. He then hands her a USB drive containing information about the hacks he did in the last years, having chosen those that can be verified by news, to prove that he has no bad intention. He also tells her that he wants to be back in her life and knows that this means having to earn her trust back. Claiming that this is only the first step on a very long road. Felicity then takes the flashdrive and leaves.

Back at the Arrowcave, Felicity tells the team that she met her father and that he is the Calculator.

After checking out the flash drive, Felicity's trust for her father grows. She invites him to PalmerTech, where the two talk. Felicity's father is impressed with some of the inventions there, congratulating her for them. However, later Felicity reveals to Oliver that inviting Noah to PalmerTech was only a test and that after he left, Felicity found out that he left behind a device which sucks in all digital information nearby, thereby stealing information from PalmerTech. She tells Oliver that it seems that deep inside she wanted for Noah to mean what he said, but that her mother was right when she told her that people don't change.

Felicity's father meets her at her office at PalmerTech, having brought a portable rack for her wheelchair. However, Felicity tells her that she has no time for him and that she merely wanted to say goodbye. Noah is caught by surprise, claiming that they merely got to know each other. Felicity answers that she got to know him enough. She then tells him that there is only one thing she knows to be true, that he was wanted by the police. Noah turns to see that Captain Lance has entered the room with other policemen. Felicity leaves the room as her father is taken into custody. Eventually, he is able to break out of Iron Heights.

During their Operation Genesis, H.I.V.E. sends Murmur and Danny Brickwell to kill Cuttler, who is a threat to their plans due to his involvement in the creation of Rubikon. However, Noah can flee from his base before the group arrives. Felicity manages to locate her father at a forest hut where the family spent time in the past. However, Brick managed to track Cuttler down as well. Arriving there first, Brick offers Cuttler to kill him painlessly should he surrender. However, Cuttler shoots one of the H.I.V.E. men with a shotgun and runs away. However, Brick catches up to him, offering Cuttler his trademark routine shot. Before Cuttler can decide either way, the group is attacked by Team Arrow and Noah uses the chance to flee. He is saved by Felicity who drives off with him in a jeep. She returns him to their headquarter where Noah agrees to hack Rubikon. However, as Noah needs PalmerTech technology in order to successfully hack Rubikon and Felicity has been fired, the team needs to break into the company to obtain it. With Felicity, Noah manages to obtain a copy of the device while Oliver fends off security guards.

Back at the headquarter, Noah starts hacking the Rubikon but due to a fail-safe implanted by H.I.V.E., H.I.V.E. is made aware of the headquarter's location. While Oliver and the fighters of his team fend off the advancing H.I.V.E. men, Cuttler continues deactivating the nukes. However, Murmur bursts into the room and shoots at Felicity. Noah shields her from the bullet but this costs him the time to deactivate the last nuke which is activated and headed for Monument Point. Although felicity manages to redirect the missile, the detonation still kills tens of thousands.

Two years later, Noah accompanies Donna to the wedding of their daughter Felicity with Oliver Queen. While he dances with Donna, he thanks her for letting him back in Felicity's life. The dance is interrupted by Quentin Lance, whom Donna was dating briefly after breaking up with Noah. Sensing the awkwardness of the situation, Noah leaves for the bar. 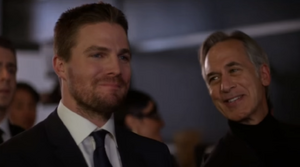 The Calculator at the presentation, seated next to Oliver 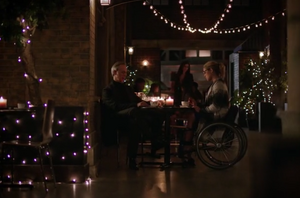 The Calculator meets his daughter Felicity 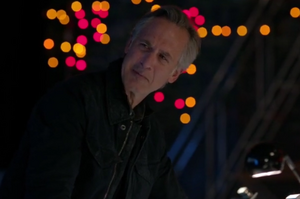