The One that Binds (after absorbing Tchernobog's essence)

Leader of former Chosen of Cabal

Killing and torturing his enemies.

Avenge his comrades by killing Tchernobog and his minions.

Resurrect his comrades and defeat Gideon and the Ancient One (both succeeded).
Escape from The Ancient One's dimension and seize power in Cabal (ongoing).

Caleb is the main protagonist of the Blood franchise. He is the leader of the four Chosen and is by far the most powerful, renowned for his aggressive nature, his sadistic tendencies, and his violent sense of sarcastic humor. He used to be a loyal servant of the Cabal cult until he and his comrades were betrayed by Tchernobog.

He is voiced by Stephan Weyte, who also voiced Nyarlathotep in Dusk.

Caleb was born in western Texas in 1847. By the age of seventeen, he was well-known as a merciless gunfighter with a hunger for bloodshed. One day, he met Ophelia, a woman who was a member of a cult called Cabal along with her husband.

When her husband tried to leave the cult they responded by torching their homestead, killing him as well as their young son. After that Caleb who fell in love with her took her under his protection. Ophelia later became the doorway to the cult for Caleb. He and she rose through the ranks to become two of the Chosen, the elite servants of Tchernobog. Along with Ishmael and Gabriel, the four Chosen served the dark god well, preparing for the day when He would take over the world.

One day, Tchernobog summoned the four Chosen to himself. As they were waiting for his orders, the dark god said that they have failed him and proceeded to disavow them. His lieutenants kill Ophelia, Gabriel, and Ishmael while Tchernobog himself casts Caleb into a bottomless pit.

Eighty-one years ago in 1928, Caleb awakens to find himself entombed inside a mausoleum in Morningside Cemetery. Armed initially with only a pitchfork, he fights his way through a long and bloody quest to retrieve the other three Chosen and find some answers. Eventually, he defeats all of Tchernobog's lieutenants and makes it to the dark god himself. There, Tchernobog reveals to Caleb that he killed the Chosen in order to ensure that Caleb will come back, seeking vengeance, and with the strength of each life he had taken making him stronger than he "ever could have wished". However, Caleb defeats him in battles and absorbs his essence.

Between the events of Blood and Blood 2: The Chosen Caleb has travelled around the world, seeking for ways to resurrect Ophelia and the other Chosen. Little is known about Caleb's doings in this time period. For example, it is known that he traveled to Carpathian mountains, where he finds an ancient scroll guarded by Cabal and takes it for his own use. Additionally, he found out that Cabal is training new Chosen, who he successfully destroys later.

By the year 2028, the Cabal had reorganized themselves as the monopolistic mega-corporation CabalCo, under the watchful eyes and visionary leadership of Gideon, a man who was groomed for the role. The Cabal regained their quest for world domination, almost totally controlling the world through both economic and political power. Despite this, Gideon still felt unsatisfied as long as Caleb, the Great Betrayer, continued to walk the Earth. Whether due to his pride or because he wanted to assert total control over the Cabal, Gideon seeks Caleb out, throwing all of his vast resources against him.

However, Gideon fails to kill Caleb in the end. He attempted to do so with an interdimensional weapon called Singularity Generator, but it failed and instead resurrected Gabriel (who came back as Gabriella) and Ishmael. Ophelia was the first one who was resurrected, but needed to be rescued by Caleb in Gideon's temple.

Eventually, Caleb rescued Ophelia and defeated Gideon in battle. Later he faces The Ancient One, an interdimensional being who wants to destroy all of reality. After he is defeated, Caleb has no choice, but to seal the rifts in order to prevent reality from destruction. After that, he and the Chosen are trapped in another dimension, trying to find a way to come back home. However, in-game it was stated that Caleb is also striving for leadership of Cabal, which possibly means that if they escape from The Ancient One's dimension, it is very likely that they will next aim for seizing control of Cabal cult.

Caleb is a very cold-hearted, ruthless, amoral, and nihilistic killer motivated only by his personal desires. When fighting his way through to Tchernobog, he didn't express any sort of care or pity towards innocents captured, tortured, and sacrificed by Cabal. In addition to that, he loves making sarcastic remarks about what he sees or when he kills his enemies with joy. He has no sense of right and wrong and just does what he wants to do, without caring about anything other than his desire for revenge and pain he can cause. His other notable quality, however, is his deep love towards Ophelia and care towards the other two Chosen who he considers his friends. 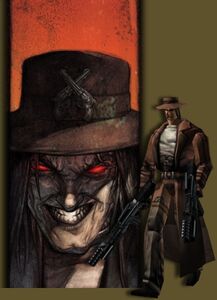 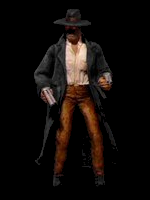 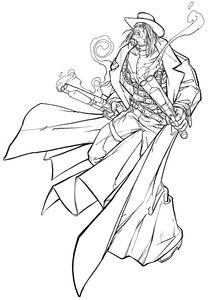 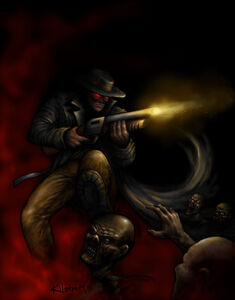 Caleb on the Heroes Wiki

Caleb on the VS Battles Wiki