Caleb is one of the final antagonists in the Buffy the Vampire Slayer TV series. He was the lead follower of the First Evil. He was introduced because of the fact that the First Evil was a spiritual force, and thus the show's creators felt the gang required a physical opponent to act as a kind of avatar for the spirit.

He was portrayed by Nathan Fillion.

Prior to becoming the right-hand man of the First Evil, Caleb (who was originally known as Father Caleb) was an ex-priest and serial killer responsible for the deaths of at least two girls, who he lured to their fate using his charisma and charm.

However by the time the First Evil surfaced in Sunnydale Caleb had made himself a loyal follower and was the prime mover for the events of the final series — in an effort to eliminate all threats to the First Evil's return he directed hordes of Bringers to kill of potential Slayers around the world as well as ordering the bombing the the Watcher's Headquarters in London — causing the deaths of several prominent Watchers.

Caleb soon personally murders two Potential Slayers and effortlessly defeats Buffy, Faith and Spike — forcing them to retreat. In this battle Caleb also blinds Xander in one eye via ramming his thumb into his left eye socket — which resulted in Xander wearing an eyepatch for the remainder of his life.

In the series finale, Buffy, with help from Angel, manages to pierce his abdomen with a mystical Scythe and seemingly kills him. However, Caleb is revived stronger than before by the First and knocks Angel out cold; he and Buffy then proceed to have a battle before she finally manages to slice him in half — ending his threat once and for all.

However, even after his death, Caleb returned as one of The First's final forms.

Caleb had psychic abilities that allowed him to detect the aura and powers of opponents, read their minds and channel the power of the First Evil for extended periods; when Caleb merged with the First Evil he gained temporary superhuman strength, stamina, and durability far superior to that of most vampires, demons and Slayers. 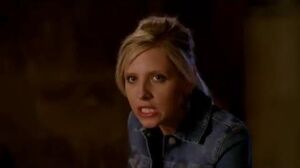 Buffy vs Caleb (Nathan Fillion) - Duel in the Guardian's Crypt
Caleb's final battle and death.
Add a photo to this gallery

Retrieved from "https://villains.fandom.com/wiki/Caleb_(Buffyverse)?oldid=3887362"
Community content is available under CC-BY-SA unless otherwise noted.