CEO of the DBR Corporation

Punish humanity for their destruction of planet Earth (initially sueeccded).

Caleb Goldman (referred to simply as Goldman in the games) is a major antagonist in The House of the Dead game series. He is revealed as the true mastermind behind Dr. Curien's inhuman experiment, as well as the zombie infestation in the 2000 Venice Incident, where he sought to "revert humanity to its natural state" as a means to "restore the balance of nature".

Goldman is the head of the DBR Corporation and is known as the brains behind the zombie infestations during the 1998 Curien Mansion Case as well as the 2000 Venice Outbreak, where he sought to "revert humanity to its natural state" as a means to "restore the balance of nature". He is also responsible for the events in The House of the Dead 4 and possibly The House of the Dead 3.

Although Goldman does not appear during the main storyline of the first House of the Dead game, it is revealed that he hired a scientist named Dr. Roy Curien to assist him in achieving his goals (and secretly to act as a decoy, to mask who is really responsible for the zombie outbreaks). After two AMS agents named Thomas Rogan and G are dispatched to deal with the mad scientist at his mansion, Curien is killed and Goldman stumbles across his corpse before taking all of his research.

On February 26, 2000, 14 months after the Curien Mansion incident, with the research of Dr. Curien in his hands, Goldman unleashes a wave of zombies upon Venice, Italy. Upon hearing of the arrival of AMS agents James and Gary, he leaves a message on one of the agents' cellphones, taunting them and inviting them to come to the coliseum. When the agents eventually reach the coliseum, Goldman appears to them on a large screen and claims that in time they will see who is right, before releasing an enormous chainsaw-wielding assassin to deal with them.

Afterwards, Goldman directs his attention to his master creation, the Emperor (a being designed to watch over and hate mankind, and prevent them from causing any more destruction to the world). When everything is set in place, Goldman simply waits for the AMS agents to come to him at his headquarters. Once James and Gary arrive, Goldman explains the reasoning for his actions, and uses the life cycle as a basis for this. After explaining himself, Goldman unleashes the Emperor. The two AMS agents engage in battle with the Emperor and eventually destroy it.

Upon the Emperor's defeat, Goldman serenely claims that his ultimate scheme is not over yet, and that in time a successor will come. Following these words, Goldman calmly commits suicide by throwing himself off the roof of his headquarters, plunging to what James and Gary presumed would be his apparent demise. However, even after his death, the threat of Caleb Goldman and his dark agenda was far from over.

Goldman appears once again as the main antagonist in The House of the Dead 4, although in this game, he is only shown through recordings and flashback scenes in which he reveals his true feelings about humanity. Before his demise, however, Goldman had arranged a backup plan that allowed a second outbreak to be carried out in 2003, three years after the events of the original infestation in Venice. A third outbreak was also successful, as seen in The House of the Dead III.

Throughout this game, AMS agents Kate and James battle countless zombies without any knowledge of who is actually behind the outbreak, though James has an ongoing suspicion that the events from 2000 hadn't ended as they thought. After finding Venice completely in ruins, James suddenly receives an email from Goldman, with a recorded message which states that "everything's set" and that they have only one hour until a nuclear missile launch.

The two set course for Goldman's headquarters, eventually reaching Goldman's office, where they are greeted with another recorded message left by Goldman. Here, he claims that his goal was not to destroy all humans with the nuclear missiles, but rather to revert them to their natural state. He then reveals that Pandora's Box has been opened just as his master creation, The World, appears from within the courtyard in front of the building. Kate and James battle The World, but realizing that it cannot be defeated with gunfire alone, James sacrifices himself in order to prevent Pandora's Box from opening, destroying The World and finally putting an end to Goldman's plan.

When Goldman first appears, he seems to be stoic, cold, and calculating human being who has extensive knowledge of the Genome theory. He has a deep contempt regarding what humanity might do because of their self-destructive, disruptive nature. Goldman also seems to be calm and unshakable most of the time, seeing confidence that his vision of a world free of the destruction by a wrought man will indeed come to pass. When he is confronted by his enemies who want to thwart him, he is civil and polite and calling them "friends". He never rise his serene. However, with a stern tone, even after his defeat. But he was still very reserved and controlled. 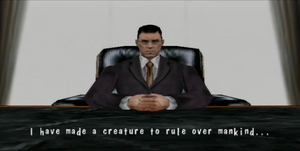 Goldman in The House of the Dead 2 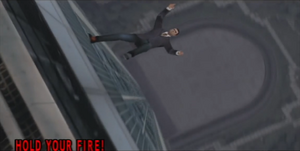 Goldman committing suicide from the roof of his headquarters 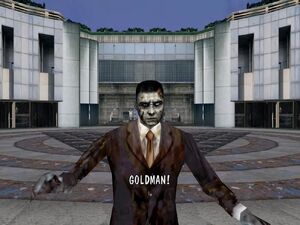 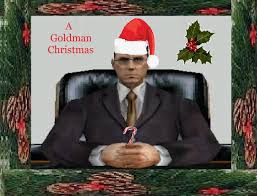 A festive "spoof" of Goldman. 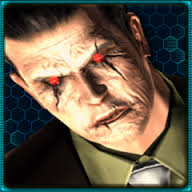 Goldman seen in the sequence in The House of the Dead: Scarlet Dawn.

Goldman seen along with Curien and Thornheart in a photo together. 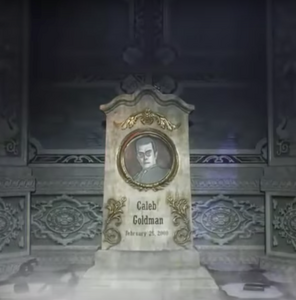 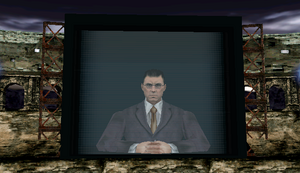 Goldman at the Coliseum. 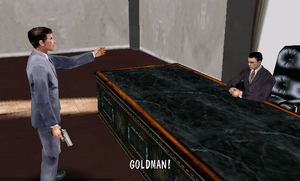 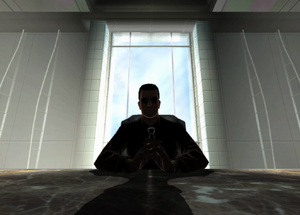 Goldman in his office, quietly ranting about the future of mankind. 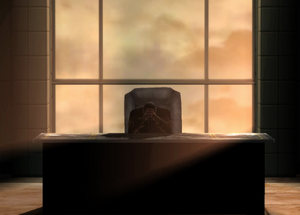 "Must we simply sit and wait for it all to end? 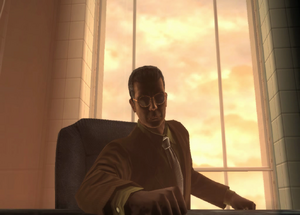 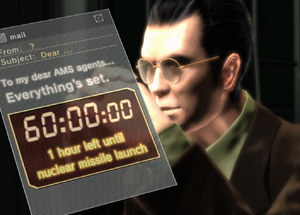 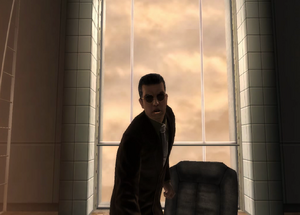 Goldman claiming Earth has "evolved" in a way that can regulate any given species, including humans. 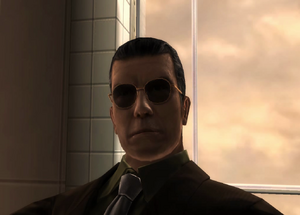 Goldman watching James and Gary infiltrate his office, before warning that Pandora's Box is opening. 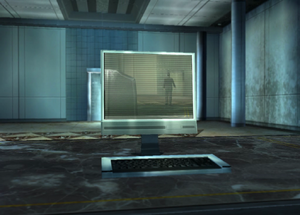 Goldman's cryptic message for the viewer to "travel north", as seen in the game's standard ending. 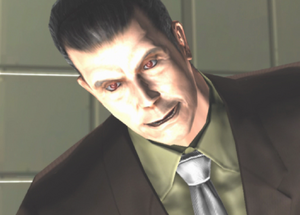 Goldman without his glasses, as seen in one ending. 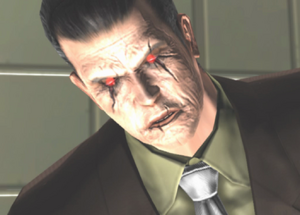 Goldman's transformation into a creature, as seen in one ending. 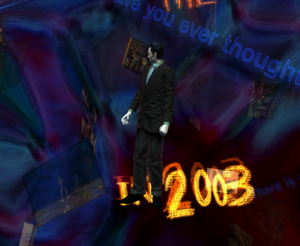 Goldman in the game's attract mode, surrounded by phrases and images from The House of the Dead 2. 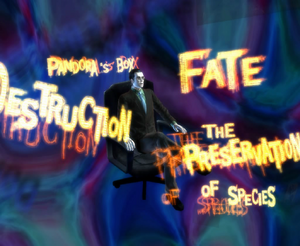 "There's no way to escape your fate, James."

Goldman in the CEO office. 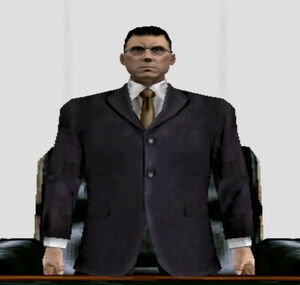 Goldman being confronted by the AMS agents. 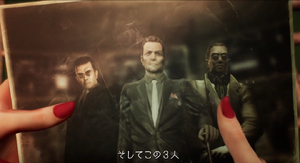 A close up of Goldman.
Add a photo to this gallery

Retrieved from "https://villains.fandom.com/wiki/Caleb_Goldman?oldid=3417287"
Community content is available under CC-BY-SA unless otherwise noted.