Vice Admiral Caleb Thies is a supporting antagonist in Call Of Duty: Infinite Warfare. He is one of the most powerful leaders of the Settlement Defense Front military known as SETDEF, second only to Salen Kotch.

He was voiced by Peter Weller, who also played Mr. Yin in Psych, Alexander Marcus in Star Trek: Into Darkness and John Frederick Paxton in Star Trek Enterprise.

At the SETDEF academy, Thies was reportedly Kotch's rival. Kotch finally managed to beat his rival, becoming admiral whilst Thies was only able to become Vice Admiral, and later became the commanding officer of the Icarius. He is shown to have a great hatred of the people of Earth and the UNSA, stating that the SDF will rip them from the history books.

Thies, in his position of Vice Admiral, conspires with Kotch to initiate an assault on Geneva which results in the deaths of millions of civilians so that Akeel Min Riah can destroy the AATIS tower.

Soon after, Thies, Captain Oren Emin and Captain Khosi Sidaya meet for important strategy talks onboard the SDF destroyer Icarius, but are followed there by game protagonist Captain Nick Reyes and Lieutenant Nora Slater. Reyes either asphyxiates them all by setting off a charge in their life support, or shoots them all to death depending on player choice. Afterward, Reyes and Slater escaped from the destroyer, and continued on killing high-ranking SDF officers.

If the player doesn't choose to play the mission, Thies and the others survive and Thies continues leading SETDEF likely as the new admiral and one of the other few highest ranking officers left to survive. Also not killing Thies allows the vice admiral to beat Kotch indirectly, and will presumably continue to fight against the UNSA after the destruction of the SDF Mars base. 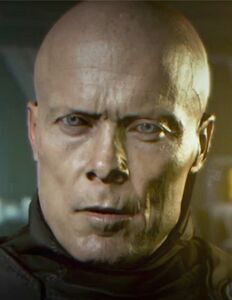 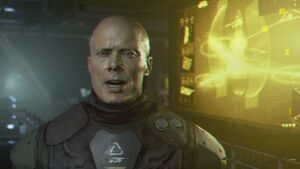 Retrieved from "https://villains.fandom.com/wiki/Caleb_Thies?oldid=3464248"
Community content is available under CC-BY-SA unless otherwise noted.