Wearing costumes that correlate with the dates of his crimes.

Julian Gregory Day, also known as the Calendar Man, is a supervillain from the DC Comics universe. He is an enemy of Batman. He is a criminal who is fixated on calendars, dates, and holidays, and thus commits crimes themed around them, usually on the specific holidays.

Calendar Man is obsessed with dates and calendars. His crimes always have a relationship to the date that they are committed. The theme may be related to what day of the week it is or to a holiday or to a special anniversary on that date; he will plan his crime around that day. He often wears different costumes which correspond to the significance of the date, though he does have a main costume which has various numbers (meant to represent days on a calendar) sprouting from the shoulders.

The hunt for him proves dangerous for Batman considering a confrontation on Thursday led to him being hit with Calendar Man's ultrasonic sound weapon and almost killed, forcing him to convalesce in bed for days while the supervillain committed his Friday and Saturday crimes without serious opposition. On Sunday, knowing that the police would be waiting for him to attempt to steal an artifact of the Egyptian God of the Sun, Ra, he planned to leave the city instead on a train called the Western Sun Express. Fortunately, Batman realized this move and captured him at the train station before he boarded. This issue also marked the first appearance of his most commonly known "calendar cape" costume.

His next appearance in Batman #384-385 (June–July 1985) and Detective Comics #551 (June 1985), sees the Calendar Man at the onset of the Crisis being used as a pawn of the Monitor in an attempt to find someone to potentially eliminate the Batman for profit. In this instance, the Calendar Man's theme is holidays, and he attempts to use the young Jason Todd, as Robin, as the Batman's Achilles' heel with the promise of his demise on the first day of Spring, but it is ultimately Robin who is responsible for his defeat.

Calendar Man's crimes are generally petty and often ridiculous in nature with unnecessary flashiness. For instance, at the conclusion of Day's week spree, he took the time to needlessly change into his calendar cape costume at the train station even while Batman was in hot pursuit. As such, he is notorious among both heroes and villains alike for being something of a joke. Consequently, his post-Crisis appearances have been few and far between. He was once recruited by Killer Moth to form the villain team known as "The Misfits".

His best-known latter day appearance is in the miniseries Batman: The Long Halloween, where he is portrayed as a Hannibal Lecter-like figure, offering insight in Batman's search for Holiday, a serial killer who uses holidays as his modus operandi. Like Lecter in The Silence of the Lambs, Calendar Man knows who the killer is and keeps this information to himself, choosing instead to taunt the heroes with cryptic clues. He returns in that story's sequel, Batman: Dark Victory. In both stories, he is bitter that the new murderous rogues have taken the attention off him; Day fears that he is being forgotten. To that end, he tries to drive the Holiday Killer, Alberto Falcone, to suicide by pretending to be Falcone's recently deceased father Carmine, but Alberto figures out the ruse.

Calendar Man is severely injured by Sofia Falcone near the end of Dark Victory, described as being barely alive and having his jaw broken.

Batman: Shadow of the Bat

Calendar Man is also known for teaming up with Catman and Killer Moth as part of The Misfits, a group of third-rate villains trying to prove themselves, in Batman: Shadow of the Bat #7-9 (1992–1993). Also, he is among the Arkham Asylum inmates freed by Bane in Batman: Knightfall, but he is easily recaptured by Power Girl shortly after his escape.

He appears in Team Titans #14 (November 1993). He and several other time-based villains, including Time Commander, fight the title's heroes over a valued hourglass.

All the Deadly Days

Day appears in the third issue of the 80 Page Giant Batman Special Edition (July 2000) entitled "All the Deadly Days". He has acquired a new high-tech costume, and moves up to more grandiose crimes.

Day makes an appearance in the alternate reality story Superman: Arkham (beginning in Superman Vol. 2 #160). As the story begins, the Joker has recently stolen the reality-altering powers of Superman's enemy Mr. Mxyzptlk. In the warped planet Earth created by the Joker, Superman is a prisoner of Arkham Asylum, in the custody of warden Solomon Grundy and his assistant Calendar Man. Day's appearance is carried over from his revitalization in Batman: The Long Halloween and Batman: Dark Victory.

Day appears in Harley Quinn's series, as an inside informant to the fugitive.

In books of The New 52, a reboot of the DC Comics universe, the character appears as a lifestyle reporter in a series of backup stories called "Channel 52". In one, he claims to have kept up a video diary out of scavenged materials because basic human civilization has fallen and Day fears nobody else will be recording the day-to-day events.

In the books of DC Rebirth, Calendar Man's body ages and rejuvenates according to the seasons.

An older Calendar Man appears in the Batman Beyond comic book arc "Hush Beyond" (which is set on Earth 12 in the DC Multiverse). From his wheelchair, he builds a greeting card rigged to explode, intending to kill Commissioner Gordon. Batman arrives to stop him, only to be confronted by Hush. Hush mentions that Batman's "true family" is his many enemies and he plans to destroy it. He then proceeds to kill Calendar Man.

Batman: Brave and the Bold

The Batman: Brave and the Bold version of Calendar Man appears in the story "Last Christmas!". In this show, he is voiced by Jim Piddock.

He plans a Christmas crime, only to encounter Batman. When a zeta beam teleports Batman away, he claims it to be a Christmas Miracle, minutes before Earth is destroyed. After Batman and Adam Strange restore Earth, Batman proceeds to easily defeat Calendar Man.

In the episode "Legends of the Dark Mite" Bat-Mite keeps bringing in powerful opponents or Batman to fight. However, Batman tricks him into bringing in Calendar Man. However, after seeing how weak and short of a fight it was, Bat-Mite gives Calendar Man powers to summon holiday monsters has biker Santa's and monster bunnies. After defeating most of his monsters Batman catches him off guard and knocks him out. Bat-Mite then teleports him away.

In the episode "Mayhem of the Music Meister", he is one of the singing prisoners in Arkham Asylum. In the episode "A Bat Divided", he makes a cameo in a bar where Batman villains hang out.

In Week 20 of the weekly series 52, a radio broadcasts a message saying that Calendar Man was left tied up for the cops in Gotham City, even though there is no Batman. It is revealed the new heroine Batwoman was responsible for his capture.

Calendar Man appears in the prequel to Injustice: Gods Among Us. In Chapter Fifteen, he is frustrated when Robin does not recognize him, and attempts to remind Wonder Woman of an encounter they had where she broke one of his ribs as she thwarted a crime he was attempting to commit, and becomes despondent when she only glares at him. In Chapter Sixteen, he takes part in Harley Quinn's riot and helps Killer Croc hold Batman down as the Riddler prepares to crush his skull with a large rock, but Batman breaks free thanks to Green Arrow. Calendar Man is next seen fighting Nightwing, but is easily held back by the hero. Calendar Man is last seen among the inmates who sorrowfully watch Batman carry Nightwing's body out of the Asylum.

In this musical he robs a TGI Fridays for its funny wall pictures. Batman and Robin quickly defeat him. He uses many holiday puns.

Calendar Man appears as a villain in The LEGO Batman Movie.

He is first shown in a news report showing him being captured by Batman and sent to Blackgate Peninentiary on death row. Batman later passes by his cell where he has holiday crime plans and dates listed. Black Mask (Joker in disguise) and Killer Croc later find him about to be executed by Commissioner Loeb and release him.

Calendar Man doesn't appear in the game Batman: Arkham Asylum. One of the Riddler's riddles revolves around him. His cell has scattered calendar pages in it.

He has an entry in the Character Bios. His profile states: Fixated on the calendar, Julian Day became Calendar Man, a villain who timed and tied his crimes thematically to certain holidays throughout the year, often leaving clues by which he could be caught. Gotham City’s hopes for a day off are often clouded by the knowledge that any holiday of note is likely to be shadowed by Calendar Man’s presence.

While Batman was in the Courtroom he comes across Calendar Man in a cell. If he decides to talk to Calendar Man on twelve certain days, one on each month, he tells a spooky story on what crime he committed on that day. After he told all twelve crimes, Calendar Man somehow managed to escape and has murdered someone.

On Labor Day, Calendar Man murdered several people inside the Campbell Calendar Company, part of a plan to draw out Batman. The Arkham Knight had given him Electrocutioner's gauntlets to disable Batman's communications. To Batman's great surprise, Calendar Man had gathered seven clones of Solomon Grundy, named after each day of the week, whom Calendar Man claimed to have created. Over the week it took Batman to defeat all of the creatures, Calendar Man had kidnapped a newborn baby. He then gave the exhausted Batman a list of names and told him that those people had been poisoned and had 24 hours to live. He instructed Batman to save them all and then return to him. If Batman failed to save all of the people on the list or brought any of his allies with him when he returned, Calendar Man would execute the baby. The listed citizens were saved but before Batman returned as ordered, the Scarecrow visited Julian to dissuade him of his attempt to kill Batman. Grudgingly, Calendar Man relented and gave up the baby without a fight.

Before Knightfall Protocol that destroyed Wayne Manor and presumably killed the Batman was activated, Calendar Man could be seen hiding among the crowd, witnessing Batman's presumed death and fulfilling his vow that he would witness the whole life of the Dark Knight. 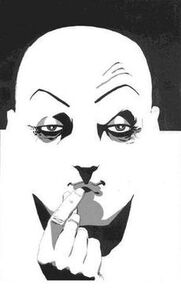 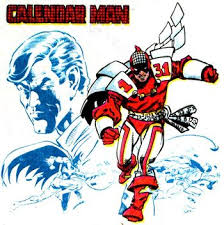 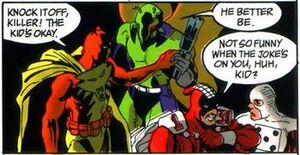 Calendar Man with The Misfits 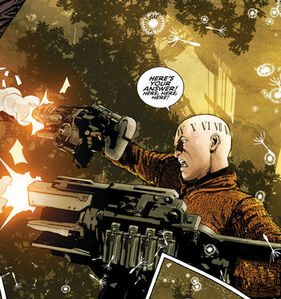 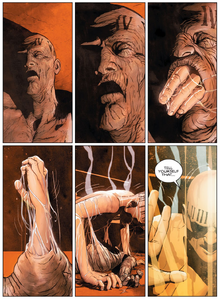 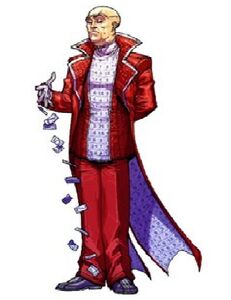 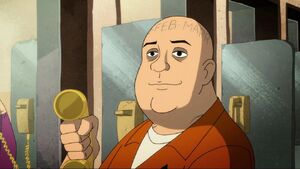 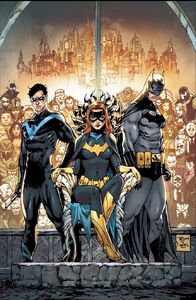 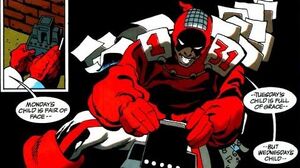 Retrieved from "https://villains.fandom.com/wiki/Calendar_Man?oldid=4086429"
Community content is available under CC-BY-SA unless otherwise noted.