Not to be confused with his adult version, Lord English

Become all-powerful and destroy everything.
Become an artist.

Caliborn is a cherub with cherry red blood and a major antagonist of the webcomic Homestuck. He is the brother of Calliope as well as the younger version of Lord English, making him the overarching antagonist of Homestuck.

Caliborn is the so-called brother of Calliope, with whom he shares body with. He is extremely ornery and disrespectful, the exact opposite of Calliope.

He is a Derse dreamer, while his sister is a Prospit dreamer. He calls himself a "Derse guy" when explaining to Dirk why he can't kill his sister himself (hence the fact he has to hire Agents to do his dirty work)

Later on it is revealed that Caliborn is the Lord of Time, confirming that:

1. He is one of the essential players of his session, the other being his sister as the Muse of Space.

2. Due to his Classpect, it is revealed and confirmed that he is the young Lord English.

Caliborn's typing is the exact opposite of Calliope's, capitalizing every letter except for "u". However, he later changes his font color to lime green, claiming the trophy of killing his own sister by typing in her own blood color. He also begins capitalizing "U".

He is possibly the most argumentative and rude character in the comic with second being Karkat. He also seems to be the "most alien" of all of the characters in the comic. He has a great obsession with playing games with his love for them surpassing the human ability to comprehend love, as stated by Calliope.

Aside from his time powers which he surely hasn't used yet, he is a "very skilled" artist in development. He is the one and only creator of Homosuck, a mockery of Homestuck. He also seems to be able to break the 4th wall due to his interactions with Andrew Hussie. He feels no remorse whatsoever for killing his sister, if that can be called an ability. And he surely doesn't give a damn about his pain. He also is protected by his adult self power over reality.

Caliborn makes his first appearance in Act 6 Act 2. Although his body is not revealed he contacts Dirk Strider under the name "undyingumbrage". He tells Dirk that The Condesce will try to kill Dirk because Dirk messed with her. While Dirk is fighting the Condesce's drone minions, Caliborn messages Dirk in the past and tells him that in the future he will tell him a big plot twist about his sister. He then tells Dirk that in order for him to tell Dirk the plot twist Dirk must send him pornography. When Dirk sends Caliborn "pornography" (which, in reality, is just SFW ship art of Dirk and his friends), Caliborn messages present Dirk that he will not find out the plot twist for another year.

In Act 6 Act 3, Caliborn hires Jack Noir from his session to kill Calliope in her dream so when Calliope goes to sleep she will never wake up again. Caliborn then tells this to Dirk as the big plot twist. Caliborn is then finally revealed laying on his bed and waking up.

Once he wakes up, he frees himself from the shackle he attached to his leg. As for the other leg, which held Calliope's chain that only she could release, Caliborn bit it off and replaced it with a robot leg instead. As a result of this, Caliborn prepares to enter his Sburb session alone. However, the game is not meant to be played alone, which leads to him only being given a Cruxtruder and the kernelsprite collapsing into a black hole.

In Act 6 Intermission 4, Caliborn walks a long way and finds his adventure to be boring and for nothing. However, he sees Gamzee Makara approach him and attempt to be his guide. Caliborn then proceeds to gun him down with hundreds of bullets.

When Caliborn thinks Gamzee is dead, Gamzee crawls to him and gives him a green box. Caliborn connects this green box with one of the hundreds of computer screens. The computer screen turns on, revealing Jane Crocker. Caliborn starts contacting Jane and taunts her by telling her that Calliope is long gone and forever dead. Jane throws a fit of rage and smashes her computer because of this.

In Act 6 Act 5 Act 1, Caliborn is offered a crowbar by Gamzee. Caliborn takes the crowbar and smacks Gamzee in the face with it. Caliborn then hears a voice in his head that represents the narrator of Homestuck, Andrew Hussie. The narrator taunts Caliborn by telling him that Gamzee would have been useful to him. Gamzee appears to be alright and alive so Gamzee creates Lil Cal. Caliborn begins to think that he is a part of Lil Cal. John appears behind Caliborn and they both stare at each other for a while before John zaps away. Caliborn also draws all over Calliopes fan fictions by scribbling words like "Calliope is stupid," "Calliope's friends won't miss her when she's dead. Aranea also says that Caliborn and Calliope's parents were rivals that mated and Gamzee Makara was the one that raised Caliborn and Calliope after they were abandoned. Once Gamzee realizes Caliborn's dangerous power Gamzee puts him in a shackle In a small room. This also meant that Calliope would be in the shackles as well.

Caliborn immediately starts working on Homosuck which is a gay perverted fan fiction by Caliborn. When John accidentally teleports into Homostuck he sees how bad Caliborn is at making the story and how perverted he is. Caliborn keeps bugging John to the point where John completely flips out and vows to kill Caliborn. John then teleports behind Caliborn and they both stare at each other for another while. When there done staring at each other they prepare to fight.

Because of what John saw in Homosuck, John's gay thoughts get the better of him which gives Caliborn an advantage to attack John. The tables later turn on Caliborn and John beat him up. John could have possibly beat him to death but because of John's random teleportation he teleports away from Caliborn, who is left bleeding on the ground. Caliborn says that it was the worst thing that could possibly happen to him.

Caliborn walks into a temple where his footsteps cause fire to emerge from the ground. He gets to the end of the temple and saw his denizen, Yaldabaoth. Caliborn puts on an evil grin as he prepares to hear Yaldabaoth tell him his destiny.

Instead of hearing his destiny, Caliborn attempts to kill Yaldabaoth with the crowbar. He successfully beat it to death with a crowbar and found a chest and his Heroic/Just Death clock.

Caliborn opens the chest which contains the object Vriska found while on the search through the Dreambubble for the item that can kill Lord English. He pulls the pendulum out of his Heroic/Just Death clock, destroying it and then breaking the clock with his crowbar in order to obtain immortality. After gaining his unconditional immortality, he sends John Egbert a threat on Social Media.

Caliborn tells us in Act 6 Act 6 Act 5 what happens to him after gaining Immortality. John uses his powers gained from touching the treasure to warp into Caliborn's room with the rest of the kids, answering the threat, but John, Dave, Rose, and Jade are instantly sucked into the Treasure by Caliborn. The other kids attack, but Caliborn easily defeats them, however, Gamzee is sliced in half. Jake uses his powers to create a hope field, stunning Caliborn so that Dirk can banish his soul. Dirk does not have the strength to do so and is about to be killed, but ARquiusprite suddenly appears out of nowhere and holds Caliborn long enough for Dirk to trap both their souls (and Gamzee's) in Li'l Cal. 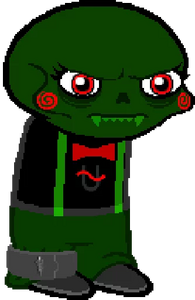