Capture Scylla.
Make his son, Fergis to become a heir of the kingdom Rule Seagundia through Fergis.
(all failed)

Caligo is the main antagonist in the 2014 direct-to-DVD animated Barbie film, Barbie: The Pearl Princess. He's the brother-in-law of King Nereus and Queen Lorelei, the uncle of Princess Lumina and the father of Fergis. He's also a general of Seagundia.

He's voiced by John Novak, who also played Djinn in the third and fourth Wishmaster films, Zeus in Supernatural, Faust in the English version of Adieu Galaxy Express 999, Jed McNally in Smallville and Jack Kirby in L.A.P.D.: To Protect and to Serve.

With Lumina was declared dead, Caligo persuades Nereus and Lorelei upon fairly its point out for letting his son, Fergis to being honorary heir of the kingdom. He forced Scylla to murder Lumina and make his son king. Under his immoral plans, Caligo tries to sent his eel minion, Murray in ordered having her poisoning the king's cup of merberry nectar such before joined the royal ball. Through by intends to tricks Scylla, Caligo could seizes his powers then knowing as states leader by himself therefore his son as the king. Scylla didn't have the heart to kill Lumina but never does this, she decided to protect her from Caligo and Murray.

Murray told Caligo information which mentioned that Lumina is the cousin of Fergis. After he noticed that his niece is 17 years old, Caligo eventually leads Murray to brings her to him. Caligo later gives his guards, Trident Squad to helped him by his requested meantime in within discovered that Scylla is in the royal kitchen. So Lumina is still alive yet, Caligo cheated by Scylla for very had does by pain out goes on of bad vigor. He also helped Murray and his crew to find her anyway. When nobody was there, Caligo and Murray are looking at the one bracelet with the royal crest, endures too bad is from worried that Lumina wasn't at her home.

Scylla begins making her various potions. Arriving in Salon La Mer with now, Caligo meets his niece and Fergis falls in love with nails and tails stylist, Cora. Lumina gives him a haircut and introduces Fergis to Cora. After leaving Salon la Mer, Caligo and Fergis attended the ball because Lumina was meeting Prince Delphin and wanted to dance with him. He starts scolding at Fergis for not dancing with the mermaids and removes his Sulfur Lily boutonnière in a fit of rage. Fergis is sad that his father yelled at him but Cora offers to dance with him and he feels happy. When Lumina is seen by her uncle, Caligo thanks his niece for cutting Fergis's hair. He offers Scylla nectar for Nereus.

Completing to party with Delphin, Lumina and Kuda were blackmailed by Caligo and Murray that he locked them into the dungeon. With toasted of the ball, Caligo taking a royal table with Fergis as Scylla would serves him by the cup of nectar. Nereus and Lorelei are appearing joins the party after their daughter's kidnapped. Although the cup is poisoned which leading by her. Scylla reluctantly grabbed Caligo's cup for what she has done from being poisoning. Caligo is eventually to switching the cups for the king casually then based his motion to that way. The king's cup is poisoned he doesn't dare to drink it every more than changed.

Lumina thinks that her father is trouble to Caligo, Kuda shocked for it. They escaped from the dungeon then managed returns to royal ball in stops the king for drinking nectar. Caligo saw Lumina attacking the king, he makes his guards to captured her. Scylla can explained that the nectar is poisoned and Nereus almost drinks where she said is Caligo's orders. When Caligo knocking down Scylla, pushing her into one of Spike's spikes that forces the poison in her body. Lumina helps Spike and Fergis find an antidote which is a Sulfur Lily that'll quickly heal her aunt. Plus, Caligo also gets angry to taking Scylla away was it have his guards to seize Lumina.

Delphin and Salon La Mer's owner, Madame Ruckus defeated the guards which allows Lumina to save Scylla back and stops Caligo in ended up his treachery. Aftermath, Lumina combines to the pearls powers by the mermaids, which trapping Caligo into ripple tornado of the spinning pearls and finally awakening Scylla. After Fergis tells his father that he didn't want to be king and wanted to be a botanist, he stuffs a plant into his mouth and all the mermaids applaud him. Caligo is trapped and is spun out of the kingdom by Madame Ruckus. The ball starts again and Lumina was reunited with her parents and later took pictures with them. 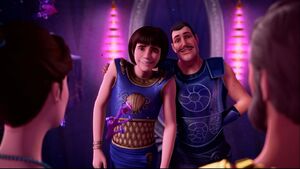 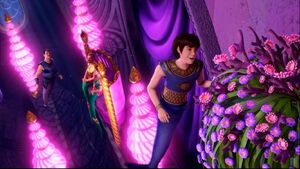 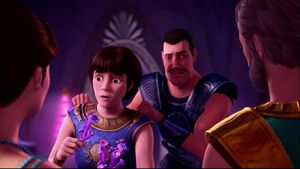 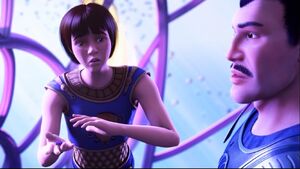 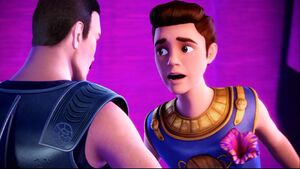 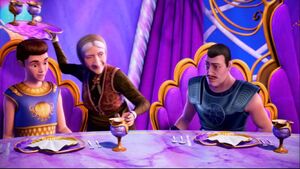 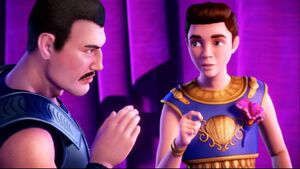 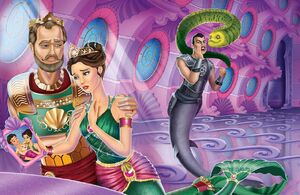