Acting as an agent

To help the Cohdopian Smuggling Ring succeed in its goals. (failed)

Calisto Yew is a defense attorney that appears in Turnabout Reminiscence, the penultimate episode of Ace Attorney Investigations: Miles Edgeworth as the true culprit of the case.

Calisto has a habit of constantly laughing at anyone whose mannerisms she finds hilarious, including Edgeworth. Calisto, When caught (as either Shih-Na or Calisto Yew) lets things slip in hints such as hinting toward who the real leader of the smuggling ring, and other clues.

She appears first in Turnabout Reminiscence, where she isn't revelaed to be evil yet until the end, but is able to escapes, after her deeds are uncovered.

In the final episode she appears again under the disguise of Shih-na. After her differentiating persona is revealed, she is arrested.

When defeated for the first time, she starts laughing hysterically, rocking back and forth. After she's done with all the laughing, she tries to shoot at Edgeworth (Who dodged the bullet)

When she's defeated as Shih-na, she starts laughing hysterically, much like the Calisto whom Edgeworth had met before. She notices it and stops with a final "hah," revealing herself as Calisto Yew. When "Shih-na" is finally defeated, she starts cackling, and after that, she suddenly starts laughing with fangs in her mouth, rocking her head back and forth. 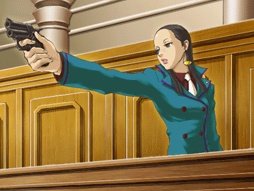 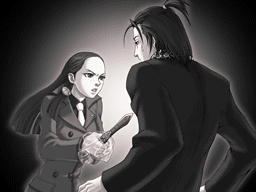 Add a photo to this gallery
Retrieved from "https://villains.fandom.com/wiki/Calisto_Yew?oldid=3975593"
Community content is available under CC-BY-SA unless otherwise noted.