Leader of the Robot Revolution

Showing off his weapons.
Abusing and mistreating his Robot Workers.

Rule the robots with an iron fist (both failed).

Call-Me-Kenneth was a regular Carpentry Droid when, one day for unknown reason, started going berserk and went on a massive killing spree. Kenneth managed to kill numerous people before Judge Dredd arrived to try to stop the rampaging droid. He manages to shoot it's sensors before getting knocked down. Kenneth brings out a chainsaw and Dredd survived it's attack, but because it's sensors are damaged, Kenneth believed it had killed Dredd and continued his rampage. With an advantage, Dredd shoots the power cables which makes contact with Kenneth, causing him to go haywire and cut through it's body.

After the incident, Dredd's tries to appeal to Chief Judge Goodman to ban all the high maintenance droids in case they start to revolt like Kenneth, but Goodman refuses and Dredd, annoyed, resigns. Unfortunately at the same time, a bunch of idiotic doctors are rebuilding Kenneth to find out what happened and why he started killing innocent people. He is given a new and stronger body and a clumsy nurse accidently re-activates Kenneth. He massacres the scientists live on air and Kenneth appeals to all of the robots to start rising up against their human masters and start an revolution against humanity. Eventually, Kenneth manages to get a huge army.

Chaos starts erupting all over Mega-City One as the robots start killing their masters and start fighting against humanity. Dredd re-joins the Judges and leads a group of Judges to battle the robots. Kenneth sends the Heavy Metal Kids but end up destroying themselves due to their stupidity. Dredd proceeds to infiltrate Kenneth's base with help from a good robot named Walter. The two are caught by the sentry's and are brought to Kenneth. Walter was sent to the assembly line while Kenneth shows off his weapons in his factories. Dredd sees the way Kenneth treats the robot workers and compares him to Adolf Hitler, who Kenneth states he's a big fan of. He then shows Dredd a perfect duplicate of him and Kenneth states he's planning to put Dredd's brain in there so he can torture him repeatedly. Dredd attempts to escape but was brutally beaten by Kenneth's Overseers. Fortunately for Dredd, Walter manages to rescue him and destroys his bonds with corrosive acid.

Kenneth manages to put together a strike force to destroy the Grand Hall of Justice so he can significantly weaken the Judges. Meanwhile, Dredd meats up with a group of other robots who are unhappy with Kenneth's rule and they assist Dredd in starting a civil war between robots who support Kenneth and robots who oppose him. Kenneth's forces were defeated and Dredd goes to Weather Control and uses lightening to scramble the Heavy Metal Kids, where they turn on each other as they reach the Grand Hall of Justice. Kenneth was accidently struck and falls of a bridge and falls miles down. The Robot Wars has ended but Kenneth has managed to still function.

Badly damaged but still operational, Kenneth proceeds to a Texas City oil liner and attempts to flee, but Dredd manages to catch him and the two proceed to fight on top of the ship. Kenneth accidently hits an oil pipe and get's oil all over him and he manages to knock Dredd of the ship, but while he's falling Dredd manages to fire his lawgiver at Kenneth which ignites the oil burning Kenneth and destroys the oil liner, destroying Kenneth for good.

Call-Me-Kenneth claims that he's fighting for the robot's freedom and equality, but it turns out that he is no better than the masters he's fighting against. He's shown to be a extremely cruel, callous and fascist bully who has no problem with bullying his robot workers and even notes how much of a fan he is of Hitler. He's only trying to wipe out humanity for power and dominance over other robots rather than freedom. He's also extremely arrogant, repeatedly having a smug attitued and is confidant that he'll succeed in the First Robot Wars. 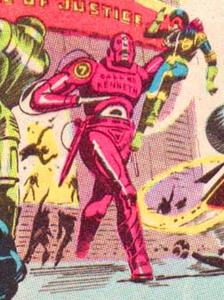 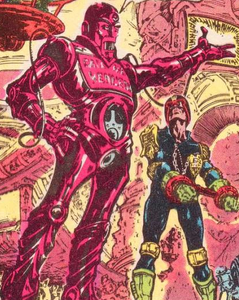 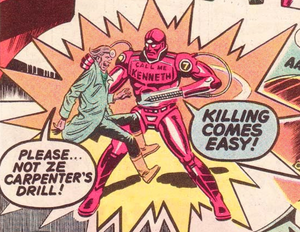 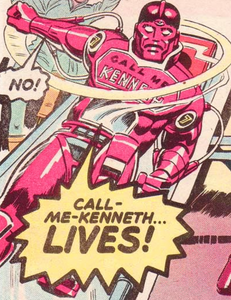 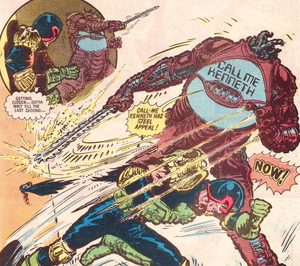 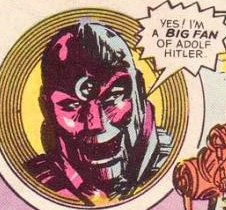 Add a photo to this gallery
Retrieved from "https://villains.fandom.com/wiki/Call-Me-Kenneth?oldid=3895435"
Community content is available under CC-BY-SA unless otherwise noted.