Agent of the Jupiter Empire

Callisto's Shadow is the secondary antagonist of the manga Mobile Suit Crossbone Gundam Steel Seven. He is the younger brother of the Jupiter Empire president Callisto's Light.

Just like his elder brother, Callisto's Shadow followed the ideal of Crux Dogatie, seeing the people of Jupiter as superior then the Earthnoids and desired to wipe the later out by making Earth uninhabitable. He is unable to understand why Tobia fought against him, just like how Callisto's Light question Tobia. Callisto's Shadow is also a ruthless pilot, being able to tear enemies apart with ease.

Callisto's Shadow, together with a squad of loyalist of Crux Dogatie, appears when Tobia was in a research lab on the Moon, which was developing a Mobile Suit called as Record Breaker that could reach the Jupiter Empire from Earth in a few days. In order to stop the Earth Federation from doing so, Callisto's Shadow ambushed the base and easily killed two test pilots of Record Breaker with his Cornix's overwhelming force and speed. After nearly killing Tobia, Callisto's Shadow later retreated in order to hurry up on the plan of destroying Earth.

Later, after Tobia's seeming failure in recruiting Giri Gadeucca Aspis into joining them in fighting against the Callisto twins. Callisto's Shadow, through his psychological connection with Eurpoa Dogatie, tracked them down in an attempt to capture Europa. Giri seemingly betrayed Tobia, but right before he swears loyalty towards Callisto's Light, he suddenly attacked Callisto's Shadow, as he is the only one that surpassed him in school. Nevertheless, Callisto's Shadow kidnapped Eurpoa and fleed in a shuttle, but was followed by Tobia. Then, Callisto's Shadow attempted to drop Tobia and Eruopa to their death, luckily, they were saved by Derek.

Later, in an attempt to stop the Steel Seven from obtaining the Mobile Suit Speed King to reach Jupiter region, Callisto's Shadow and his forced searched for it in the valley area, where the prototype Mobile Suit crashed. They encountered the Steel Seven and soon engaged in combat. In the end, even with the Cornix's superior power, Callisto's Shadow was shot down by Giri and Derek. Believing that the Europa died when she crashed her Mobile Suit into an enemy, he laughed and told them that they failed, only to realize that Europa was still alive. Callisto's Shadow's Cornix then collapsed as its pilot was fearing that he would die in vain.

However, right before Callisto's Shadow's death, Callisto's Light captured his little brother's mind and uploaded it to a bio-computer, thus saving Callisto's Shadow. They soon piloted their own custom Dictus and stopped the Steel Seven from ramming the Speed King into the colony laser Zeus thunder. They engaged in battle. Callisto's Shadow battled Derek in the Gundam F91 and Minoruin his Gundam F90. In the end, Derek found out the weak point of the Dictus, heavily damaging it with the V.S.B.R. system. With his last breath, Callisto's Shadow blasted at Derek's Gundam F91, killing him just before he himself was killed by Minoruin, avenging the death of the test pilots on the Moon base once and for all. 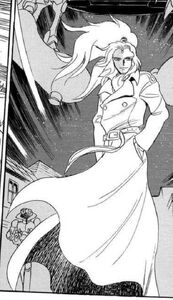 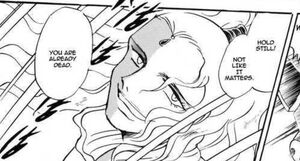 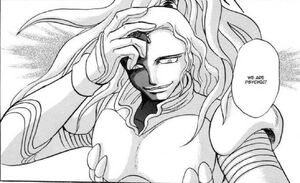 Callisto's Shadow as a bio-computer.