Mother of Kratos and Deimos

Caring for Kratos and Deimos.

Aid Kratos to find Deimos (as a human; succeeded).

Kill Kratos (as a monster; failed).

Callisto is a minor character and an anti-villain in the 2010 video game God of War: Ghost of Sparta. She is the mother of Kratos and Deimos.

She was voiced by Jennifer Hale (who also voiced Erinys in the same game, Alecto in God of War: Ascension, Renegade Shepard in the Mass Effect series, and Kronika in Mortal Kombat 11) in her young age, and Deanna Hurstold in her old age.

Years ago, Zeus was known to have multiple affairs with many mortals. One of them was a young woman named Callisto. They had an affair for some time, and while they were together, Callisto gave birth to two sons; Kratos and Deimos. Before Zeus was about leave them, he told Callisto not to tell them who their real father is, and disappeared. When Deimos was kidnapped by Ares, Zeus told her that he was the one who sent Ares to kidnap Deimos, as he posed a threat to Mt. Olympus, and that he was sent to the Domain of Death. He also told Callisto that she had to lie to Kratos, telling him that Deimos was dead and that he shouldn't be searching for him. Years later, Callisto was brought to the Temple of Poseidon by Zeus to live there forever.

When Kratos was searching for some answers about his nightmares, he journeys to Atlantis where he sees a vision of his family before entering a temple. There he encounters his deathly ill mother who tells her approaching son, she has truly missed him. At first, Kratos thought it was another trick by the Gods, due to thinking his mother to be dead. However, Callisto assured him that she's real before he examines her and realizes it is indeed his mother, to his shock. Callisto explained his father brought her there, as he is even more confused to learn he has a father. Callisto then told Kratos that she didn't have much time as she explains his younger brother is alive in the Domain of Death.

Callisto also told Kratos that she had to lie of his brother's fate as their father didn't want Kratos to know where Deimos was. When Kratos asked her who his father was, Callisto tried to whisper in his ear (though it's unknown if Callisto meant to tell Kratos that Zeus is his father or not).

After she tried to tell Kratos who his father is, she unexpectedly transformed into a monster and fought Kratos who is forced to fight her.

After a lengthy battle with his transformed mother, Kratos managed to knock her out. With Callisto incapacitated, Kratos proceeded to deliver the final blow, and then she reverted back to her human form.

After having defeated his mother in battle, Kratos then takes her into his arms as she uses her dying moments to thank him for setting her free, and encouraging him to pursue Deimos in Sparta and she slowly dies. Before she died she proclaimed that she was finally free, and told Kratos to go to Sparta find the answer he seeked. When she died in Kratos' arms, he was devastated at her death before her body disappeared.

Sometime after Kratos killed Thanatos (who killed Deimos) and returned to Olympus, the Grave Digger somehow managed to acquire Callisto's corpse. He carries her body and places her in a grave, right next to her late son Deimos. The Grave Digger paid his respects before he states "Now only one remains" before it is revealed there is another grave next to them.

While Callisto has no particular powers in her human form, her monster form on the other hand has several powers. Callisto's monster form has great physical strength, durability, and endurance. She also has razor sharp teeth and claws. It is also possible that Callisto is immortal, because she was living in Poseidon's Temple for some time, presumably 30 years, appeared to be gravely ill, and yet she was still living. 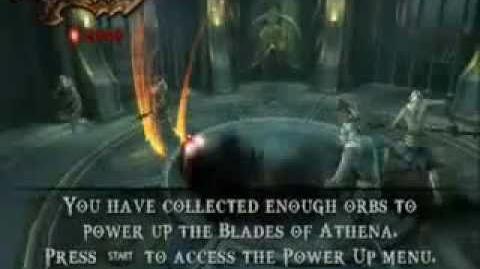