Leader of the Omega Gang

Member of Magneto's Brotherhood of Mutants

Help Magneto in his mutant revolution.

Callisto is a supporting antagonist in the 2006 film X-Men: The Last Stand. She is the leader of the Omega Gang who is allied with Magneto and the Brotherhood of Mutants. She is the archenemy of Storm.

She was portrayed by Dania Ramirez, who also voiced Red Velvet in Justice League Action.

As the young leader of a terrorist organization of mutant supremacists, Callisto is a cocky, malevolent, bitter, condescending, and arrogant woman, though she was pragmatic enough to form an alliance with Magneto to put an end to the Cure.

Being the leader of the Omega Gang, Callisto dedicated much of her mutant gang's happiness of spreading chaos against humankind due to the latter treating them as outcasts. When news of the discovery of a mutant cure became widespread, Callisto was very displeased, as she enjoyed her enhanced senses and super-speed and intended to keep it that way.

Deciding that the mutant cure should be destroyed, Callisto met up with Magneto and agreed to aid him and the Brotherhood in tracking down a mutant boy named Leech (whose powers are the source of cure). To that end, Callisto used her powers to track down several more members of the Brotherhood (such as Mystique, Juggernaut, and Pyro) to Magneto's plot, even overpowering Storm in Dark Phoenix's house. They manage to track Leech down to Alcatraz Prison, but the X-Men arrived to the rescue.

During the fight between the X-Men and the Brotherhood, Callisto noticed Storm using her powers once again, so she used her powers to initiate a rematch with her nemesis. At first, Callisto had the upper hand as her reflexes were enough to keep Storm at bay, but the latter eventually defeated Callisto by throwing her into a metal fence. Storm struck the fence with a sustained sustained surge of electricity, electrocuting her to death. Callisto never lived to witness her partner-in-crime being stripped of his powers, or to witness the massacre of her allies at the hands of Dark Phoenix. 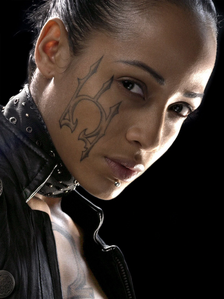 Callisto on the X-Men Movies Wiki