Cally's Tribe is a major antagonistic faction in the crime-drama tv series Criminal Minds. They are a xenophobic cult led by a sociopath named Jackson Cally who appear in the season one episode The Tribe.

The tribe was founded and led by Jackson Cally, a highly intelligent ex-convict. During this time, he claimed to have based it on love, but his real motive was to start an attack on five students having a party in an empty building. Ingrid Grieson, a member of the cult, apparently acted as a double agent, but was kidnapped by two men hired by her father. Even though she was taken, the rest of the cult (except Cally) proceeded with the attack. The BAU, with help from John Blackwolf, a reservation police officer, deduced that the perpetrators were copycats with little to no practical understanding of Native American culture. They figured that the American Defence Union, a movement founded by local businessman Roy Minton, could be responsible as the Native American community were in constant legal feud with them regarding the ownership of the land. After questioning him, however, the BAU figured he was innocent, but still ordered local police to place him under surveillance.

Since Ingrid's kidnappers had turned themselves in and explained that her father had hired them to get her out of the cult, the tribe's attack simply coinciding with the abduction.  They arrived first and managed to knock out three of the six attackers. When the other three realized that the police were here, they retaliated, forcing Blackwolf to fatally stab one of them and Hotch to shoot and kill another. The remaining attacker surrendered. Cally and the remaining members were then presumably incarcerated. The methods of killing used on the students had religious significance, but only it is highly unlikely that a single tribe would mix them all, suggesting that the Unsubs have theoretical knowledge about Native American culture, but no practical understanding of it. The group has  their beliefs are different from Native American religions, such as their belief in a Messiah. 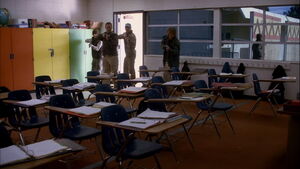 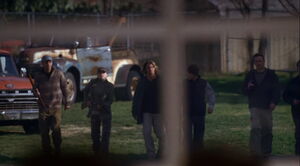