It (after it escapes)

Wipe out all life on Earth (depending it succeeded or failed).

Calvin is the main antagonist of the 2017 science fiction horror film Life. It is a deadly multi-cellular alien organism that is believed to have wiped out all life on Mars, therefore becoming an apex predator.

Calvin was later found and retrieved by six crew members aboard the International Space Station until he mutates into a monstrosity and escapes into the rest of the ship where it starts to cause carnage in its wake.

The lifeform was discovered as a sample of organic tissue, but began to grow into a multi-cellular form upon absorbing water and nutrients. Each cell belonging to Calvin is a muscle, a nerve and an eye at the same time while it is also semi-intelligent. Calvin was presumed to be a species who lived on Mars and dominated the Martian soil. In a "hibernation" state, the crew wake Calvin up, its first priority is clearly to grow in second and then ravage the crew.

Calvin becomes aggressive after being shocked by Hugh, attacking his hand while he is testing Calvin in the lab. Calvin then breaks Hugh's hand and uses a hand tool to escape from the container. Calvin then enters another container where a lab rat is being kept. After being bitten by the rodent, Calvin consumes the animal and grows slightly larger.

Rory attempts to kill Calvin with a flamethrower, but fails and the alien enters his mouth and devours his organs, accelerating its growth. Calvin escapes from Rory's body, and escapes from the lab via the vents due to the flamethrower, devouring the station's coolant for food.

Calvin is next seen when it grabs onto the ship's captain Ekaterina while she is in space trying to fix a communications antenna. Calvin causes her suit to break, which then water flows into her helmet, drowning her. However, she was able to prevent David from opening the door and letting Calvin back in. Despite this, Calvin makes its way back into the station through one of the thrusters.

Calvin then stealthily attaches itself to Hugh's leg which he doesn't feel because of his disability and feeds on him. Hugh tells the crew that he believes that Calvin wiped out all existence on Mars, and that it's only surviving. The blood loss kills Hugh and after the crew discover Calvin, it proceeds to chase them.

Another ship then arrives and attempts to push the International Space Station (and the crew in it) into deep space to prevent Calvin from reaching Earth, but Sho mistakes the ship for a rescue ship and tries to board it. After a struggle with Calvin, Sho prevents it from getting onto Miranda. Calvin kills the crew of the failed safety ship and Sho is dragged into outer space as the seal between the ship and the station breaks, depressurizing the module and causing critical damage to the station, which begins drifting towards the atmosphere, which will eventually cause it to re-enter and burn up.

The last two survivors of the crew, David and Miranda, come up with a plan to lure Calvin in David's pod that he will sacrifice himself to stop the lifeform from going to Earth. However, Calvin controls David's arm, and Miranda's pod is hit by debris, causing her to fly out into space. David's pod re-enters Earth's atmosphere and lands in Vietnam, a fisherman opens the hatch and sees Calvin slowly eating David. The film ends with Calvin's fate unknown, as it's assumed that it was killed by the military, or wiped out all of life on Earth.

Calvin resembles a white translucent cnidarian of some kind or a multi-headed planarian. Its translucent skin allows its circulatory system to be visible underneath its skin. As the film progresses, Calvin grows larger and absorbing and feeding off the crew, making his appearance look more grotesque. 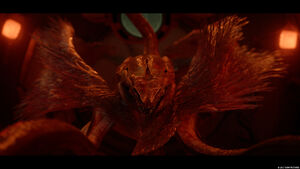 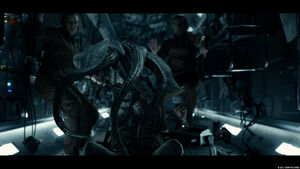 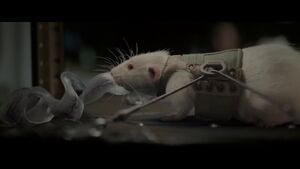 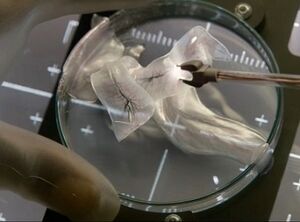 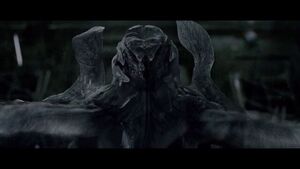 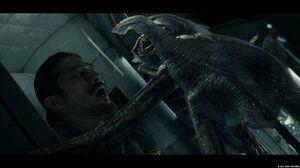 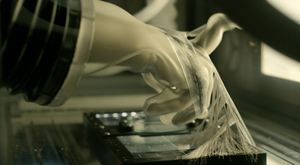